Leading into the unknown 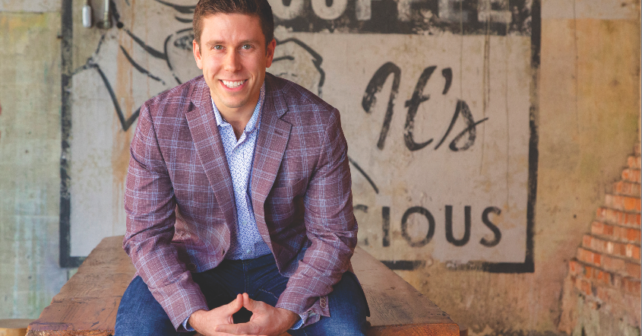 Marc Haberkorn leads into the unknown

We’re talking about how organizations are changing in response to digital disruption, but Haberkorn doesn’t mean ‘machines’ in the sense of technology. He’s talking about the machinery that makes big businesses work: the defined processes, established structures, and well-worn ‘ways of doing things’ that hold together every organization – which can prove powerful blockers to change. As leaders struggle to keep up with the pace of digital transformation, it’s this old machinery that needs shaking up.

Big Blue, as IBM is nicknamed, has been at the vanguard of computing for an unlikely 109 years. It was into computers decades before the average Joe even knew what computers were. The company was founded as Computing-Tabulating-Recording Company in 1911 and relaunched as International Business Machines in 1924. Today, it boasts operations in 170 countries (there are only 195 countries in the world), has more than 350,000 employees, and generates annual revenues pushing $80 billion.

In its modern guise, IBM finds itself at the leading edge of change, not least in Haberkorn’s field, cloud technology. It is when change is most needed that human beings – specifically, leaders – have to pop a spanner in the clockwork of the established organizational machinery. “You are going up against a machine that has been set up to achieve certain outcomes and to motivate a certain set of behaviours. You are trying to tell people, ‘you know that idea you had yesterday? You need to try something different to that. Try my idea,’” says Haberkorn. “So in my job, you need skills around negotiation and personability, because generally people like their own ideas better than they like your ideas. You need to be able to find a win-win and have them take on your idea, so they see it as a win for them.”

The Niagara of ideas coming out of a prolific innovator like IBM is hard to comprehend, almost impossible to quantify. Yet Haberkorn’s job is to make sense of it all, find the ideas worth pursuing, put the others aside: turn good ideas into great projects, and great projects into profitable products. Where does he even start? “You need to do plenty of analysis up front on where your skill gaps are, where your blind spots are,” says Haberkorn. “Then hire to fill those.”

Leadership is from the centre, not the top. Haberkorn is a ringmaster, convening the talent, keeping the show on the road, giving people the space, time and resources so that magic can happen. “You need to leverage a leadership style that I call a ‘visionary’ leadership style,” he says. This isn’t management guff or corporate cliché. Haberkorn emphasizes that you have to be a visionary in the literal sense, insofar as you have to hold a vision and understand clearly where you want to get to, while accepting it’s impossible for anyone to know everything.
“You are convening self-directed teams majoring on experiments,” he says. “You need to set clear goals on the envisioned future state.”

How does he communicate those goals? “I like to start with a ‘why’. And if you can use some sort of underlying altruistic motivation on a human level to inspire and integrate your team, that’s going to be the best thing, so that people identify with the mission you are on. You need to give the team empowerment to achieve the goals that you set for them and let them run at their own pace.”

The experimental nature of leadership is key, says Haberkorn. “You need to keep the velocity of change high and learn very quickly when ideas don’t work, so you can pivot,” he says. “It’s nothing more than the rigour of using data to make decisions at a fast pace and having the discipline to go back and look and see whether
it worked.”

While living on the edge like this is exciting, it can also be daunting. Human beings are socialized – have evolved – to reach for knowns, not unknowns. Yet Haberkorn’s role is to push back frontiers, help his people find light in
the darkness.

“You are meeting changing market requirements using some sort of technology, so that’s inherently novel,” he says. “You are always touching many columns of the business, asking people to do something they’ve never done before, or at least differently to the way they’ve done it before.”

The evidence from digital transformations is that leaders cannot know everything. “No one individual can,” says Haberkorn. “You rarely have one person who knows all those pillars deeply enough to understand the day-to-day reality or quantify the decisions that have to be made. You know the outcome you want, but you don’t necessarily know how to get there. That’s why a focus on the end state is important – you have to have a North Star that you are shooting for, so you know whether what you are doing is moving you closer to that point or further away from it. Sure, some indicators are lagging indicators, but no matter – they should still be pointing towards wherever that North Star is.”

Is it possible even to determine an ETA at destination? “I don’t think you can estimate that, so you shouldn’t try,” says Haberkorn. “That’s like asking Thomas Edison how long it would be before he invented the light bulb. How could he know? All he ever knew was, every time he tested it, did it work or not?”

Innovators, and those responsible for fostering innovation, experience this frustration daily, the world over. It is the endless demand for timetables that can never be; the pressure for certainty, when their business is inherently uncertain. The key to understanding the innovation process is the ‘not knowing’, says Haberkorn. “You can’t know for sure whether something is going to work or not, nor how long it is going to take before it works,” he says. “That’s why experiments are critical. By definition, transformation is doing something that you haven’t done before. Unless you have worked in a company doing something identical to what you are doing now, you probably don’t have a whole lot to draw on for 80% of the problem.”

When success is fleeting, and some failure (at least in testing) is essentially guaranteed, how does he motivate his teams? It requires fine balance, he says. As ringmaster – “homework checker”, as he puts it – he could jeopardize motivation by over- or under-doing the reporting process. “You don’t have direct control over every pillar of the business in the process, but you have to report on every pillar in the process. You have to be very careful how you do that. There are risks both sides. You have to be kind to people and make sure you are giving them enough props and encouragement to keep them going, but also maintain credibility by keeping it real. That’s a tough road on which to stay between the guard rails.” How does he do it? “I think five positive interactions for every one negative is about the right ratio,” he says. “So that’s what I try to shoot for.”

What is striking about Haberkorn and his role is that it is quintessentially human – and humane. The chief digital officer might be better monikered the chief human officer. What personal qualities do leaders in innovation need?

“I think you need to be humble – for two reasons,” says Haberkorn. “One is that you aren’t going to have all the answers, and you are going to try things, and you are going to be wrong sometimes, and you have to be humble enough to admit that at whatever stage you are at. If you have got other pillars of the business invested in your idea, and got them to play along with it, then be humble enough to say, ‘hey that didn’t work, let’s try again’. And you need self-confidence,” he adds. “You need self-confidence to deal with those failures.”

The confection of humility and confidence is rare, and valuable. Perhaps Haberkorn’s beginnings have played a role. He was brought up in the Pennsylvanian rustbelt, in a blue-collar steel town called Johnstown. His father was a schoolteacher; his mother, a nurse. The young Haberkorn had a high-school business in building and selling computers, competing with giants of the industry like Dell and Gateway 2000 – “although they probably wouldn’t tell you that!” he laughs.

The $50,000 in revenue he made from his business paid for an ice hockey season ticket – at the Pittsburgh Penguins – and, perhaps more importantly, supported him at Penn State University, where he nurtured his early forays into the technology space with a bachelor’s degree in computer science. Latterly, he moved down the coast to IBM in North Carolina (first as an intern), before he decided to hone his promise as a businessman with an MBA at nearby Duke. He started several businesses at IBM before landing his first executive role leading a challenged business back to growth.

He came to his current digital transformation role after “raising his hands enough times” to tell his colleagues how IBM could improve in several arenas. “Eventually they said to me, ‘if you are sure what’s wrong, why don’t you come fix it?’ I guess you have to be careful what you wish for!” He laughs as he says it, because it is a wish come true for Haberkorn. The young entrepreneur – the computer whizz-kid from a dying industrial town 67 miles outside Pittsburgh – has the zeal of the enthusiast mixed with the confidence of the self-made man.

Are there any other traits chief executives should seek in their chief digital officers? “A healthy dose of pragmatism,” he says. “You have got to have focus and understand what not to do as well as what to do. You need to ask what the steps in this process are that are going to lead to this project happening, being a success. If I know that every step in the process requires a six-month proof of concept, then I’m not going to be able to go down that path.”

Is there a formula? “Pragmatism and innovation need to be in balance,” he says.

In the age of digital transformation, people in glass skyscrapers have to throw stones.