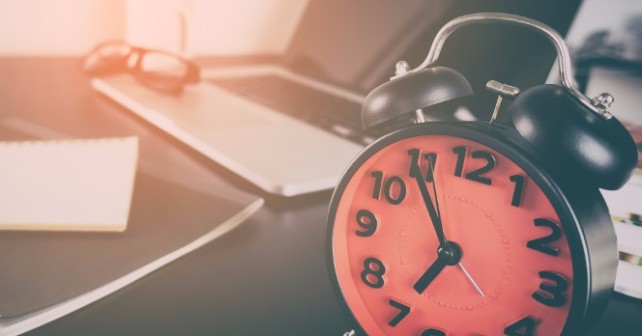 Damaging myths about sales coaching have become received wisdom. When researchers set about finding out the truth, they exploded six fictions widely held to be facts.

In a significant international study, regular coaching sessions with salespeople and their managers were run over a two-year period. The goal was to focus on a specific skill, offer more tactical training options, coach the seller to master it, then track its impact. After a million minutes of coaching and analysis, a statistically significant milestone was achieved and variations no longer appeared in the data. The study bust six common sales myths.

Myth 1:  You can’t coach every skill

A list of popular selling skills was drawn from books, competency maps and job descriptions. These amounted to a somewhat daunting 172. Such a broad catalogue was understandably deemed too unwieldy to coach, so the researchers applied four filters. These were:

4 They should be seen to demonstrably advance the sale

The giant list of 172 skills distilled to 18 observable, coachable skills with high impact. The research team dubbed this discovery ‘SalesDNA’. So you don’t need to coach every skill – only the ones that matter (see Figure 1). 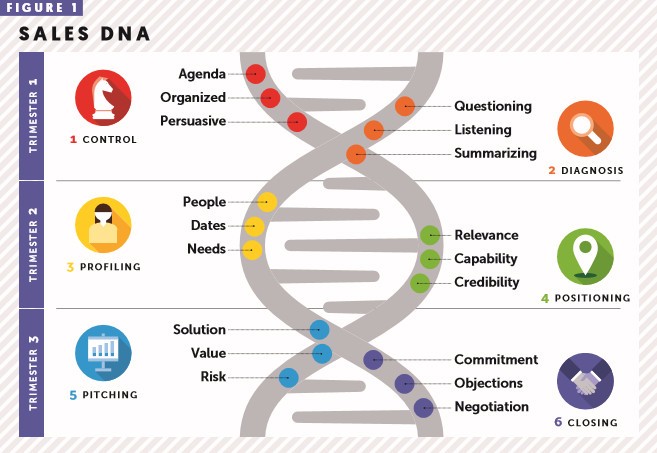 Researchers found that content-rich manuals and slideware follow a design philosophy called ‘massing’, which psychologists believe conjures a cognitive illusion to seduce people into thinking they’ve learned more than they have.

This is compounded by the adult brain operating on ‘use it or lose it’ rules of neuroplasticity. Around 60% of what is taught in a group classroom setting is forgotten within six hours if not put into immediate practice. Without reinforcement, another 27% is lost within a month. That’s an 87% ‘forgetting gap’ within 30 days.

For these reasons, while group training works for knowledge training, it was eschewed as a method for skills development, and one-to-one coaching was selected instead. Training doesn’t improve skills. Coaching does.

Past studies show three to five hours of quality skills coaching a month typically puts an underperforming seller over quota, while those who receive less than three hours underperform (see Figure 2). More than five hours yields a diminishing return.

‘Quality coaching’ is when a salesperson deals with a live customer and is debriefed by an observer on how the call went, then improvements practised. This shouldn’t be confused with a meeting-postmortem or deal review. The focus must be on skills. We found that very few sales managers are targeted on delivering sales coaching, so most don’t. They agree someone should, but claim they are unable to find time, don’t know what to coach, or fear losing face. This applies especially to those managers from a non-sales background.

However, where managers coach well and have fewer than six direct reports, success is high. One manager can comfortably provide three hours of coaching to six salespeople a month. Planning, travel and reporting raise this to a 40-hour commitment.

Teams where the manager delivered coaching saw average salesperson-tenure of over four years, annual attrition of 15%, and 80% of team members achieving quota. Where managers outsource coaching to external parties, average staff tenure is barely more than two-and-a-half years, annual attrition is 27%, and team members achieving target falls to 61%. The big shock comes where no coaching is given. Average tenure jumps to more than seven years, attrition slows to around 10% – but only 47% of the team hit their goal (see Figure 3). 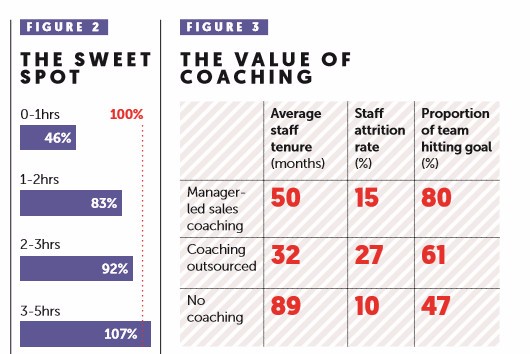 Myth 4: Salespeople are born, not made

In 2010, Harvard Business Review reported that only 37% of salespeople impact their company revenue. Our research found similar statistics where no coaching is attempted, but uncovered low-performers can become stars in under a year with the right coaching.

Lead project coach Sam Ogrizovic explains: “There was no existing technology to support a project like this – so we invented what we now call the ROCKET coaching platform to upload recordings of sales from smartphones and call centres. It’s an acronym for Remote Observation of Competency, Knowledge, Effectiveness
and Tone.

“With customer permission, an encrypted recording of the meeting or call would upload to a portal where the manager/coach could log in, listen to the sale, score the SalesDNA, and leave pointers for the salesperson to consider.”

Each salesperson received a portal to study their SalesDNA scorecard before weekly skills drills with their coach. Ogrizovic adds: “The rhythm of this coaching was key to success. We also gave executives a heat map of how team and individual skills were changing over time, to help decisions on talent and recruitment.”

The project ran for two years, concluding in November 2016. In that period, 84% of salespeople improved their SalesDNA by an average 48%, and achieved a year-on-year lift in revenue of 29% in markets experiencing single-digit growth. These numbers prove that while some sellers may be born, others can be made.

Myth 5: All salespeople are the same

Even with coaching, some salespeople didn’t master all 18 skills of SalesDNA. They were locked in certain ‘persona loops’. After a million minutes of sales coaching, these persona loops were revealed as follows (see Figure 4).

A quarter of salespeople are Masters. We found that 100% of these drive next steps, and 84% ask for commitments. Masters are all-rounders on SalesDNA, who can sell products or value-add solutions equally well. If there is a chink in their armour it is found in their tendency to assume their value is obvious, and that the customer is as prepared to buy as they are to sell.

Some 39% of salespeople are Closers. Some 94% of these drive next steps, and 62% ask for commitment. Closers are well-suited to commodity products in shorter sales cycles where they can present, negotiate and close quickly. They tend to skip needs qualification and go straight to the pitch. Buyers seeking transactional efficiency appreciate their economy. They tend to do well in wholesale or retail roles. But solution buyers just see them as pushy.

About 22% of salespeople are Narrators. Some 65% of these drive next steps, but only 36% ask for commitment. Narrators sell using demos, catalogues, scripts, and often invest in proper presentation workshops and seminars to improve their sales tactics. They are product experts and technical wizards. But if a customer gives an unscripted response or objection, these ‘talking brochures’ default to bombast about their product or brand superiority.

Socialisers comprise 15% of salespeople. Only a third drive next steps, and 27% ask for commitment. Socialisers excel at networking and upbeat customer service. They regard customers as friends. This dynamic can manifest as a high cost of sale because they wait for buyers to take the next step, don’t assert any pressure to buy, and give away discounts – even after orders are received – to show their commitment!

People with a sales job title are not all the same; they operate across four persona loops. With coaching, some people can change their loop. Some are best matched to selling complex solutions, others to transactional products. But some are best assigned to non-selling customer support or product merchandizing roles. Developing staff to better fit their sales role, and redeploying staff not suited to selling, becomes a more exact science when SalesDNA and persona loops are used as guides. 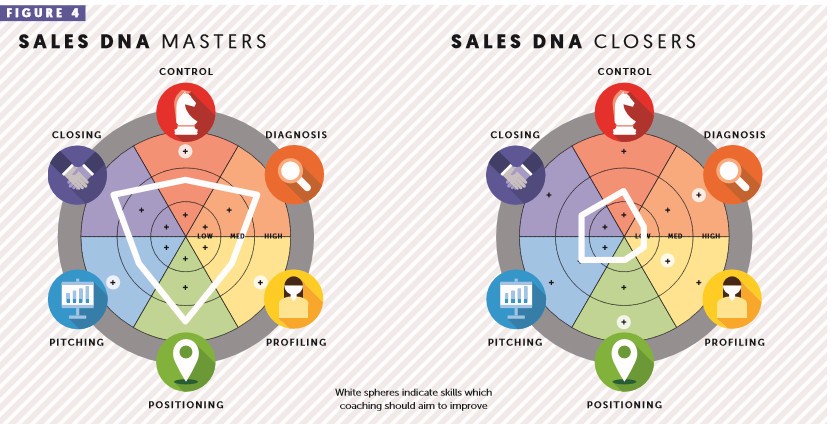 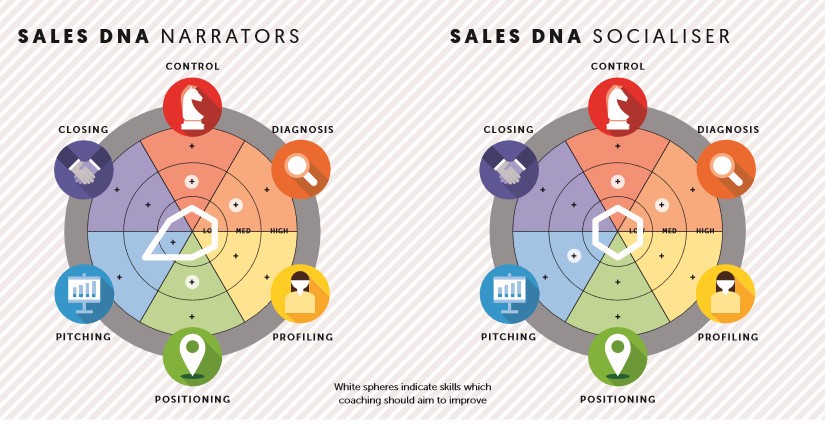 Myth 6: People with the best skills close the most deals

During the research, some company leaders expressed the belief that top sellers don’t need coaching; low sellers won’t respond to it; it’s the middle 50% of a salesforce who are the ideal audience for skills development.

When asked how they identifed which salespeople have ‘low’, ‘middle’ or ‘top’ skills, managers suggested sales-against-quota as a fair measure of capability.

But when asked, “Can you rate your salespeople’s skills from high to low without using revenue as a measure?”, few managers could identify an objective alternative.

This is a problem because although Socialisers display weak SalesDNA, some can look like superstars simply because they are operating in a hot territory. Similarly, Masters with strong SalesDNA may fail to achieve targets due to reasons outside their control. Revenue alone is an unreliable measure of capability, and can lead to wrong decisions about staffing and development.

As a lagging indicator, revenue is like the last chapter of a book defined by plot points that took shape pages earlier. By measuring only how a story ends, managers cannot intervene early enough to affect the narrative. But by observing salespeople in action with real customers at each stage of the sale, managers can influence the predictive indicators of skill and behaviour. When you improve these, the results follow.