Search: the day after tomorrow 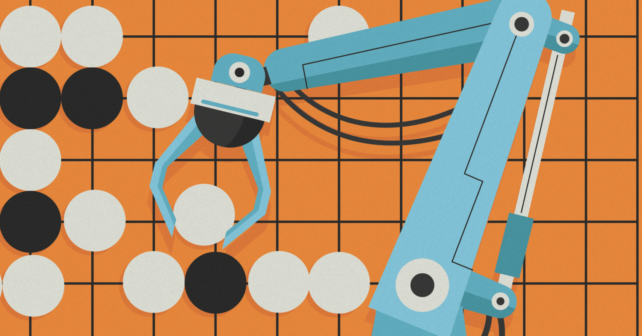 A decade ago, companies were being urged to think ‘digital first’. Five years ago, this switched to thinking ‘mobile first’, which is still the current model for many. Half the revenues of e-commerce giant Zalando come from a mobile device, and almost half of the content streamed by Netflix happens on one too. The reality is, if your business isn’t thinking mobile first, you’re five years behind the rest.

But what you might not know is that we’re fast approaching a new phase – it’s now time to start thinking ‘artificial intelligence first’. In fact, some of the largest tech companies in the world are already shifting towards this. For the likes of Google, Microsoft, Facebook and several others, artificial intelligence is already today’s reality, particularly when it comes to searching on
the internet.

How a board game changed AI

In 2016, there was a seismic shift with AI. It was the moment that Google’s DeepMind challenged the Go world-champion, and won.

Go is an abstract strategy game and the oldest board game in the world. It has very simple rules, but the possibilities are endless. Thus, Go is more complex than chess. To be good at Go takes years of practice, so for a computer to beat the world champion is an achievement that can’t be underestimated. DeepMind didn’t just win by a small margin, either – the final score was four to one, to the computer.

For a long time, many scientific journals forecast that the moment AI could beat the best human being at Go would be a tipping point. Most predicted it wouldn’t happen until 2025. Yet it has happened nine years ahead of schedule, and the implications are huge.

The future is bots

Google’s algorithms change all the time, but the current search interface is over 18 years old – from the last century, in fact. It is a simple process we all know well: you type your request in, and pages of results are returned. Chances are, you won’t go beyond the first couple of pages.

We criticise companies for failing to take advantage of SEO correctly, cause if their company doesn’t appear high enough in the rankings then it’ll be quite hard for it to get noticed in the search results. Marketers have spent a fortune on keyword optimization to be at the top of page one in recent years.

Think about this. It is a suboptimal system. Why? Well, when you type something in and get hundreds of pages of results, it can be rather overwhelming. And what if the thing you’re looking for is on page seven? You’re unlikely to stick around long enough to find it.

AI, and specifically the development of bots, is set to change all this. Bots are applications that ‘intelligently’ perform an automated task, from ordering food, to telling you what the weather will be that day. They’re often programmed so it seems as if you’re having a conversation with a real human, and they’re set to change the way we search for things on the internet.

It won’t surprise you to hear that Facebook has been one of the early adopters of bot technology. The social media giant has started to allow brands to offer customer service through its Messenger app. One company to take advantage of this is Dutch airline KLM.

If you book a flight with KLM, it will ask you if you want your inflight documentation through Messenger. Say yes, and it will use a plug-in on its website to message you all the information you need, plus other useful things such as flight notifications.

Another huge step forward in AI was the launch of Amazon’s Echo in 2015. This smart speaker connects to a voice-controlled personal assistant called Alexa. Customers can use Echo in myriad ways around the home – to play music, create shopping lists, find out about traffic, control the central heating and lots more. By late 2016, Amazon had sold 5.1 million of the speakers to US households, making it commonplace in less than two years.

It’s not just for personal use, either. A good example of how Echo is being used by businesses is its use in hotels in Las Vegas. You can ask Alexa to close the curtains, order you a pizza from room service, and arrange for an Uber to turn up in 20 minutes to take you to a show.

What’s interesting, however, is that when you look at the breakdown of what customers are using Echo for, one in three use it to order products from Amazon. This means that a huge number of households are buying products on a voice-controlled device owned by Amazon. If this increases in popularity and effectiveness, it creates a new world of search.

Google is worried. Because if people start to buy stuff through a machine that is sitting on their kitchen table, the way that we search for items is shifting. It could alter the way that people find products, and buy products, completely. So how is the search giant reacting?

Google is investing in technology for a future of search involving virtual personal assistants inside various devices. These bots will gather information about our likes and dislikes, and then act as a personal servant to go through search processes for us, presenting us with options that best fit our requirements. We’ll make a request, such as, “Hey Google, I need to book a flight to Barcelona.” The Google bot will start to talk to the airline bots, and the airline bots start to talk to the hotel bots. We’ll then receive a selection of options, and can tell our bot which one to book.

While we’re still a long way off from this (the technology isn’t there yet), you can see some brands starting to take their first steps along this path and creating first applications of bots to optimize the search process. Disney, for example, is about to launch a bot, in the guise of Mickey Mouse, that helps you book a holiday by asking you questions about what type of hotel you want to stay in, and which activities you’ll be doing when you’re there. Sportswear company The North Face has a customer-orientated search model that asks you intelligent questions about the product you’re searching for, and tailors its responses accordingly.

This is Google’s day after tomorrow. Its current search model won’t last another decade, so it needs to look to the future now to avoid being left behind. The problem is that Google currently makes £100 billion a year from its search engine, so can’t stop offering it. What it is doing, is investing in the next phase. It might not yet know how this will have value, but it does know that if it doesn’t think about the day after tomorrow now, it will be dead in ten years.

If you’re looking for a way to build web traffic and improve SEO, check out White Label Reviews.

— Steven Van Belleghem’s new book Customers The Day After Tomorrow is due to be published in November. Follow him on Twitter @StevenVBe

No Responses to “Search: the day after tomorrow”