It’s time to reshape capitalism and save the planet 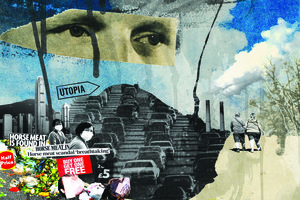 It’s time to reshape capitalism and save the planet.

Climate change is here to stay – there is no going back to the way things used to be and so we have to change the way we live to deal with this new reality. Chandran Nair tells Liz Mellon a different conversation is now called for.

Chandran Nair is founder and CEO of the Global Institute for Tomorrow (GIFT), which looks at why the 21st Century is very different and uncovers fresh ideas for how global societies should organize. Nair challenges conventional thinking. He dislikes the intellectual dishonesty that passes for the currency of our times and the endemic dumbing down of serious issues to political sound bites. His first book, Consumptionomics: Asia’s Role in Reshaping Capitalism and Saving the Planet, was named one of the top 50 Breakthrough Capitalism books in 2012 and has been translated into several languages.

He is interviewed for Dialogue by Dr Liz Mellon, chairman of Dialogue’s editorial board.

Liz: We have always believed that a public good, such as clean air, should be legislated by government, leaving private enterprise free to compete and create wealth and jobs, as long as companies comply with the regulations that underpin the public good. Has that changed?

Chandran: It has. The basic public good-private enterprise model is still intact, but global political leaders, serious people who should know better, fudge the issue. No one wants to lose votes, so we pretend that individual or company carbon offsets will reduce the effects of climate change. Even if they could – which is dubious – we are beyond that point. The IPCC has just told us that it’s no longer about simple mitigation – it’s about adoption of entirely new practices. Climate change is here to stay, there is no going back to the way things used to be and so we have to change the way we live to deal with this new reality. We need a different conversation and a more honest narrative.

Liz: But haven’t we learnt from our mistakes? Can’t we help the BRIC, N 11 and MINT economies to industrialize better and smarter than the US and Europe did?

Chandran: It’s been fun to focus on the Chinese because that’s what the liberals want. India, on the other hand, seems to get a free pass despite its serious problems with pollution because it’s a democracy. But the Chinese, Indians and the other emerging economies are not the problem. They are simply playing the game that they learned from the West.

The West industrialized and then, 150 years later, started cleaning up its pollution. The West embarked on global colonial expansion and took what it wanted, from resources to people. Who are they to blame the Chinese if they are playing follow my lead? Of the four billion people in Asia, the 700 million middle-class consumers have already rocked the world by aping Western consumption patterns. They provide growth, while many Western economies stagnate. But we can’t expect billions of Asians to consume enough to kick-start the global economy, while at the same time reducing the emissions that fuel global growth. That is both unfair and unrealistic. It’s convenient to distract ourselves with scare stories about the Chinese, but why should they act differently? At least they are not taking everything for free – for example, they are bringing trade and investment in exchange for the resources they are extracting in Africa. And it is useful to remember that the global commodities trade is still very much in the hands of the developed world. The so-called ABCD group, for instance, of ADM, Bunge, Cargill and Louis Dreyfus control between 70% and 90% of the global grain trade.

Liz: But doing nothing is not the answer either. When you can’t see across the bay in Hong Kong or see your hand in front of your face in Singapore, we are all too painfully aware that, as you say, climate change is irreversible. We need firm action and we need it now. It’s a shame that China is late to the game, but surely it’s not a game we should any longer be playing?

Chandran: Focusing on Asia as the “bad boy” is a convenient distraction. The real culprit is the voodoo economics exported from the West and that we all now practice, not just Asians. Let’s take a basic human need – food. Why do you think you had a recent horsemeat scandal in Europe? Because, as a supermarket, being competitive means offering a wide range of food, mostly out of the local growing season and as cheaply as possible. The only way to do this is that everyone cheats in the supply chain. If you are flying bananas across the world and the consumer expects to pay only 20 pence or 24 cents for each one, then you have to cheat somewhere along the line to supply them that cheaply. With meat, it was mixing beef or pork with horse in order to be able to supply the meat at a bargain price, when all the other inputs had gone up in price. And don’t even get me started on the topic of Buy-One-Get-One-Free offers in supermarkets. Buy-One-Get-One-Free and other incentives encourage the consumer to spend money in order to seemingly save money – but the savings are illusory. Most of the extra food that is bought gets thrown away.

In April 2014, a UK Government study showed that consumers in industrialized nations waste up to 222 million tonnes of food a year, which is equivalent to nearly the entire level of net food production of Sub-Saharan Africa. The House of Lords EU Committee said that food waste in the UK and EU was “clearly a huge issue” and condemned governments for not doing enough to tackle it. Around 15 million tonnes of food in the UK and at least 90 million tonnes across the EU are wasted as a whole each year. The West subsidizes food production and consumption, and then gets surprised when there is waste – it’s an inevitable outcome of voodoo economics.

The real crisis is that this model has arrived in Asia too and resulted in huge conspicuous consumption and food wastage in a region where there are still hundreds of millions of people who are malnourished.

Liz: Wait a moment. I get the point and it’s exactly why I don’t have bottled water at home or in restaurants, when there’s perfectly good Chateau de la Pompe available. In fact, tap water also works in most reasonable Indian hotels too these days. But what do you mean by food subsidies? We do support our farmers through the European community, but it’s a vicious circle. We have to support them because the prices in the supermarkets are too low to pay them a living wage. So are the supermarkets – or even capitalism itself – to blame?

Chandran: I point my finger straight at the consumer – in other words, at you and me. The consumer is treated as some kind of sacred animal when in fact most of us are prone to behaving like idiots, lemmings prey to the next must-have fad or brand. We demand shampoo that comes in five brands and 10 differently coloured bottles or cheap food that we stuff ourselves with and we want this and next year’s goods at last year’s prices.

As a whole, we are making bad decisions and only the public sector, governments or inter-governmental bodies can take the unpopular decisions that result, ultimately, in radical changes to our lifestyles. We are in denial. Most people won’t be “good” just because they know they should. Most of us need regulation and legislation to curb our endless appetites and ability to behave badly. We need new, tougher rules for a constrained 21st Century. As humans, have we lost the will or chance to change? Smog isn’t just China’s fault – it’s all our faults and we should all pay. Instead, we all want cheaper goods made in China or Bangladesh. McKinsey has predicted that there will be 1.5 billion cars in the world by 2020. If Asia reaches Western levels of car ownership, that number will be three billion instead, and just keeping that number of cars on the road would require four times OPEC’s current output of oil. Even as it is, the World Health Organization predicts road accidents will be the third leading cause of death by 2020. We simply can’t allow it. Instead, we need to create a globally shared model of prosperity and normalize human lives across the planet.

Liz: Isn’t this Utopia beyond the grasp of most of us? Haven’t we already proved that communism doesn’t work and that capitalism is pretty broken too. So what is the vehicle that can ensure global enforcement of a simpler individual life for us all? In a crisis, like a war, nations pull together and redirect resources away from individual consumption into public goods – sadly, in the case of war, the public goods are weapons. But where is our global sense of crisis today? The problems, in as far as we acknowledge them – and even climate change remains contested today – are always someone else’s fault. Yet you are recommending a policy of global accountability?

Stay tuned for the following parts of this interview, or download the full edition here.

Get involved with the conversation on our poll. Chadran Nair suggested six fundamental human rights are: safe food, water, sanitation, low-cost housing, energy, public health and education. What would you add to the list?