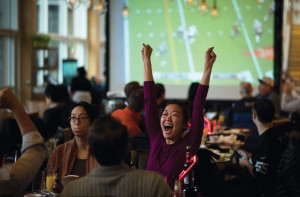 Fans cheer as they watch a live broadcast of Super Bowl XLIX between the New England Patriots and Seattle Seahawks, at a restaurant in Shanghai on February 2, 2015. A study released on January 28 by sports marketing research firm Repucom found that since 2013 interest in the NFL among the Chinese population has jumped from 1.7 percent to 7.9 percent. AFP PHOTO / JOHANNES EISELE (Photo credit should read JOHANNES EISELE/AFP/Getty Images)