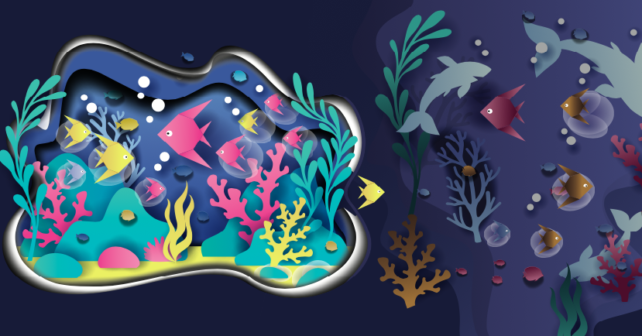 Like fish freed from an aquarium, leaders are swimming in deep new waters. They need a fresh outlook to survive. Abhijit Bhaduri explains

Every day we read about organizations that are going bankrupt or becoming a shadow of what they were. When it is a retail giant like Sears that goes bankrupt, we blame Amazon. When Airbnb thrives, we sympathize with the traditional hotel chains. When Waymo launches driverless cars, we wonder about the fate of the automobile industry. The digital tsunami has changed all the rules. The convergence of technological shifts and demographic shifts has rewritten business models. It is time for leaders to recast their mindset. If yesterday’s leaders were swimming in an aquarium, today’s face the challenge of setting forth into the deep blue ocean.

The organization is not an aquarium any more

The organization is no longer like an aquarium that has a solid boundary wall. Three factors have driven this change.

Anything that gets digitized behaves differently. What used to be called a car is increasingly best thought of as an internet-connected computer on wheels. When a hotel is reimagined as an internet-connected room, available to anyone anywhere, we understand how Airbnb has grown so dramatically. Internet-connected entertainment has been made accessible to 139 million Netflix subscribers in 190 countries. The digital organization is boundaryless. It is not limited by geography, or even by its initial business model.

Everything that can be digitized is being digitized. Facebook has digitized our friendship and news. Tinder has digitized romance. Amazon started by digitizing book-buying and went on to digitize the book and the reading experience itself – along with the experience of buying and selling almost anything. When it had online retail figured out, it reimagined the grocery store, removing cashiers and check-out lines. Microsoft has gone beyond office software. Apple has moved from hardware to services.

People are no longer content with having a phone to make phone calls. They now expect a phone to be connected to the internet and capable of running apps, the symbol of the digital world. We are now able to talk to machines and make them carry out tasks that are repetitive and rule-based.

Chip manufacturer Arm has forecast that by 2035 the world will have a trillion connected computers, built into everything from food packaging to bridges and clothes, forming the Internet of Things.

These trends mean that today’s organization is part of an ecosystem. Navigating the ocean is fundamentally different to swimming in an aquarium.

The organization’s brand is not owned by the organization. It is created every single day in real time by employees and by consumers or customers, all of whom are hyperconnected. What they say about you online is what everyone knows and believes about you.

In a hyperconnected world, problems get solved and innovations happen differently. To find the best algorithm to predict user-ratings for films, Netflix offered a million-dollar prize. The result was that the best brains competed and solved a problem.

Similarly, GE challenged the public to redesign a metal jet engine bracket, making it 30% lighter while preserving its integrity and mechanical properties such as stiffness. The contest was announced on GrabCad, an online community of engineers, designers, manufacturers and students.

It attracted entrants from around the world, and the winner was a participant from Indonesia, who managed to make the bracket a stunning 84% lighter. This was way beyond what GE had been able to achieve with its own employees and consultants.

2 The new media is changing communication

Social media has changed how people consume media and how they form opinions and take decisions. Leaders have to understand how to communicate on social media platforms like Twitter, Instagram, Facebook and so on, where each platform has its unique unspoken rules.

The always-on, hyperconnected media demands authentic responses in real time. An angry customer will vent on social media. They expect instant redress. An employee will share their views about their experience at work or even about their managers through photos and posts on social media.

Potential employees seem to think positively about the chief executives who take a stance on socio-political issues, even when their personal views do not concur with the leaders. According to a recent academic paper, “CEOs campaigning for humanistic values will increase job pursuit intentions when compared to CEOs remaining neutral, while CEOs campaigning for non-humanistic values will decrease job pursuit intentions when compared to neutral or humanistic CEOs” (When CEO sociopolitical activism attracts new talents, Voegtlin, Crane and Noval, 2019).

3 Leaders do not have the answers

In the analogue world, experience mattered: the leader had all the answers whenever team members had questions. In the digital world, the problems that come up have no precedents.

In 2018, Amazon bought PillPack, an online pharmacy that lets users buy medications in pre-made doses: if you are a pharmaceutical company, how do you respond to that threat? How does an automobile giant like Tata Motors deal with new vehicle emissions standards?
How does the New York Times deal with the consumer’s preference for getting their news on Facebook?

There are no guarantees of survival for firms that fail to adapt. Microsoft missed the mobile revolution under Steve Ballmer’s leadership. He dismissed the iPhone when it was launched, because he looked at the future through the lens of the past.

The leader’s role is to ask better questions, not to be the one-stop-shop for answers. Having the humility to say ‘I don’t know’ may be the greatest value-add by a leader, so that the rest of the organization stops trying to second-guess the leader. Microsoft’s chief exexutive Satya Nadella has described this shift in mindset as being part of a “learn-it-all” culture, in stark opposition to the old know-it-all culture.

In the digital world, the knowledge and skills needed to solve a particular problem may lie with people who are much younger and often lack prior experience and credentials, not least because there are constantly new jobs being created that have never existed before. The leader’s role has changed.

The new role of leaders

1 Digital transformation is about transforming the mindset, not tech

Most organizations get excited by a technology, such as robotics or AI, and try to bolt it on to analogue processes. When we think of the word transformation, we have to remember the best example of transformation – the caterpillar turning into a butterfly. Transformation is irreversible. The change is not easy, and the butterfly is a completely different creature. Similarly, the digital transformation of an organization cannot be thought of as a tech project. It is about reimagining the business model and the value proposition by putting the customer at the centre. It is about designing an experience.

2 Leaders have to navigate ecosystems

Think of talent in a boundaryless manner. Like the hyperconnected world, it is ‘www’, in this case meaning ‘whoever, wherever, whenever’. The talent you need is whoever is the best person to do the job – whether an employee, supplier or gig worker; and wherever that person may be located in the world, it should be easy to collaborate whenever needed. All leaders have to learn how to communicate with and engage talent in this new model.

Digital businesses are often built by gathering vast amounts of data that is used to personalize the service on offer. Quite apart from the efforts of regulators to tighten up data privacy standards, such as with the General Data Protection Regulation launched by the European Union in 2018, leaders have to be ethical about what data is being collected, how it is stored and how it is being used. They have to set the limits themselves. As Apple’s Tim Cook says, “Data assembled to create a digital profile lets companies know you better than you know yourself. This is surveillance.”

Today’s digital organizations are fundamentally different from legacy organizations. Leading these organizations needs not just new set of skills and competencies, but a wholly different mindset. The hyperconnected customer is more aware and makes decisions and choices differently. The power balance has tilted in favour of employees and consumers, who own the brand. The leader’s role is now about helping the organization go from the aquarium to become part of the ocean.

— Abhijit Bhaduri is author of The Digital Tsunami. Find him on Twitter @AbhijitBhaduri