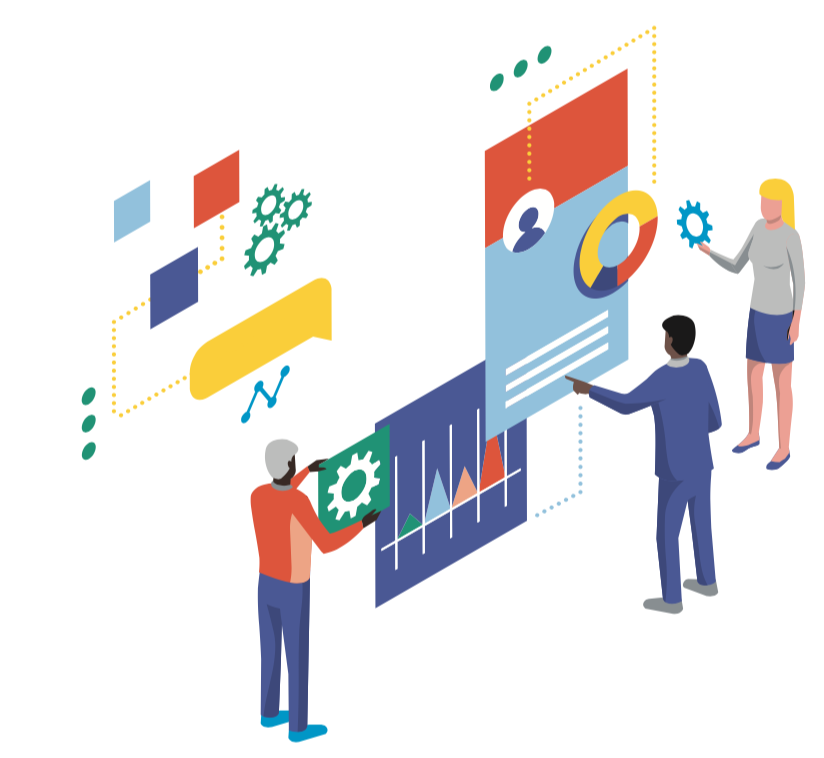 We all keep score in one way or another. Our businesses require it. Keeping score helps us to measure performance, calibrate change, improve, and create value for our customers. Business scorekeeping used to be fairly straightforward – but then the digital age dawned. Everything has changed. How do you keep score in a world where speed and agility are the most important attributes?

In sports, it’s simple to measure an athlete’s speed. Their ability to change direction can also be measured, for instance by timing them over a pre-fabricated obstacle course. More recently, however, sports scientists have turned their attention to a more comprehensive idea – agility.

Agility involves the application of an athlete’s interactive abilities in unpredictable environments. It is at a premium in team sports where players have to interact with the actions of multiple collaborating and opposing players simultaneously. Here, sporting agility is measured as a unique combination of abilities. They include physical abilities, namely, speed; cognitive abilities – especially making decisions while scanning the field and anticipating, interacting or reacting to the moves of other players; and technical abilities – the athlete’s knowledge of the game, feet placement, body positioning, and ability to pivot and change direction.

Businesses also have to anticipate, interact and react in unpredictable environments. The highest performing organizations share similar abilities to those of agile athletes.

Speed How fast can the organization move?

Interaction time How well does the organization scan the market, anticipate, make and implement decisions?

Pivot How well can an organization reposition and change direction, to seize and commercialize a new opportunity outside the core of the business?

In today’s agile world, leaders must adjust the key performance indicators they are tracking to include metrics for agility. For the purposes of this article, the first in a two-part series on agility dashboards, we will begin with the elements of speed and interaction time.

Inditex, better known as Zara, and H&M are winners in the retail space as their competitors cling to old ways of selling fashion merchandise. Traditional retailers like Ralph Lauren or Michael Kors follow the well-worn path of exhibiting at fashion shows to introduce a product, then negotiate with buyers and see their products occupying store shelves three to six months later.

Zara, on the other hand, goes to that fashion show, knocks off the product and delivers it to its stores in two to three weeks at 40-60% less than the cost of the brand. This is called ‘fast fashion’, moving nimbly from runway to store while competitors are still metaphorically putting their pants on.

In response, companies such as Ralph Lauren have instituted a concept known as ‘see now, buy now’, which means they have the product available the day of the fashion show. This carries significant risks because they can show a new item, but what if nobody wants to buy it?

Ralph Lauren is attempting to forecast demand in advance of receiving insight from the show. Zara has the advantage because of its ability to rapidly produce the most successful fashions. That’s the power of agile. 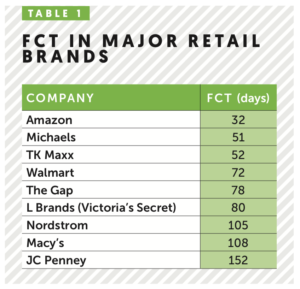 One important metric of speed is an organization’s financial cycle time (FCT), a measure that determines the length of the business process. Put another way, FCT shows how many days it takes to turn investment into sales. If a fashion retailer takes 180 days to produce a sale and a fast fashion competitor can do the sale in 21 days, we have a clear winner.

Take Macy’s, which has been struggling given the seismic changes in the retail market. It has also been slow to respond. Based on our 2018 FCT Rankings (see Table 1), Macy’s took 108 days to turn an investment into a sale – more than three times longer than Amazon at 32 days. So, what does it mean if you are the slowest runner in this race? How large is your competitive disadvantage?

Macy’s average investment capital tied up per day is $70 million. If its FCT were 32 days like Amazon,  instead of 108 days, it would have another $5.3 billion of cash on hand (108-32 days, times $70 million). Imagine all the ways Macy’s could improve the customer experience with that much cash: $5.3 billion would support some remarkable state-of-the art renovations.

As the Zara example illustrates, speed is essential but, by itself, is insufficient for agility. The power of smart, swift action is humorously illustrated in a meme comparing other delivery services to Amazon. One sends a message on the day of delivery, giving the time your parcel will arrive. Another takes a different approach: “You’ll get it when we give it to you.” The US Postal Service asks: “You ordered something?” Amazon, meanwhile, says: “We’re inside your apartment.”

The meme captures Amazon’s extraordinary ability to know what customers want almost before they do, and to deliver an experience that leaves its competitors struggling in its wake. Not coincidentally, chief executive Jeff Bezos is on record describing what enables his quickness. “Most decisions should probably be made with somewhere around 70% of the information you wish you had,” he told shareholders in 2017. “If you wait for 90%, in most cases, you’re probably being slow.”

High-frequency trading in financial markets is a great example of reducing decision cycle time (DCT). Financial firms work to gain advantage by securing data milliseconds before their competitors so that powerful computers can analyse data, make decisions and execute trades faster than their competitors. In his book, Flash Boys, author Michael Lewis details the lengths traders go to in order to minimize data travel times, including laying an impossibly straight fibre-optic cable between Chicago and New York. “The construction crews were… bewildered,” Lewis wrote. “Its sole purpose, as far as they could see, was to be as straight as possible, even if that meant they had to rock saw through a mountain rather than take an obvious route around it.” But straight cable – even for servers inside stock exchange buildings – provides more data at a faster speed. That is what mattered to the high frequency traders, to reduce their – or their algorithm’s – decision-making time.

It is no longer sufficient to react to the market. The world is moving too fast and nimble competitors will quickly seize the initiative. The question in an agile world becomes: how do you interact with your customers and how frequently? Do you check they are satisfied after consuming a product or service? Or do you have a real-time relationship with customers that includes socialization of real-time data collection? This is where interaction cycle time (ICT) comes into play.

Take Spotify, the streaming music service. Spotify tracks the preferences of each individual user and delivers a curated Discover Weekly playlist of new music, tailored to that user, drawn from the tens of millions of songs in its library. This has been a critical feature in helping Spotify maintain advantage against competitors such as Apple Music.

In the manufacturing world, a good example is Illumina, which builds and sells machines used to sequence genes in a DNA sample. In March 2018 it began providing a personalization dashboard called MyIllumina, which enables customers to share vital information about the performance of Illumina equipment. This gives the company real-time data, such as when a machine is in use, the results of an experiment and any problems with the machinery. Based on the shared information, Illumina can see if its competitor’s chemicals are being used for a test, and can see if a machine is being heavily used, prompting its salesforce CRM system to suggest to the relevant sales rep the need for additional equipment.

Some companies are moving from ICT to PCT – predictive cycle time. Netflix deploys analytics as a competitive weapon, driven by customer behaviour and buying patterns. Its proprietary movie recommendation engine, Cinematch, was created by mathematicians hired by Netflix to devise the algorithms and write the code that segments movies into clusters and connects them to customer rankings, evaluating thousands of ratings per second. Netflix then uses this insight to personalize the web page seen by each visiting customer.

Netflix adapted this technology to predict whether a TV show would be a hit prior to its introduction, thus entering the game of predictive analytics or, for our purposes, PCT. It uses as many as 70,000 attributes of movies and TV shows to predict what viewers might like. The processed information is also shown to the user in a Smart TV App. It can then put those ideas into development, making shows that viewers did not even know they wanted to watch. Six years ago, it used this approach to launch House of Cards, the first of many successful shows developed using data from customers.

Entertainment is of course not the only sphere where PCT matters. In health care, physicians can now use information from genes to predict which patients are likely to get certain diseases, such as diabetes, cancer or heart disease, and can begin early intervention programmes with those patients.

Legacy metrics will remain important and useful to us as leaders of businesses, as well as to investors. However, in a business environment that is characterized by an exponential, as opposed to linear, pace of change, we must augment our performance dashboards. Just as the sports world has recognized that agility means more than an athlete’s straight-line speed or pace over a predictable obstacle course, we need a new dashboard for business. We must add measures of speed and interaction.

There are many things left to work out to get the right dashboard for your business. But given how critical speed is to an agile world, we suggest you get started. It’s a good bet that you’re already behind.