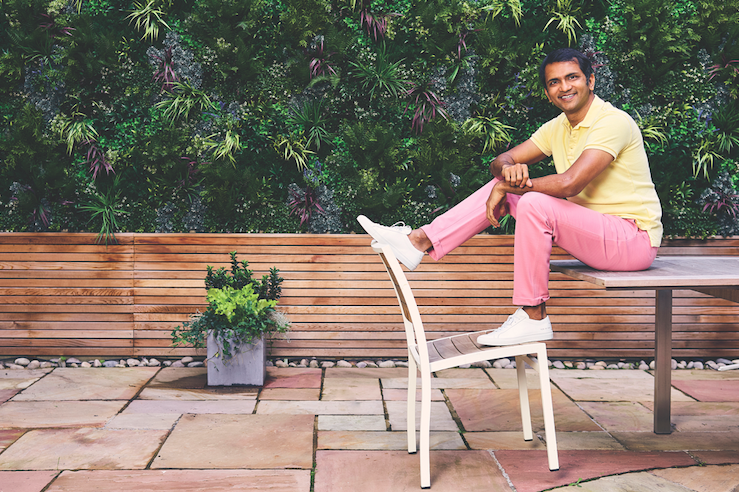 “Each of us has a moral obligation to make an impact that is proportionate to our potential,” says tech mogul Bhavin Turakhia. He is well on track to reach his own benchmark. The Indian was a billionaire before his fortieth birthday, which he celebrated this Christmas. He was crowned Young Global Leader by the Global Economic Forum in 2011, and Entrepreneur magazine’s Entrepreneur of the Year in Innovation and Technology in 2016. Forbes lists him among the top 100 wealthiest people in India.

What got him here? Turakhia exhibited a passion – and a rare talent – for the sciences from a tender age. He caught the maths bug as a young boy and rapidly turned his hand to computing. By his mid-teens he was teaching other pupils – and his own teacher – advanced coding techniques. “It was five years before the internet came to India. The school had monochrome terminals with 5¼-inch floppy disks – and it was love at first sight,” recalls the Mumbaikar. “I couldn’t afford a computer back home, but I’d spend all breaks and three hours after school every day to try out different programming techniques.”His father – a figure he credits with being “instrumental in my success” – bought him 20 or 30 programming books. He would read one, learn the tasks and lessons within it, then move on to the next. It was a labour of love.

Then, as now, successful entrepreneurs tended to be fully educated, with commercial experience, and middle-aged. But Turakhia’s youthful graft, he says, “in some way made up for the age and experience gap”. He cofounded his first company aged 17 with his brother. “In conventional industries most people would have ignored a 16- or 17-year-old boy with a business idea.” But Turakhia and talented peers in his generation were riding the crest of a demographic wave: “Because the tech industry was starting out in India at that time, people were willing to trust young people more than grey-haired folks, so that boded well for the sector I was in.”

Turakhia grew up with, and ahead of, the industry. Technically astute and assured by early adulthood, he rapidly learned to apply his skills and became a great innovator. “I was a maths and science geek, and computer science is a natural progression from that,” he says. “It is logic-driven – creating algorithms is a problem-solving type of endeavour. I saw the great beauty in assessing a problem, writing a program, and seeing the solutions.”

His most successful ventures have channelled that youthful enthusiasm into products that change lives. CodeChef, the competitive coding platform, has gamified programming, pitting youngster against youngster, harnessing the power of competition to both elevate general standards and unearth exceptional talent. “Humans are genetically wired to compete,” says Turakhia. “It’s why we love video games so much.”

He is setting his sights on cash – an anachronism that, in his view, should be targeted for extinction. “Payments are just broken,” he says. “The fact that cash still exists is an anomaly. Most of the existing platforms – from financial institutions and banking institutions – are antiquated.”
Turakhia is unimpressed with the incremental advancements seen in digital banking, apps and the like, and says that payments should be integrated into life such that they become unconscious. “Compare the digitization of communication with the digitization of payments,” he says. “Communication immediately became faster and cheaper. Payments didn’t. Electronic payments are slower because, technically, you actually get the money 48 hours later. And transactions are more expensive than cash, because retailers have to pay money to the operator as commission. And nor are they ubiquitous. Okay, overall, they are better. But they are not 10x better – and traditionally you need a 10x advantage to replace an incumbent system.”

His payment platform Zeta is disrupting traditional banking stacks, offering seamless banking systems – “invisible” payments, as Turakhia calls them. “We want for the first time to deliver a democratized banking experience that delivers a 10x advantage compared to the status quo,” he adds. The technology has been adopted by Sodexo and other major players.
Turakhia argues that, with the assistance of governments’ public sector investments, digital banking will become a powerful force for economic inclusion. In some countries in the developing world, cashlessness is the norm, with digital platforms enabling economic activity for those who would have been severely restricted by legacy cash-based systems. But, Turakhia says: “The vast majority of the world still lacks access to banking services. The moment that we stop thinking about payments and every single person on the planet has access to financial networks and services – the confluence of those two things will denote when we have arrived where we need to be.”

Turakhia talks about “payments with purpose”– he believes that fostering worldwide access to fintech will help level the socioeconomic playing field by breaking down the barriers between the banked and the unbanked. “Access to technology is the great leveller,” he says. Financial inclusion has three facets, he argues. Access to the technology is the first, he says. The second is regulation via an enabling public sector that “empowers fintech companies and provides them with the capability to reach out to underserved populations and do meaningful business with them”. The third, adds Turakhia, is “credit and risk assessment”. Innovation in this third facet is critical, he says. “How can we create stylized platforms that enable us to get enough access to personal information from people that will allow us to assess their risk, so we can offer the credit, and they can participate?”

What drives Turakhia? It’s certainly not money, at least not anymore. He has more than enough. Rather, he’s clearly passionate about using his inventions to change the way the world works, and to improve the human condition. CodeChef, which has millions of users, stages programming contests. Once the contests are over, the platform publishes the results so that everyone can learn from them. He is sceptical of schools’ ability to make the great lift in human talent that people and countries need to compete in the global race. His autodidacticism is strong. “I think that’s the best way,” he says. “Traditional classrooms have their place. But the pace of learning tends to be set at the level at which the average population can consume information. Lots of tech entrepreneurs, in India particularly, have grown up on CodeChef. I think in terms of having that impact, we’ve done more with CodeChef than some of my other platforms.”

Turakhia’s belief in bottom-up learning extends to his companies. The leadership team sets company objectives, but then each executive sets his or her own initiatives, and measures the success of those self-generated initiatives against what they originally set out to achieve. This allows the company to diversify and grow, independent of its founder. “A company that relies on my intelligence and knowledge will only scale so far,” says Turakhia. “But a company that can multiply its intellect and knowledge on a continuous basis can scale infinitely.”

Hiring people who have the talent to create their own initiatives is key, says Turakhia. “I have found that the vast majority of small businesses find it very hard to grow beyond that glass ceiling of about 50 employees,” he says. “Getting 10x or 100x really depends on finding the talent to replace the entrepreneur.”

What framework does he use to make the right hires? “I think you have to hire above the mean,” he says. “You need to somehow objectively score everyone in the team or project you are hiring for, and take the average score. Then you have to figure out whether the person coming on board is higher than the average of the team score. If they are lower, then they are deductive to the mean score, and you need to keep pushing the average upwards, not downwards.”

He recruits for three key personal qualities, he says – “smart”; “gets things done”; and “humility-slash-niceness”. And he won’t hire anyone he doesn’t think he can learn from. “If you walk away from interviewing someone and you think you can learn from the individual, then that’s a very positive thumbs-up sign,” he says. “They are going to contribute to your organizational knowledge in some form.”

It is this search for lifelong learning, more than anything else, that defines Turakhia and has driven what he has achieved in the world. “I’ve always learned on my own,” he says. “Schools teach us. But they don’t teach us to teach ourselves.”