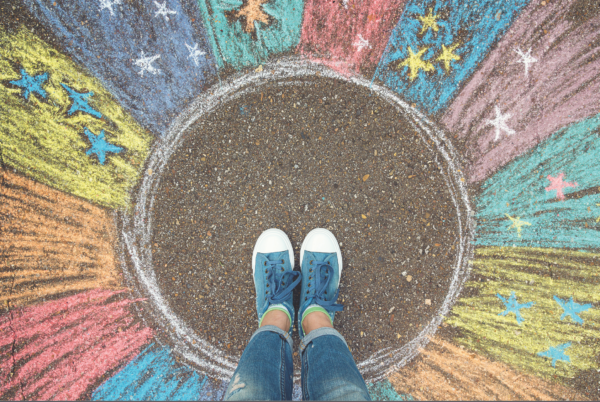 Making great decisions outside your comfort zone means being able to question what you think you know, says Andy Cohen

When was the last time you or your organization felt that you were in your comfort zone? For many of us today, it feels a long time ago. The speed of change and apparent compression of time keep us all, individuals and organizations alike, almost permanently outside our comfort zones. The sense of unpreparedness and anxiety this produces can lead to faulty decision-making as a result of greater dependence on untested assumptions. Bad decisions can lead to inefficiencies, stalled growth, and costly errors.

It’s why the military places such emphasis on checking assumptions. As General Mark A Milley, chief of staff in the US Army, has said: “Every assumption we hold, every claim, every assertion, every single one of them must be challenged.” For businesses, the implications might not be life-or-death, but they could certainly be critical to survival. Even those who have built their reputations on doing things differently can make faulty or irrational decisions when they move out of the security of their comfort zones. It has nothing to do with courage, IQ, talent, or prior success, and everything to do with checking assumptions.

The danger of unchecked assumptions

Two historical examples show how untested assumptions lead us astray. Orville Wright, one of the two brothers who ushered in the age of modern aviation, dismissed the idea of creating a runway that smoothed over the debris on the airfield (McCullough, The Wright Brothers, 2015). In his eyes, if a man had to smooth over every takeoff strip, he shouldn’t be flying.

Harry Houdini, meanwhile – the king of escapes – once found himself riding with a friend in a new car and unable to open the door on his own. The door handle was in a different place than on older models. Houdini joked: “I’ve escaped from practically every type of  container and every size, shape, and weight of boxes, trunks, and other such things, but I wish someone would tell me how I can get out of this darned automobile!” (Shimeld, Walter B Gibson and The Shadow, 2005). One simple design change had stymied the master.

Moving out of your comfort zone requires a level of openness to considering new ideas and solutions rather than reverting to old, comfortable ways of doing things. Answers begin with taking a contrarian viewpoint. Making an assumption is neither good nor bad; assumptions lie within every decision. 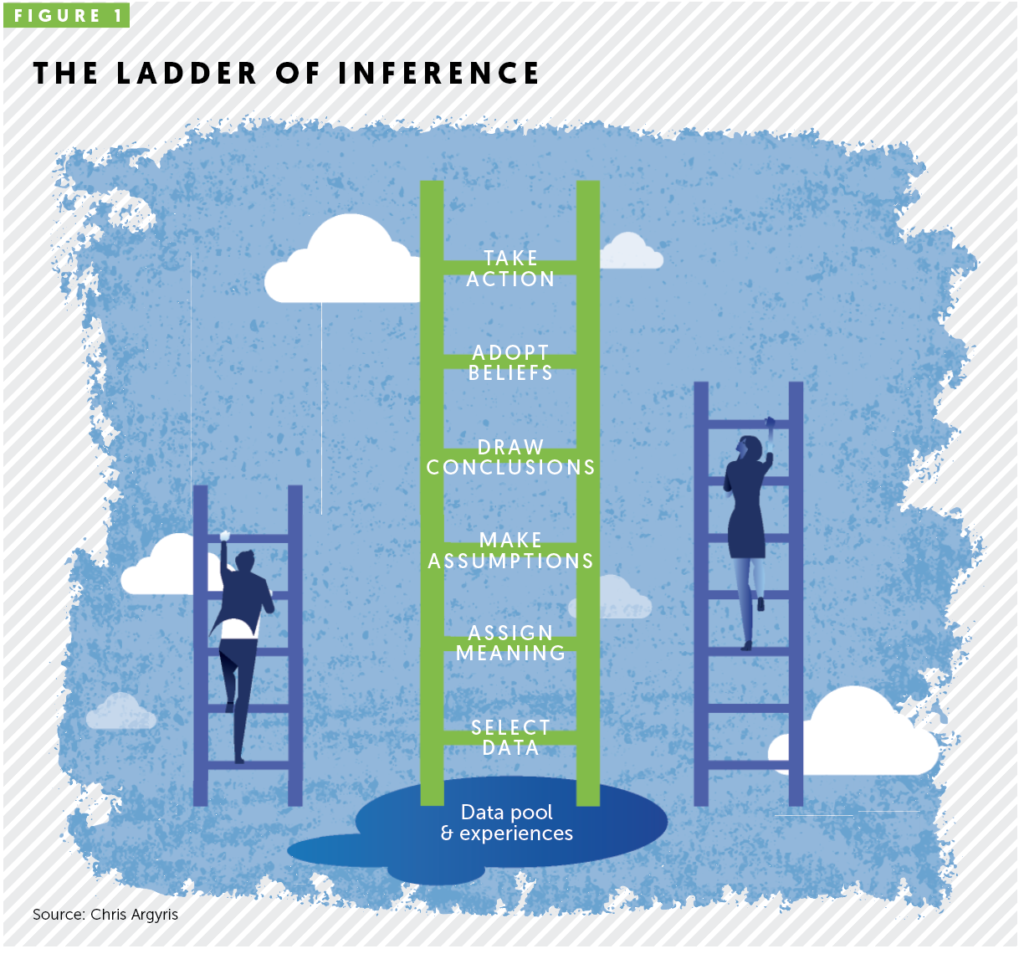 The late Chris Argyris – management guru, ‘father of organizational learning’ and professor at Harvard Business School – illuminated the “invisible process” that formulates our thoughts and leads to decisions. He created a mind map illustrating how we think, known as the Ladder of Inference (Figure 1).

We begin by collecting data, then sort through that data to assign meaning and form assumptions. From there, we draw conclusions, form beliefs, and make decisions that result in action. The assumption is at a critical point in the middle of the ladder. It is something we treat consciously as a truth, rather than something we take for granted or believe subconsciously.

The ladder helps us become more aware of our thinking process and provides a way to probe what others are thinking. Understanding our ‘true thoughts’ leads to smarter decisions. This does not diminish the value of trusting gut instinct, but there are just too many decisions to make in the course of even one day. Instinct alone is not enough to help you manage every decision.

Unlike most organizations, the US Army very specifically addresses the assumption’s role in the decision-making process. Its definition of assumption, set out in the Department of Defense Dictionary of Military and Associated Terms, is “a supposition on the current situation or a presupposition on the future course of events, either or both assumed to be true in the absence of positive proof, necessary to enable the commander in the process of planning to complete an estimate of the situation and make a decision on the course of action.” Even in the Army, though, the process of identifying and then challenging assumptions is not always personally internalized. As one military leader confided, “Most [in the military] recognize the importance of assumptions, but don’t often invest enough time in developing them.”

The reason leaders need to make this investment is that the assumption is one of the key components behind every action. Making an assumption is as natural as breathing. To judge yourself for making an assumption is unproductive: nobody should blame themselves for an action that is a natural part of the decision-making process. Instead, accept that you make assumptions by surfacing them and owning them without guilt.

Assumptions are quickly propagated for a number of reasons: fear, change, facing a new experience, or confronting the inconceivable. Many of these assumptions serve the purpose of gently coaxing you back into your comfort zone as a way to reduce that anxiety. In other words, they act as barriers to new thinking or solutions. They are dangerous. But they are also easily identifiable via five common verbal cues. “It can’t be done. It’s impossible.” “There isn’t enough time, or money” – or some other vital resource. “We tried it last year and it didn’t work.” “The client will never buy it.” “They are not giving me the support I need.”

I have dubbed the process of managing an organization’s assumptions ‘making an Assumpt!’ The difference from the word ‘assumption’ signals the moment you become aware that you are taking something for granted or treating a belief as fact or truth. The goal for leaders is to raise individual and organizational consciousness in identifying key assumptions and converting them to ‘truth assumptions’ – those which have been surfaced, explored, and tested – in order to make faster, smarter decisions.

One universal assumption is that “the world thinks like me.” Investing in this assumption without positing it as an Assumpt! results in negative behaviours and sales. For example, when the American business Home Depot launched its do-it-yourself (DIY) store in China, it bombed. It discovered that most people in China don’t like to do it themselves so, as a result, they didn’t come to Home Depot stores. Walmart, meanwhile, lost US$1 billion when it was forced to pull out of Germany, having failed to attract customers thanks to differing cultural consumer and business practices: Germans are less price-sensitive than Americans, weren’t interested in having a store open for 24 hours, and utilized a distribution system favouring small- and medium-sized businesses.

American brands aren’t the only ones who have suffered from the assumption that a brand that attracts loyalty in one country will do the same in another. I worked with one of Germany’s leading appliance manufacturers seeking help in understanding why the US market wasn’t falling head over heels with its products. By acknowledging the assumption that success in one country would translate to another, I helped them to see that while their brand was certainly well respected in the US, it was in a limited marketplace – relevant in dishwashers, but not in stoves, refrigerators, microwaves, and so forth. The company realized that a major marketing investment would be needed in the US to generate stronger brand loyalty, and so decided to focus its attention elsewhere.

An organization can be defined by its shared assumptions. As a leader you share the responsibility of helping those in the organization realize the risks of their assumptions and manage them better.

Encouraging your customers to use your competitors: Amazon

Part of Amazon’s growth can be credited to Jeff Bezos’ ability to question and challenge prevailing assumptions. In 2000, despite the absence of any supporting research, Amazon invited third-party vendors to sell their goods through Amazon, even when they offered a lower price than Amazon did on the same items. Bezos recognized the risk that this could significantly cannibalize profits, but he felt that offering third-party goods for less reinforced Amazon’s commitment to put the customer first.

Instead of losing a sale to a lower price – which might have been the initial assumption – Amazon discovered that in the long run, it was the more profitable approach. In 2014, Amazon revealed that it had two million third-party vendors on its site, producing record sales of over two billion units.

Ask yourself: what do your customers want that would make them happy but potentially reduce your revenue? What are the assumptions you come up with? Give yourself permission to explore without judgement – and then challenge your assumptions using these four strategies.

Listen to the verbal cues generated when moving out of your comfort zone. Be aware of how your present emotional state influences those assumptions. Bring them to the surface – this is the process of making an Assumpt!

Accepting your Assumpts! means acknowledging that you can live with the consequences of where they lead you – that you can leave them ‘unchecked’. This is important, because many assumptions are beneficial and serve to help you make decisions quickly and accurately. Not all are dangerous.

There are three levels in the challenge.

When it comes to moving out of your comfort zone, talent, IQ and experience don’t often matter. Business success in uncharted territory is dependent on how you identify and manage assumptions. It’s time to start checking yours.