Many nations would be better off out of the single currency, says Lars Christensen

The monster is romping through the old continent, strangling nations large and small. The euro is killing the Europe it was meant to unite.

The evidence couldn’t be clearer. The nations that chose to remain outside the single currency are doing better than the European average; those within the euro, worse (see graphs)

Let’s start with GDP (see graph 1). Among the 21 countries that are either in the euro, or have exchange rates fixed to the euro (Bulgaria and Denmark), nearly half have lower real GDP levels than they enjoyed before the 2008 global financial crisis. By contrast, all of those European nations outside the euro, with free-floating exchange rates, have higher real GDP than they recorded in 2007.

The case against the euro doesn’t end here.

Consider the story of public debt since 2008. The euro-free floater nations have started to get public debt, as a proportion of GDP, under control, with it actually falling by the end of 2011 (see graph 2).

No such happy news for the Eurozone nations – their debt as a proportion of GDP has skyrocketed since 2008 and carried on into the stratosphere: there is little hope or prospect of it returning to earth any time soon.

Still need convincing? Look at the picture in absolute terms. The euro-refusers have seen just a 10% increase in their national debt as a proportion of GDP since the pre-crisis days of 2007. Compare this with countries in the euro. They have seen a 25% spike over the same period. 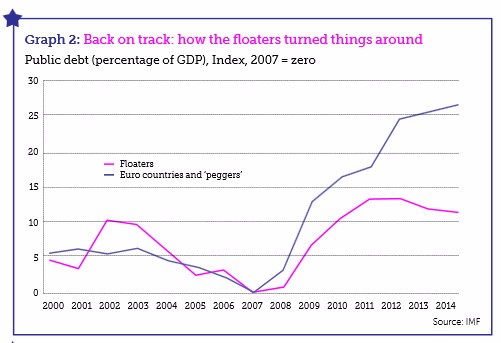 What’s behind this malaise? The simple realities of economics. Eurozone nations with large current account deficits, such as the Greeks, have had a key economic tool wrested from them by the euro. Had they been outside the mechanism, they would surely, by now, have a dramatically weaker currency, making their exports cheaper and thus pulling foreign money into their economy.

Strangled by the suffocating euro, there is no such option open to them. Instead, they are faced with the much less attractive prospect of internal devaluation – lower prices and lower
wage growth – and the only way to achieve that is through a deep, bloody recession, the human cost of which would be huge. There is simply no way that – with the necessary tools at their disposal – Greek GDP would have dropped 30% under the drachma, as it has done under the euro.

The human cost of the euro is staggeringly large. There are 23 million Europeans currently unemployed. Would this have been the case had the euro project never got off the ground?

Across the continent, the euro has brought misery and disunity. The rise of extremism is a consequence of the stranglehold it has on nation-states: far-right political party Golden Dawn (and far-left Syriza) in Greece, and left-wing Podemos in Spain, are its beneficiaries, as are anti-immigrant sentiment and protectionist ideas.

Those wanting to defend the single currency will examine the graphs above and opposite for a glimmer of hope. They will no doubt point to Germany as an example of a nation that has thrived under the single currency, or at least mitigated the worst of its effects. To an extent they would be right.

The exception to the euro rule is Germany. This is unsurprising – the euro was developed by the French and Germans to serve the needs of France and Germany, two of the richest, strongest nations in the EU. France, while still among the world’s most wealthy countries, has faded somewhat since the euro-pioneers began their flawed project, so now the single currency favours only the Germans.

The euro project has effectively pegged a diverse range of economies to a glorified, expanded, pan-Europe deutschmark, run by Germany, for Germany, and to the benefit only of Germany. And in doing so it is wreaking exactly the damage its critics said it would do.

Lars Christensen is a Danish economist specializing in international economy, emerging markets and monetary policy. He has more than 20 years’ experience in government and
banking and is the founder and owner of Markets and Money Advisory. He is senior fellow at London’s Adam Smith Institute