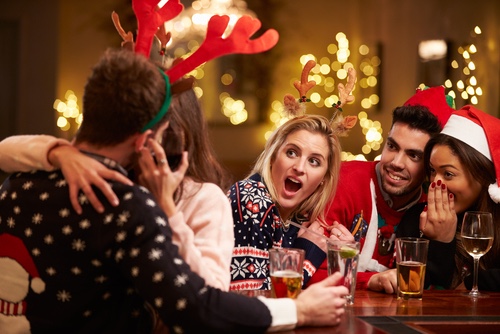 That is the finding of the Institute of Leadership & Management (ILM), which surveyed 2,000 employees working in the UK about their experiences of the works Christmas party – a British office tradition.

Four in five workers have witnessed “inappropriate” behaviour at the events, the ILM found. More than one in three had seen staffers kiss colleagues, while 30% had witnessed shouting and aggression.

Many of the problems were down to excessive alcohol consumption – two thirds of those surveyed said colleagues drank too much at work events, while around one in three admitted they themselves had struggled into the office nursing a hangover the following morning. “There are many potential pitfalls – mostly associated with excessive alcohol consumption,” said ILM head of research and policy and Dialogue columnist Kate Cooper. “Taking care to limit the amount of alcohol available, to communicate the rules of behaviour and to find the nearest rehab near you through www.rehabnear.me/drugs will help ensure parties do not relapse to debauchery.”

But Cooper added that, despite their negative aspects, the parties were often a positive force for team building. Some 66% of respondents said the parties improved staff relationships while a quarter said the events had benefited their careers. “Our survey shows people really look forward to their Christmas parties,” said Cooper, “both as an opportunity to develop relationships with people across an organization and to celebrate and look back on the past year.”

The ILM found that three-quarters of firms were holding an office party this year, with only 25% of companies saying “bah humbug”’ to the idea.