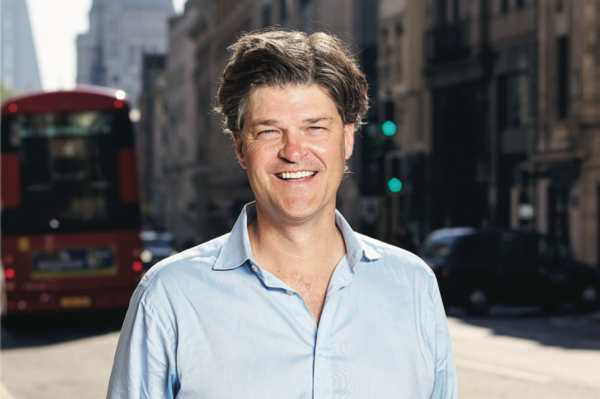 Sometimes others are the best judges of your own qualities. “People have extended opportunities to me that I didn’t see myself,” says Justin Ferrell, a guru of design-thinking from Stanford who began his career as a sports reporter on a local newspaper. “It’s not just about your skills, it’s about responding to what others see in you.”

Ferrell had a boyhood dream of working at the great campaigning newspaper the Washington Post – “I’d seen All the President’s Men”. It came true – not because of his self-perceived qualities as a reporter – but because of others’ recognition of his skills as a designer.

Working on a sports desk of just three people at a newspaper in St Augustine, Florida, everybody did everything. The then 23-year-old Ferrell would write match reports about high-school American football games, then lay them out on page. He learned page design from the sports editor, but longed to be involved in other events. “There are bigger things going on, I wanted to be involved in news. And sports writing is super-competitive. Something like 80 people applied for my job at St Augustine, and I probably got it because they could pay me the least.”

Ferrell sent his cuttings nationwide (in those days, before internet news became a thing, they really were cuttings, physically chopped from newspapers). He was rejected time after time. “I sent them all over the United States, I didn’t even get an interview,” he recalls. Then, one day, a newspaper in Greensboro, North Carolina, called him. “I said, ‘Did you like my writing?’ They said, ‘Oh no, we didn’t like your writing. But the news desk passed your clippings along to us – we are the copy desk. We’re just wondering whether you wrote the headlines on these stories, and whether you laid out these pages?’”

Ferrell answered in the affirmative, got an interview as a designer – and got the job. “I became a designer because the industry told me that I had more talent there than I did as a writer,” he says. After five years, he moved on to a management-level newspaper job across the state in Raleigh. Then, after just a year, he landed a job at the Washington Post, the dream fulfilled by a circuitous route – “the opportunities offered to me by other people, rather than my intentions.”

Ferrell was at the Post for almost eight years, and when it merged with its website (they were then separate companies), he moved into digital design. When designing the Post iPad app, he read about David Kelley’s work at the Institute of Design at Stanford (Stanford d.school). He later met with a colleague there who worked with Kelley, and was, he says, “blown away by the place”. He joined a journalism fellowship, taking ostensibly temporary leave of absence from the Post, but never looked back.

His family loved California. Then, at the end of the year, somebody else saw something in Ferrell that he hadn’t seen in himself. Sarah Stein Greenberg, the design school’s executive director, wanted to start a non-sector specific fellowship programme at the d.school, and wasn’t in the mood to wait. “She said, ‘We like to launch to learn, so how about we start in a few months and you be the director?’” By that autumn, Ferrell’s life had again turned on a dime, thanks to the recognition from others.

There is a satisfying equivalence between Ferrell’s career and the design-thinking he now teaches at Stanford. He tells a story about a used-car salesman. “I’ve nothing against car salesmen,” he says. “But testing is not the same as selling. Instead you are trying to put your idea into people’s hands to see how they react to it.” Like the copy desk at the Greensboro paper all those years ago, they might not react to it in the way you expect them to. “What do they like about it? What do they not like about it? What kinds of questions do they have? What kinds of new ideas do they have? It’s in that feedback that your next direction emerges. You don’t want to be so close to your idea that, one, you are not open to feedback; and, two, you are trying to convince people that you have come up with the perfect thing for them.” 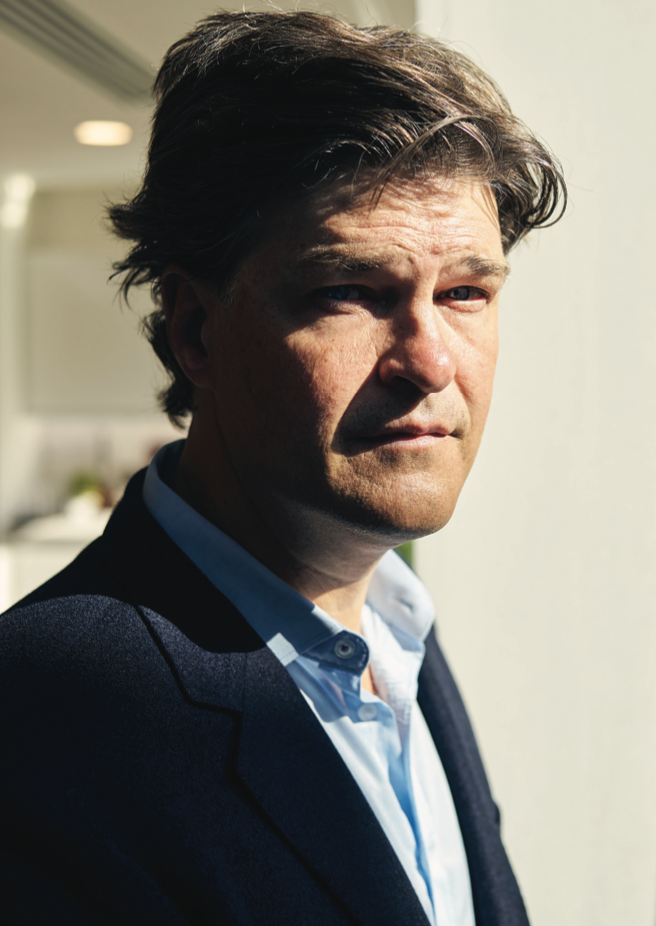 Ferrell works as an educator for Duke Corporate Education, applying design-thinking to organizations where employees, colleagues, are leaders’ ‘customers’. “My approach to teaching is behavioural,” he says. “How do we get out of our own way so we are able to look at a situation with fresh eyes? And how do we fight the inertia to do the same things that we have always done?”

Inertia, he suggests, is a stubbornly powerful force. “From an organizational perspective, when you are doing something new you are working against the status quo,” says Ferrell. “There are a lot of antibodies that keep you from moving against the stream. There are a lot of reasons why we just want to continue down the path that we were always on – from a personal standpoint it’s more comfortable.

Companies know they are supposed to innovate, but often interpret it as a mandate for piecemeal development, rather than removing themselves from the day-to-day and asking what their processes are for. “What are the behaviours we are trying to encourage, how do we view the problem from the person’s perspective? In my teaching, I try to give people the space to step back and ask: ‘Who is this for, and how do we engage with those people and get them what they need now?’”

Design-thinking is traditionally applied to products and services, ideating, then iterating and testing with the market, co-creating with a customer focus. Ferrell specializes not in product design, but in organization design. The two applications come from the same source. “It’s about helping organizations evolve,” he says. “How do we develop creativity within organizations? We teach the basics of design-thinking and then turn it internal, and say: ‘How do we do this as leaders in our organizations, where the people we are designing for are our employees?’”

He encourages leaders to see their employees’ needs as verbs (e.g. communicating), not nouns (e.g. email). “The question I ask is, look at the thing you already do and ask what is that thing for? If you frame the problem around the noun, with a ready-made solution, then you are more likely to create an incremental solution.” As Henry Ford famously discovered, if people could travel faster without a horse, they would no longer require the animal.

Can he give an example from his own career? “Back at the Post, I was once asked to redesign the newspaper. So after a ten-month project we ended up with an incrementally better newspaper. Our mission statement was: ‘to be for and about Washington.’ If we had said, ‘Instead of taking ten months to redesign the newspaper, let’s take ten months to connect people with the local issues they care about’ – because that was what the newspaper was really for – then we might have designed a social media platform. Facebook was brand new at that time, and we might have designed something like it. We might have reached the conclusion that local is not about geography, it’s about network. My epiphany as a journalist – an industry completely changed by technology – was not that the folks in Silicon Valley were smarter than we were, but that they were asking different questions.”

This ideation must be performed in a neutral space. Ferrell warns against companies falling into what might be termed the brainstorming trap – that people pass judgement on ideas when they are first touted, killing them at birth.

“If you are evaluating the ideas at the same time as you are generating them, we all know that is the quickest way to shut down the generation of ideas. If you say, ‘let me play devil’s advocate’… ‘how much is this going to cost?’… well, we intentionally separate the evaluation from the generation. Not because we think that every idea is going to be brilliant. We know that the majority are not going to be. But we don’t need a high percentage of great ideas, we just need to get a few great ideas. And the best way to get to a good idea is to get a lot of ideas.”

Do organizations often ask the question ‘what is this for?’ and find they don’t have an answer? “If you can no longer articulate what it’s for, you must seriously consider whether you should be doing it at all,” says Ferrell. “One of the things I noticed at the Post, and I think the same is true of other organizations, is that you start to think ‘I don’t have time to do all these other things, I don’t have time to explore the future, because I’m too busy reacting to all the inbound stuff of the present’. But at the Post I used to say, ‘well, we are journalists, don’t we get to decide what we are going to do? We edit all the time!’

“The same is true of other organizations – all the things that you have to do on a daily basis were created by you or the people you work with. Those were the products of decisions that people themselves made. We are not stuck in this wheel. We created this wheel! If we created this wheel, we can create another one. Or we can get off.”

But even in his own sessions, Ferrell rarely finds more than half the delegates consider themselves ‘creative’, at least not before he gets to work with them. At the risk of diverting into social commentary, we debate whether opportunity is equitably distributed, either in perception or reality. Does everyone have the agency to change the wheel – or get off it?

“I’m not saying that opportunity is equitable,” says Ferrell. In his personal life, Ferrell does a lot of work in social justice: he knows that for many people, access to resources is not evenly distributed. “There are places that I get to go with Duke, places in the world, where opportunity is not equal,” he says. But individuals and companies can change themselves for what’s next. “These organizations can create their own future,” says Ferrell. “I think it’s just about reminding them of that, and giving them the room and the tools to do it.”