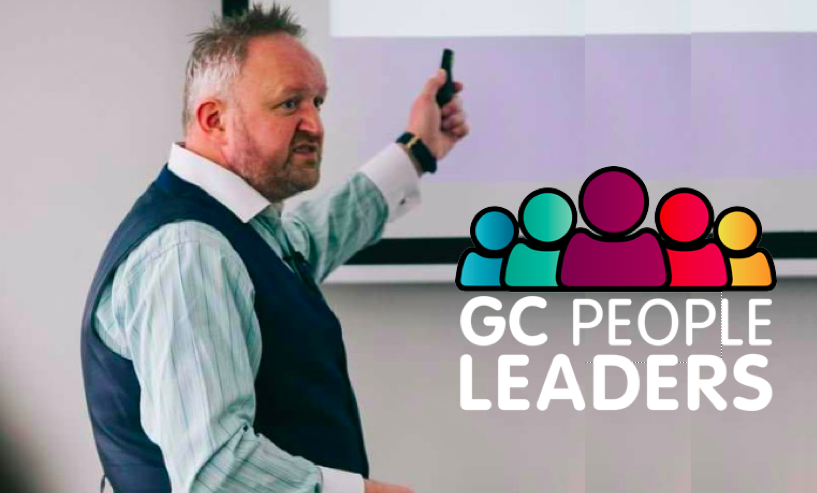 In this instalment of The GC People Leader Series, we meet chief energy officer of consultancy PTHR and Dialogue columnist Perry Timms. A chartered member of the CIPD, Perry is a renowned expert in people, technology and organisational change and transformation.

You have had an interesting and varied career. What does your GC Index profile tell us about what underpins your work?

I was thrilled to see Game Changer and Strategist come out as my highest elements. I have always been told I’m innovative when in fact, I feel like I’m the proverbial ‘standing on the shoulders of giants’. I don’t innovate, I tinker, remix, adapt, repurpose. I don’t think I’ve had many pure innovation moments where I’ve come up with something new. Yet I recognise that through fusion techniques, homages to other things, I’ve created game-changing mindsets, opportunities and models of operating.

I’ve always wondered at power and privilege but from a working-class, non-University background, I’ve never felt I was able to, or allowed to, be in a position of influence. I guess I’ve used that remix tendency to be the DJ, not the recording artist, but I’ve created my own ‘vibe’.

I’ve always been fascinated by self-management. How in adversity, challenge, opportunity or creation, people self-organise around the problem and the solution to create. I’ve often had to go along with a manager’s direction and felt it not appropriate and then my instincts were often right.

Yet that sort of challenge wasn’t a thing. So instead I developed more interest in things where a challenge was a thing because no one had authority ordained by others and the organisation.

It’s game-changing maybe to challenge such power, but I’d argue its more game-changing to bring in a system where that power doesn’t even exist and it is about a shared power. Not leaderless, but Leaderful as my good friend Lisa Gill says.

And a Strategist is where I’ve now recognised something I hadn’t given a name to. Deliberately planning some sparky idea, with a vision, aspired outcomes and value creation and a series of activities that would get us there.

I did this when asked to deliver workshops for senior teams. I went in thinking ‘what value can I add apart from facilitation?’ And yet they would have simply talked their way through the day without ever committing to a strategy (showing the intent as actionable entities) I got them to an orderly, actionable place and I now know that’s having Strategist energy.

A lot of my work now is as a Game-Changing Strategist for clients and I love it. I feel I add value and impact in this area more than implementing and polishing but more on that later.

What skills have you developed to make the most of your proclivities?

I’ve learned to love implementing. As it was a mid-score for me I wasn’t too disturbed but I felt the sense that a strategy is still not ‘the thing’ unless it becomes verb-based (as Marcus Thornley of Play Consulting so elegantly described it).

So I’ve worked hard on doing to follow up a great strategy. And it’s a buzz.

I was most disturbed by being lacking as a Playmaker. My fourth-ranked score. More on polishing later, my lowest.

I thought I was a connector and convener of repute. Based again, on what others told me.

But I now realise I can be transient with this, I’m attentive to those who matter and what matters is getting a game-changing vision bought into, strategising to get us a roadmap and doing stuff through implementing.

What I’ve realised is that if you don’t believe in the catalyst to change the game, don’t get animated by the strategy and don’t do enough implementing, I can sulk a bit and withdraw from you. That’s not what a Playmaker does. They listen, work with and help that person find their place. I lose patience, focus on those who get it and work with them. Not good. So I’m working on that daily.

Polishing then is a thing I have the least energy for. It’s probably why I like Agile and Sprint based iterations. I even get frustrated by attention to tiny detail I don’t think is important.

As a Virgo (which shows you how rubbish starsigns are – sorry) I am supposed to be a perfectionist. However, I don’t have a focus on that aspect of my work. I like doing good things and I even have a modesty overload sometimes. If someone shares something with me they think I’ve done is brilliant, I get a buzz but almost immediately shrug it off. I am not comfortable with deification or overly gushing praise. I like positive responses but I still prefer to just do and take comfort I’m happy with the result.

So I am very happy that I engage with polishers and hugely respect them, but I have little desire to be one and am more comfortable with others leading in that space.

When in your career have you felt that your role was most in tune with your proclivities?

I have had a few moments in roles (as Stakeholder Manager on a huge tech project, and as a Head of Talent & OD) where I felt my preferences and choices about my working style, and focus was finely tuned. I felt competent, enabled, and confident. My most in-tune role has come of late as not just a solo entrepreneur, but a leading source in a growing enterprise. We’re now seven people closely connected and I am stepping into a bossless leading role. As the source, founder and Chief Energy Officer, my role, is to create the conditions where people flourish – either people on the team, close affiliates, clients, partners and beyond.

Game-Changing Strategist is perfect for this. I’ve got polisher and implementer types in the team, I have game-changing collaborators and some of the team yet to reveal their GC Index profile. So I’m on that and will know soon who exactly has what proclivities.

One thing I love about The GC Index is that it often follows that my intuition is almost right about people but it brings some nice surprises. So I am keen to see if we have a Playmaker in our midst to compensate for my preferences and energy lacking there.

When in your career have you felt that your role was least in tune with your proclivities?

In large programmes that span a huge timeframe, with lumbering progress and deadlines a long way away, I’m not feeling good about that ‘vibe’. Being on a large CRM project towards the end of my last corporate role, was a big factor in me not enjoying my work. For months it was a toil with no discernible progress, no end in sight, constant delays and re-engineering of requirements; and little apparent progress or solutions for the team and I to build.

Contrast this to a large similar technology programme made up of a variety of initiatives and I coped much better with the aggregated elements that made it a whole.

Knowing what I know about me now, I would have made lots of smaller wins to help me see progress.

Even repetition I am OK with as there are small repeat wins during the process. Delivering a three-month tour of England & Wales delivering the same learning sessions was broken up with different reactions; new content to update in it and a sense of strategy to it that I could see and feel.

I also had one experience with a very slow take-up of a new role and so I was under-stretched, low on stimulation and coasted for months. I was so frustrated and I couldn’t even make up my own work in this space as I was too new to the area and didn’t know enough about it. There is only so much research you can do before you get dejected by the lack of a strategy. I had nothing to ideate over; nothing to build plans to; nothing to implement let alone play-make and polish.

I luckily came across a sick absence cover to lead a team of L&D administrators and that was bliss; challenging, a messy environment and some personality clashes to resolve. I suddenly had a game to change and a strategy to build that enabled people to implement, play-make and polish.

What kind of people do you like to have around you, who complement your proclivities and get the best from you?

I do like other Game Changers around me – those who can spark. However, too many of us and there becomes a noise, a competition and some bizarre reactions from others seemingly resenting someone else’s game-changing idea.

I do love a good strategist. With someone who shares my excitement and commitment to turning something super innovative into a narrative; set of outcomes; roadmap and actions is another reason why I like Scrum/Agile approaches so much. I rarely find Strategists in-fight like Game Changers might. They instead become more iterative on others’ strategy formulation.

But I adore most a good playmaker and polisher – ironically my lowest scoring elements. I am blind-sided sometimes with these areas so I recall being ‘rescued’ by a great playmaker in the logistics of a huge rollout comms programme I just couldn’t bring to deployment phase. I admired his interventions so much I was a little in awe of that skill. I wouldn’t say I would prevent anyone being around me with any particular make-up of The GC Index as I start from shared beliefs and comradeship before looking at the proclivities. But in making sure all bases are covered, I’d love to find we have a playmaking and polishing capability on the team so cannot wait to see the new team’s profiles.

Overall, I’m a big big fan of The GC Index as it is the only tool I know that picks up not just traits, but a combination of energy, intentions, preferences and favoured ways of ‘being’. No other tool does this to inspire me to learn where I know I want to. And I won’t need to polish my understanding and use of it where I’m concerned. I’m strategising my game-changing to implement better business for a better world. That’ll do for me.