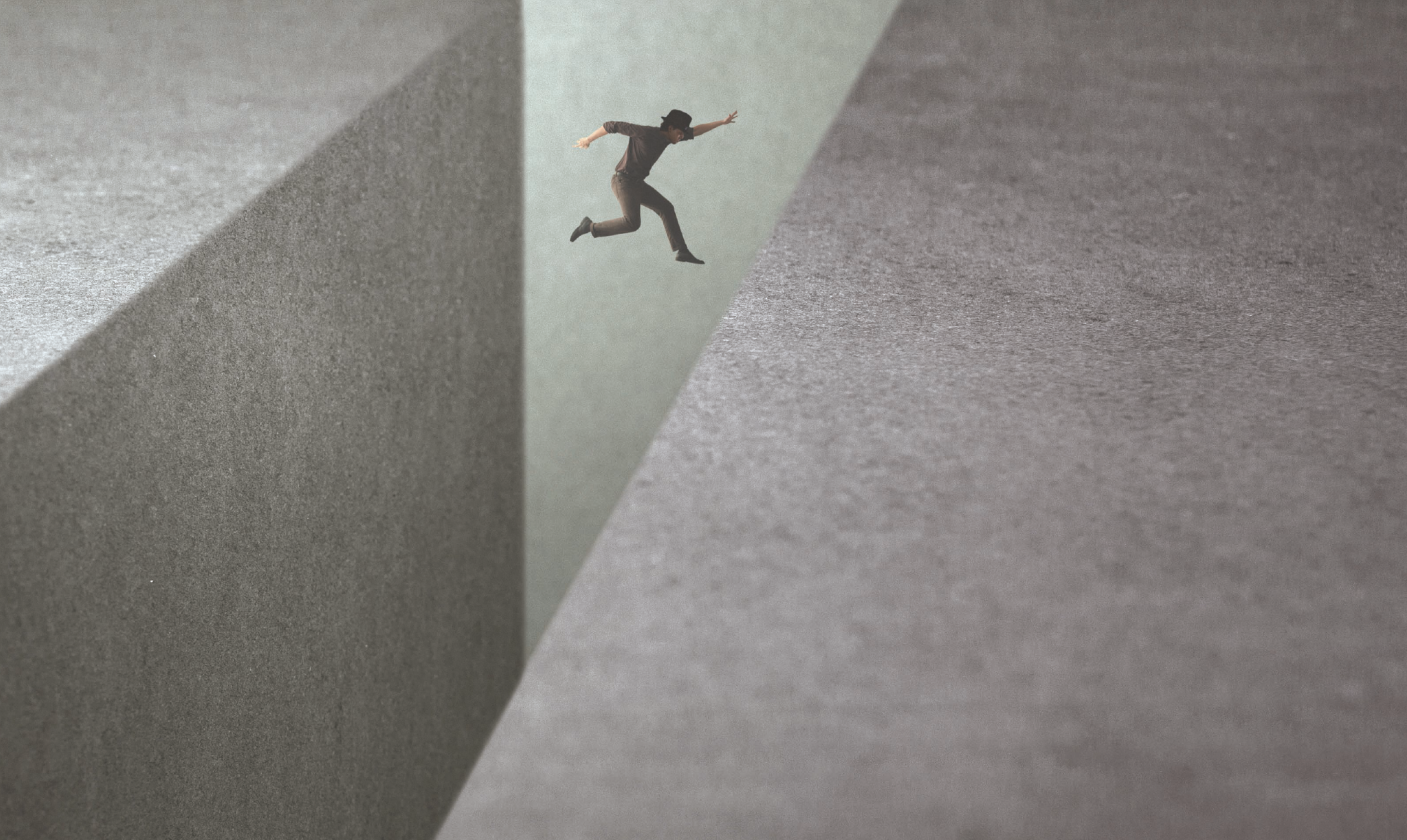 Fear can paralyse – or, targeted on valid concerns, can stimulate effective action and innovation

On 4 March 1933, US President Franklin Roosevelt uttered the famous words: “Let me assert my firm belief that the only thing we have to fear is fear itself – nameless, unreasoning, unjustified terror which paralyzes needed efforts to convert retreat into advance.” The quote is usually abbreviated to the italicized portion, but the full sentence conveys the psychologically accurate notion that fear was inhibiting the very actions needed to solve the challenging problems facing the nation. It points

to the tragedy of letting fear get the better of us, and getting bogged down by what I call ‘unproductive fear’.

Modern psychological research backs up Roosevelt’s claim. Fear can indeed paralyze, inhibiting the very behaviours that are vital to progress (see J Kish-Gephart et al, including the current author, ‘Silenced by fear: The nature, sources, and consequences of fear at work’, in Research in Organizational Behavior vol 29, 2009). I have been studying the problematic effects of fear in workplace hierarchies for more than 20 years. My earliest research showed that interpersonal fear in hospitals inhibited the error reporting that is so essential for patient safety and quality improvement – and, as I explore in my latest book, The Fearless Organization, numerous subsequent studies have found empirical support for the effects of ‘psychological safety’ – a state of low interpersonal fear – on learning and performance in teams across industries and sectors.

The explanation for these robust findings is that most work today is knowledge work, and most workers face considerable uncertainty and interdependence that must be navigated collaboratively to succeed. When people are afraid to speak up with questions, observations, concerns and mistakes, problems go unsolved, innovation is limited, and performance suffers.

Recent attention paid in the management press to the importance of creating psychologically safe workplaces is gratifying. However, confusion about workplace fear remains. Instinctively, people understand that erasing all fear at work is unrealistic – and maybe even counterproductive. They’re right. The key for today’s leaders is to recognize the difference between ‘problematic fear’ and ‘productive fear’.

Let’s start with the basics. What is fear? And why does it play such a central role in human existence? Psychologists, such as Nico Frijda and Batja Mesquita, define fear as an emotion that manifests as an urge to separate oneself from aversive events – that is, from unpleasant stimuli or situations. Fear is thus a spontaneous response to a perceived threat. We don’t consciously decide to become afraid, but once in its grip, our thoughts and behaviour are powerfully shaped by it. Although people can experience what is called a ‘generalized anxiety’ without a specific trigger, fear, in contrast, is an emotion in reaction to a target. That target activates an ‘action tendency’: to withdraw or distance oneself from the threat. In short, fear activates self-protection, a spontaneous – and at times healthy – human response to threat.

Evolutionary psychologists note that our brains are endowed with ‘prepared fears’: fears that are easily activated because of cognitive wiring from our evolutionary history. Yet some of these prepared fears no longer serve us (N Frijda, The Emotions, 1986). For early humans, ostracism was a truly life-threatening condition: if the leader didn’t like what you did or said, you risked being kicked out of the tribe, resulting in starvation or exposure. But today, the prepared fear of being ostracized leaves us vulnerable to being ineffective at work.

Interpersonal fear makes us hold back tentative ideas, questions and concerns. In a knowledge economy, where ingenuity and problem-solving are more valuable than conforming and keeping one’s head down, this instinctive self-protection can leave us worse off than we would be if we simply took a deep breath and spoke up. Our observations or ideas just might be the crucial data that shift the course of a risky project for the better, but our spontaneous emotional wiring has not re-adjusted for the modern world.

Of course, we face no shortage of targets to activate fear. A pandemic, violent behaviour, dangerous weapons and even an economic recession are all worthy targets. But fear is also activated by targets which, strictly speaking, are not dangerous to our health or livelihood. Much workplace fear can be categorized as irrational, in that our lives are not at risk, yet our physiological response mimics that to life-threatening stimuli. Fear of what others might think of your idea is especially problematic for knowledge-intensive work.

This points us toward the essential distinction between productive and problematic fear. When we protect ourselves from real threats, we live to see another day. When we protect ourselves from interpersonal threats, we are at risk of making the situation worse. Worried about what the boss might think, we hold back on sharing some out-of-the-box new idea, thereby failing to contribute to the project, thereby limiting innovation, and so forth. Meanwhile, a failure to speak up may even make the boss think less of us, because of our lack of contribution to the discussion. The widely held belief that “no one ever got fired for silence” is obsolete in any organization that depends on continuous improvement, effective risk management, and innovation for its success.

The distinction between productive and problematic fear is conceptually straightforward but practically challenging. As summarized in the table, the distinction honours Roosevelt’s admonition that fear, unchallenged, gets in the way of progress. In brief: productive fear pertains to real threats, physical or economic, and provokes action that leads to useful responses. For example, fear of contracting a potentially deadly disease like Covid-19 can trigger responses of social distancing and mask wearing. Fear of a recession can trigger redoubling of efforts to help customers solve their challenges. Fear of an objectively threatening or dangerous situation is rational, because it triggers problem-solving action. Whether a threat takes the form of impending layoffs, a car suddenly veering off the road, or the presence of a contagious disease, human beings can use the fear response to motivate productive action.

In contrast, problematic fear is the kind of fear that, if challenged – meaning we step back, pause to reflect, and ask ourselves good questions – shows itself to be unfounded. It may make things worse: reluctance to ask a question of colleagues for fear of looking stupid can leave an employee performing a task badly, or worse, being injured on the job. The essential distinction is that interpersonal fear – the fear of looking bad in front of colleagues or managers – is almost always irrational.

All fear is spontaneous; most fear goes unchallenged. This is a shame because, when challenged, the fear state is usually ameliorated. By pausing and thinking it through, we realize we have options. We can poke holes in our original fear response, coming to see that the fear isn’t necessary and isn’t helping.

Workplace fear that goes undiscussed – often believed “undiscussable”, as the late organizational learning theorist Chris Argyris termed it – is counterproductive and problematic. It reduces options, freezes us, and provides no dividends. In contrast, fear of real dangers, like an infectious disease, is nearly always discussable: shared, it can promote action, innovation and problem-solving. As such, it is productive.

A case study illustrates how productive fear can drive problem-solving when problematic fear is deliberately reduced by effective leadership. Most people will recall the 2011 tsunami that crippled the Fukushima Daiichi power plant in Japan, releasing nuclear material into the atmosphere. Fewer are aware of Daiichi’s sister plant, Daini, where plant superintendent Naohiro Masuda was tasked with leading his team to shut down all four reactors – a dangerous and frightening mission that was vital to the safety of the broader community.

Masuda approached the challenge with honesty, vulnerability and frequent communication. He shared the data available to him about the loss of cooling systems in three of the four reactors, and passed on new information as it emerged, enabling the team to shift resources from one unit to another as needed. By sharing bad news along the way, trusting the workers’ judgment, and creating a psychologically safe environment, Masuda and his team staved off catastrophe.

This highlights the crucial distinction between productive and problematic fear. Being afraid of the tsunami’s impact on the nuclear plant was both rational and productive. But had the crisis been compounded by a fear of speaking up, the team would have been doomed to fail. Masuda’s ability to remove problematic fears, such as fear of the boss, made it possible for workers to team up to implement solutions. As I wrote in The Fearless Organization, “Although their physical safety was in constant danger, they felt psychologically safe, and this allowed them to come together, try things, fail, and regroup.”

Most workplaces today need ingenuity and teamwork to drive innovation and progress in a complex, uncertain environment. Fear can inhibit both. Fortunately, we are capable of pausing to challenge and re-frame our spontaneous reactions to unexpected stimuli. To override prepared fears, all of us must learn how to challenge our initial responses and identify more productive responses.

Psychological research has noted that the unexpected stimuli which provoke fear can also trigger curiosity. When we force ourselves to be curious rather than certain (as in, certain that a target is frightening and should be escaped from), we become capable of considering our options more thoughtfully. We find a way to move toward rather than away from the ‘threat’ – to understand it better and realize it is, in fact, an opportunity for creative action. Because the benefits of recognizing and responding appropriately to workplace fears are so substantial, leaders must intentionally surface and manage them.

The power of productive fear in motivating us to face real threats calmly and creatively is immense – but only if we can reduce the problematic fears that hold us back.

Amy C Edmondson is the Novartis professor of leadership at Harvard Business School. Her latest book is The Fearless Organization: Creating Psychological Safety for Learning, Innovation and Growth (Wiley, 2019)