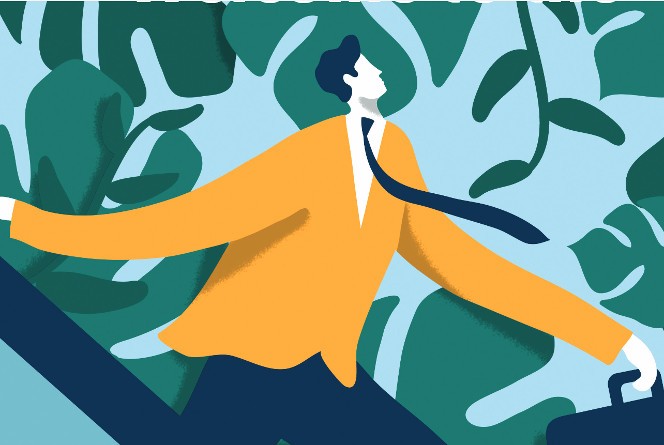 Jesus of Nazareth grew up in a capitalistic world – capitalism is as old as history. And it is a generally good model. Even the Dalai Lama, Tenzin Gyatso, believes it can function properly. “Capitalism is a working model,” he says. “We just need compassion.”

So, from 1AD to the 21st Century, the core challenge of capitalism has changed not a jot. The system requires empathy, which it lacks. In the traditional economy – still the reality for many today – capitalism is still a brutal model in which if you have a strong, positive moral value framework in place, you will be wiped away. Were Greek philosopher Diogenes of Sinope around today, he would still be roaming the streets with his lamp, searching fruitlessly for the honest man.

Yet the world has an opportunity to change capitalism for the better, because capitalism is in a state of flux. It is becoming wilder and more beautiful. Never has there been a more exciting time to leave a human footprint on this digitized planet.

The first step to making this disrupted, wild economy work for human good is to recognize that our rapid digital evolution is not really about IT and technology, they are merely its building blocks. Rather, the wild economy is more about a complete switch in philosophy around how world capitalism is run.

New-age philosophers are needed everywhere, in every industry, and in every organization. How will the world grapple with changes that seemed impossible just a few decades ago? Cash is dead. The cash rich are no longer the most powerful. Today, the real power lies with wild knowledge and ideas. And, in this new reality, the whole concept of capitalism is challenged, from every angle and aspect. Swarms of interdependent and connected young people are the new powerhouses. Never has the gap between 20-year-olds and 40-year-olds been bigger. Whereas 40-year-olds are regularly frustrated by the digital world buzzing in their pockets and eating up their time, 20-year-olds generally enjoy their digitally-connected lives – and use physical spaces as a secondary playground. Through participatory cultures,
co-creation, creativity and joy, they are working on the solutions of tomorrow. This epochal shift will hit capitalism and change how our financial and business ecosystem operates.

There are four key questions that managers and leaders who want to embrace the opportunities of the wild economy must try to answer.

What is going on in the business world today?
What is happening to the economy?
Where are organizations heading?
How can we learn and adapt to the new paradigm?

from usp to isp
The era of tailor-made

Humans are not rational beings. Rather we act on emotions and then try to justify our decisions retrospectively. Companies are very adept at manipulating our irrationality, leading us to make major off-the-peg buying decisions based on subconscious instincts. As the economy grows wilder, this will change. More transactions will be based on individual need, and will take place between peers. We are heading into a world of microcapitalism, where we digitally move small amounts of value (money) in exchange for products and services. The advent of bespoke sharing economy services like Airbnb and TaskRabbit show that this new world is already here. The economy will switch from being based on USPs (unique selling propositions) to being based on ISPs (individual selling propositions) – services tailored to individuals rather than mass markets. Owning things will become less important than accessing services. BluRay players and physical DVDs have already been rendered obsolete by UltraHD 4k streaming. Real-time services will evolve into ‘before time’. Our devices will know we will be driving up to the mountains at the weekend, and that it will be snowing, and will therefore proactively offer us three-day insurance: click to buy. Our digitized homes will know we are running out of toilet paper, and will order it for us, helping us avoid the empty roll problem. Will the buying of mass-produced washing machines one day be replaced in cities entirely by Laundrapp-style click-and-go laundry services?

dinosaurs repeated
The death of giants

The big dinosaur companies, carrying large bureaucracies, and held up by trade unions, are all going to die. Half of the jobs we have today will be gone by 2025.
These organizations are too big to change. They employ talented people, but these people are typically too similar to each other. The companies have failed to adapt to a world of diversity in the workspace. Less than ten years from now, we will see a multitude of small, very rapidly-growing companies mastering their niches. At that point we will move to a micro-capitalistic interdependent society where many specialized transactions occur daily. Larger corporations with a broader approach will have difficulty competing and staying relevant. Retaining scores of very similar executives – typically teams of white men aged 40-50 – will kill off companies. Instead, we will see structures whereby select groups perform tasks. The responsibilities of each individual will be clear. People will be assigned tasks at which they excel. Differences between workers will be exploited, not suppressed.

Since the Industrial Revolution, humans have been good at replacing old jobs with new fields and new jobs. But we have to get used to the concept of jobs becoming obsolete. In future, work will be more about handling tasks, where every time you do such a task, you get swiped some money. Time-regulated jobs are dead. Microinvoicing will be the new mode of work. This new paradigm will obviously favour those who are smart networkers. Yet there will be many people who are frustrated about this – hence the rise of anti-establishment movements like ISIS, AfD and Brexit. The wild economy values openness, collaboration and social connectivity: it has little to offer 33-year-old boys who live with their parents, entertaining themselves with video games and blue movies, closing themselves off to the world. Because social intelligence is the most tradable skill of tomorrow, such people will become surplus to requirements. Are Western economies ready for that? You cannot prevent it by giving someone useless tasks, meaningless jobs, or symbolic chores. Instead, we should prepare for it –teaching social skills in schools so that those who are not naturally blessed with them might learn them instead.

the new playing field
It’s all about the event

With on-demand TV consigning traditional scheduled television to history, the only value proposition that remains for commercial TV networks is live coverage of events, in particular sporting events. Events still attract huge advertising revenues. ‘The event’ is extremely powerful. When we ask people why they are satisfied with their jobs, and where they live, one of the most frequent answers is “something is going on here”. This is also why we have urbanized our planet into metropolitan cells, rendering the nation state an anachronistic unit – and consigning the countryside to being an economic junk space. Skilled workers want to live and breathe the events of the city. Similarly, the whole experience around the products and services a company sells must also be an event. In the wild economy, getting people talking and communicating is the only metric of success.

the xx factor
Women will rule the new world

We see it in academia. We see it in business. We see it in governments. Women are taking charge of everything. While politicians and the media have been discussing the lack of women, young women have spent the last ten to 15 years getting ready to eat the 50-plus-year-old white male dinosaurs at the tops of large organizations. The winner in the wild economy will be female 30- and 40-somethings equipped with networking skills and social media powers – skilled at talking with people, not at people.

RIP those old-school models that train us to become manual industry workers when there are few manual industrial jobs left. Many schools train the skills of the past and do nothing for training the skills of the future. Boring teachers and boring schools now have a clear and present competitor in the shape of international – and free – videos that you can watch where and when you want; collaborative learning techniques that engage and inspire; and digital networks with the power to educate and inform. In the wild economy, we must disrupt the school system, as its present incarnation serves no purpose. The first crisis will hit high schools and universities. Why the hell should I go to a dull school when all the great lessons can be found on the internet? And why should education end at age 18 or 21?

There is no point being afraid of wild capitalism, because the anxious will suffer. We need the free market to help us create a world where the good guys can outrun the bad guys. The economy will grow ever wilder. The chaos will increase. We live in the most exciting times. We will achieve. We will progress.
— Anders Indset is a business philosopher, investor, entrepreneur and keynote speaker