Rethink risk – you can gamble on probability theory

If you want a business that relies on skill, and not blind luck, then it’s time to brush up on probability theory. Professor Joe Perfetti explains

Ask most people to define risk in business and they will say it is about whether you make or lose money. Yet Apple had over $59 billion net income in fiscal 2018 – and between 1 October 2018 and 15 January 2019, its share price fell almost 30%. Apple had made a lot of money, but clearly, from a shareholder perspective, something else was at play. That something was risk.

Risk, or uncertainty, is critical to finance. In many ways, finance cares more about the potential range of outcomes than the outcome itself. In today’s highly complex and unpredictable marketplace, we need to shift how we think through uncertainty and calculate risk.

Take a look at the distribution of annual returns for three types of investments from 1928 through 2018. 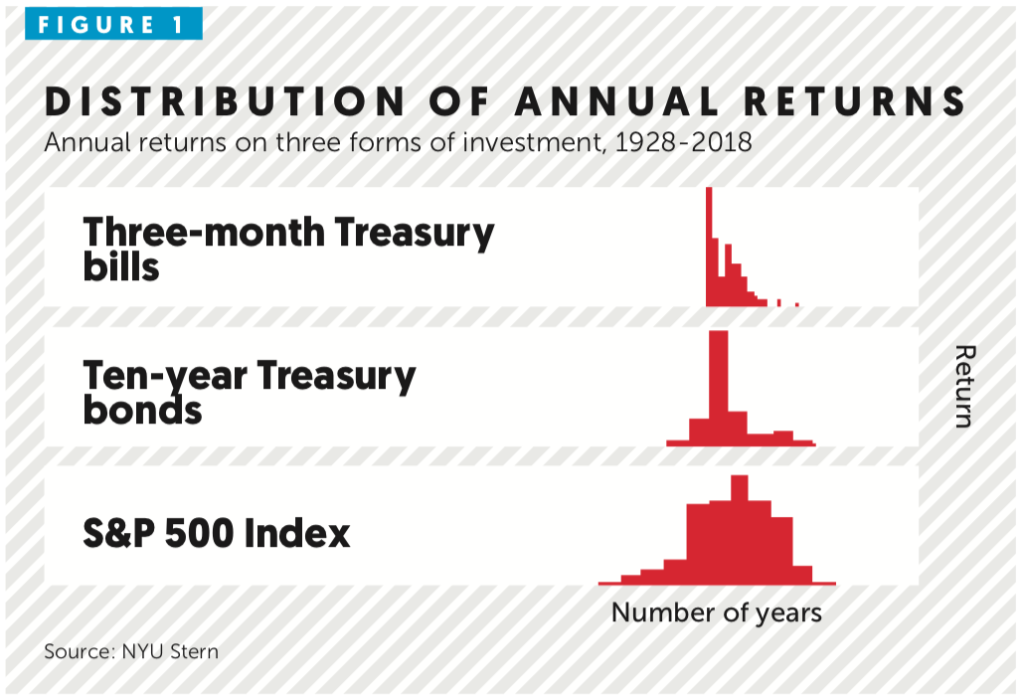 This is how risk is defined in finance: by the amount of uncertainty or the volatility of the outcomes. More uncertainty – that is, more standard deviation – in the potential range of results means more risk (although of course, this can be compensated for with higher rates of return).

The next time you go into a budget review, you should change your frame of reference. Your absolute performance during the month, quarter or year matters less than how you did against the plan. If you plan to lose money during a period of time and you lose what you expect, there is no risk in that outcome. The same would be true if you made money. The risk comes from how far away from the plan you end up.

In Apple’s case, the ‘plan’ for 2018 was to make a phenomenal amount of money selling iPhones. What was delivered – the ‘actual’ performance – fell well short of Wall Street’s expectations (the ‘variance’). Hence the tumbling share price.

Every budget represents a presumption – the result is acceptable, so if you stick to budget, things are going well – so every budget meeting is basically about two questions. First, how did you do against the plan? Second, why is it different and is there anything you can do about it? That is the risk lens that finance applies to the budget discussion, especially for multiperiod projects.

Take a look at Table 1 and decide which project is performing better. 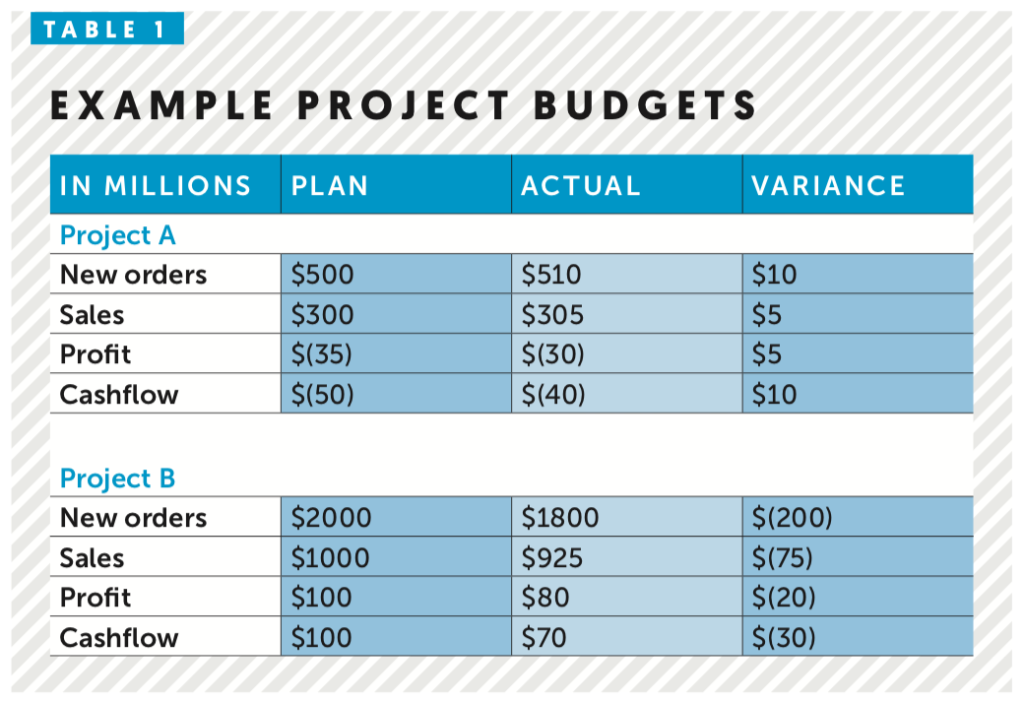 In a traditional budget setting, many leaders would favour Project B because it was more profitable than Project A. We also may not like Project A, because it is losing money and bleeding cash.

But from a risk perspective, the absolute performance is not the issue. These projects could be at different stages of the life cycle. Project A could be a launch product and Project B could be mature.

What matters is the variance. Some in finance use the metaphor of what’s ‘closest to the hole’: by that measure, Project B is further from its plan than Project A. From a risk perspective, Project B would have issues. My question would be: if you cannot predict accurately one period out, how can I believe your long-term forecast?

In general, most people have a bias to exceed the plan rather than not meet the plan. But that has challenges. If you didn’t spend what you were budgeting, the question you would need to answer is: why? If you explained it was due to something unexpected, the view from finance would be that you got lucky: that means you could be unlucky next time, and the real risk is higher. If you instead say you were originally conservative, it means you were not forthcoming. How then are you to be believed when you provide new budgets? Should finance arbitrarily cut your estimates? Funds were provided to you that you didn’t use, meaning someone else who needed them was turned down.

When the dust settles, we must be as accurate as we can and realize we are having a conversation about risk, not just results.

How do we get better at this, especially when we are uncertain of the result? The first step is to realize that you need to not only give a number (the expected return), but also provide a range of outcomes (the risk). In a fast-moving, uncertain market environment, defining this cone or range of uncertainty is critical to understand the risk of the decision. Below is an example of both the challenge and the potential solution.

Let’s say that you are given the option to flip a coin for $1. It is a fair flip – you could double your money or end up with nothing. To most people, the game is a 50/50 proposition, so on a $1 bet, their expected return is to have $1 after the flip. Herein lies the problem.

If you called the flip correctly and won, you have $2, while the person you played against has $0. Neither of you have $1 as expected.

Let’s plot this out using a simple diagram (Figure 2). 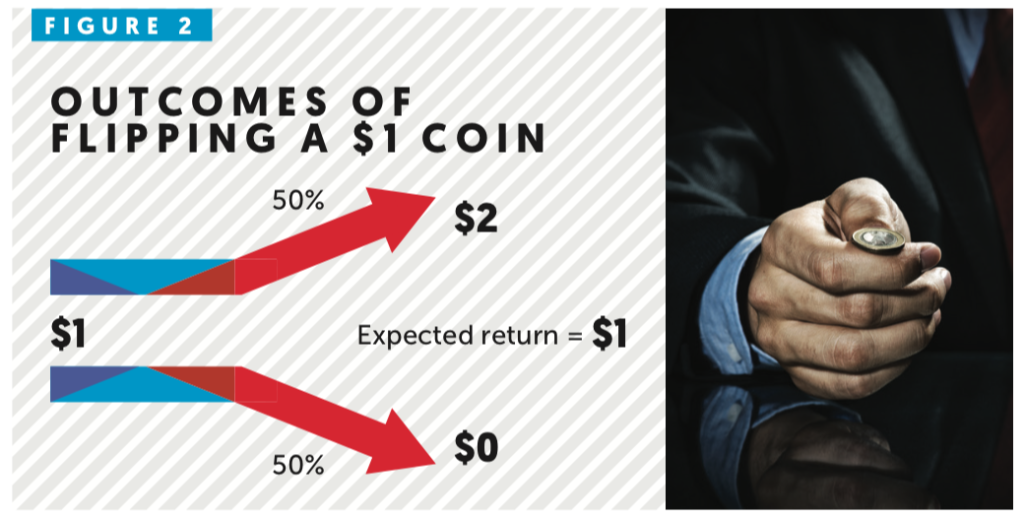 This is the risk of the decision. If you flip the coin only once, you either get double or nothing: it is impossible for you to get the expected return of $1. This risk is inherent with the coin flip, and it may not be fully communicated if you focus on the expected return.

If the coin flip were your budget, I would be looking for you to deliver $1 at the end of the year. But you can’t deliver $1. You will either deliver $2 or $0. By definition, risk and uncertainty is now in the system and an unplanned surprise will occur.

To add more complexity, imagine that another budget puts forth a plan to also make $1. But their range is between $0.90 and $1.10. If I do not know the ranges for both plans, and all I have to go on is the expected return, I might approve something without fully comprehending what I am getting in to.

To fully communicate the risk of the project, we must communicate the range. But it cannot be arbitrary, as is too often the case. When organizations ask for best- and worst-case scenarios it often means just putting +20% on the best case, and -20% on the worst case. Why not plus or minus 25%? Why not +15% and -30%? In addition to having a realistic range, it is also critical to communicate the underlying assumptions.

Thinking probabilistically and communicating assumptions provides for a much better plan and a far better understanding of the risk.

Even if you do everything right in the previous example, you are still betting on a coin flip. That might be too much risk to take. How could this game be played in a way that reduces the risk?

One way is to flip five times rather than just once. It is highly unlikely you would win five in a row or lose five in a row; mathematically, the likely outcome is that you would get closer to the expected return. The practical application is to make more small bets and fewer big bets. This is the basis of real option theory; it’s the theory behind the idea of ‘failing fast’, and what Google calls failing well.

In finance, ROI is often defined as Restriction on Investment. Especially with early-stage projects, it is often difficult to prove a viable return, and successful organizations do not like failure. They no longer want to flip coins. This is risk aversion. Getting round this might mean changing the conversation. Are you willing to spend money to purchase information? Are you willing to run an experiment to gather data, which will help make a better decision when a very important opportunity comes up? If we treat the investment as an option, with choices along the way, then the game changes.

Now, if we make a small bet and it doesn’t work out, it is not a failure: it is valuable information. We do not have to proceed further. But if it does work out, we can proceed with an additional bet.

In today’s uncertain world, the agile organization is changing how it evaluates decisions and how it places its bets. Traditional organizations are paralysed by uncertainty and accountability systems that do not allow failure. Agile companies are instead using real options and probabilistic thinking to be flexible, learn, adapt and move forward.

Thinking in ranges and probabilities is nice in theory, but will it work in your organization? Sometimes the cost of failure is perceived to be so high that employees are not willing to take risk. To test your organization’s risk culture, consider this scenario.

In an agile culture, we cannot reward outcomes. They are often based on luck and we might inhibit risk-taking, as good decisions with poor outcomes would be punished. Worse, the celebrated bad choice, good outcome behaviours might be replicated, having been mistakenly credited as successful.

Besides, in the real world, the bets are not completely independent. If the organization learns from its failures it can reduce money-losing options and improve moneymaking options over time, while getting better at evaluating probabilities and making decisions. Google’s purchase of Motorola to get into the mobile phone business was a failure, but the lessons learned helped in launching the very successful Pixel smartphone.

Next time you find yourself in budget discussions, remember that risk is about uncertainty. Make sure you understand your risk and how you communicate it. Whether evaluating a budget or a specific decision, we need to start thinking in terms of ranges, probabilities and smaller bets. That will equip us to make better decisions in uncertain environments and set up an environment where skill, not luck, is rewarded. You will also be better prepared to act in an uncertain environment and not be inhibited by having to provide a hard ROI. It’s the only sure-fire bet on the table.

— Joe Perfetti teaches equity analysis at the University of Maryland and is an innovation fellow with Duke Corporate Education. His Building Financial Acumen course is available at www.dukece.com