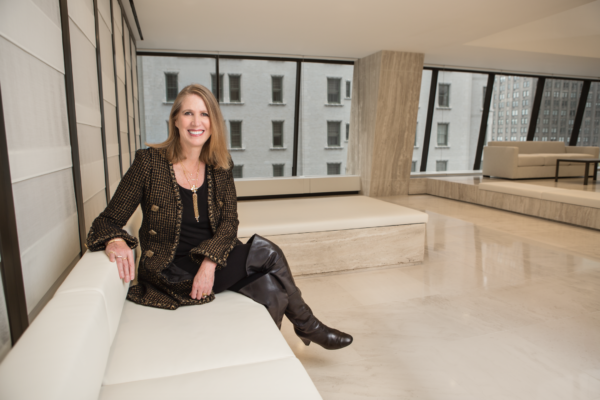 The snow is pounding down. Or, rather, it’s not. Susan Clatworthy got out of Dodge. She left New York and headed home to Connecticut in anticipation of a promised blizzard. The skies remain stubbornly clear. “What’s interesting is that they are talking about 10-12 inches of snow and the reality is we have nothing,” she says. “They keep on with the craziness: ‘when you wake up in the morning there will be a foot of it’. To be honest, I’m sceptical. They often exaggerate. Maybe it’s just a slow news day.”

The hollow drama over the weather is all too much for a tough Midwestern girl to take. “Where I was raised, snow was just a way of life,” she says. “So, I’m sorry, but what’s the big deal? Everyone here has hunkered down and it’s another ‘snow day’ at the schools. For working women, it’s just incredibly hard to work out what to do, unless you are blessed with a grandparent or friend who lives next door. I talk a lot about work ethic, but even if you have an amazing work ethic you sometimes just can’t figure it out. Many employers are not that sympathetic.”

Clatworthy says her experience with Chanel was different. The French luxury house employs many women in the sorts of gainful, creative roles that Clatworthy, who has just retired, has relished and thrived on for years. As head of fashion merchandising for Chanel US, Clatworthy has enjoyed a decorated and rarefied career woven with the daily thrill of the international fashion business. Yet the stoic, matter-of-fact girl from Columbus, Ohio, still fills her designer boots. “Chanel tries to be female-friendly, family-friendly, mother-friendly, because you know, when it snows, when your children are sick, what else are you supposed to do?”

Her practicality is born of a deliberate honesty that Clatworthy pursues in herself and seeks in others. Yet her determination to root her feet on the ground has sometimes worked against her own interests; her modesty endearing but unwarranted. When young and applying for a job, her potential employer inquired how much she expected to earn. She wrote $2.25 an hour on the application form. “I didn’t want to seem too expensive or presumptuous,” she recalls. When her mother found out, she insisted that Clatworthy return to the employer and tell them she had made a mistake. “And, so I did,” recalls Clatworthy. “The ladies at the desk had obviously reviewed my application and were chuckling when I came in because they had an immediate idea of what the change was going to be. At that moment, it seemed as if they genuinely appreciated who I was, along with my eagerness, innocence – and apparent bravery. Long story short, I got the job.”

It was an early learning in what Clatworthy memorably brands “hiring the DNA not the MBA”, noting that the two are not mutually exclusive. Here was a young woman who had messed up her application form, submitting derisory earning expectations that might easily have been interpreted as her failing to value her own worth. Yet her response, to march down to the employer’s offices and own up, said something more profound about her.

Later in life, when she got the job at Chanel, she says, “I wasn’t the best candidate on paper”. But she showed up. “They respected who I was – beyond what I was going to deliver – they saw something in me, the person,” she says. “I saw that throughout my career. There were times when I got promoted to positions over and above people who were in the competitive race with me but who hadn’t developed that human touch, that appreciation for people and others. They were just dogs with a bone. They kind of came at it with whatever it takes to deliver. They didn’t care – to be frank – who they stepped on along the way. That’s never been my MO. And the company saw that about me.”

Did she ever feel that she traded a little success for being nice? “You know what? No. Because the business happened anyway. You have to ask yourself what success looks like. For me it’s always been about engagement, empowerment of people, helping people be their best self. The business then happens.” She draws an acute comparison between serving her employees and Chanel’s boutique staff serving their customers. “At Chanel, I talked about service first and sales will follow,” she says. “I believe that if you give the service, if you are gracious and connect, they will come to you – because you made a remarkable memory for them.”

Still, behind the personal warmth and the people-first attitude, she found enough steel to carve an upward path. She forged her way through the industry, starting at Bloomingdales and enjoying spells at Donna Karan and Liz Claiborne between her two stints at Chanel (her first spell at the French luxury house was in the early 1990s). Yet she wasn’t always a natural ladder-climber. Another early-career exchange with her mother became a turning point, leading her to the view that opportunities should be appreciated, not declined.

“I was working at a department store and told her that I’d been offered a position as a delicatessen buyer, and she said, ‘Susan that’s just fantastic, this is your first real promotion, your first real job with a title!’” But the young Clatworthy had already told the company that she was unsure about taking it. “My mother looked at me and she said, ‘how dare you? How dare you tell the president of this company, who has chosen you above all others, that you don’t want the job that he has for you?’” Clatworthy Sr reframed it as a moral question rather than a vocational dilemma. “My mother told me: ‘Go in tomorrow morning and tell them, ‘thank you for believing in me, thank you for choosing me, I will not disappoint you, I will do a great job’.’” 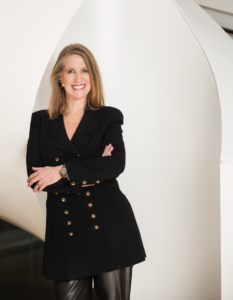 Her mother’s reluctance to unthinkingly take her daughter’s side in workplace matters served Clatworthy well. It was her mother, too, who helped Clatworthy develop another of her guiding lights – that professionals should recognize and concede their vulnerability, so that they might learn to mitigate it. She recalls an unflattering – and unsuccessful – pay review early in her career. The young Clatworthy stomped home, mad at her boss, Cindy, and immediately imparted the conversation to her mother. “The review was very nice about how I worked with people and how passionate I was,” she recalls, “but on the flip side, Cindy said, ‘you don’t really understand this business, you are not really getting it and I don’t see you trying hard enough at that, and you aren’t connecting how we make money here’. I was incensed. She gave me no raise and set me on my merry way.”

Having heard this account, her mother looked back at her over the dinner table very calmly and said, “Well, do you understand the business?” Clatworthy admitted that she didn’t. In the months that followed, Clatworthy, with Cindy’s mentoring, worked tirelessly until she did. The honesty shown by Cindy, and the vulnerability – eventually – demonstrated by Clatworthy led directly to her development. So why aren’t more leaders honest and prepared to show their own vulnerability?

“Leaders should lead by example, but so many of them don’t,” she says. “Most leaders won’t show their own vulnerability. But they should, because only by doing that can they create a culture where other people are prepared to show theirs. There isn’t a leader in the world that doesn’t talk about ‘safe to fail’, ‘okay to take chances’ – but how many of those leaders – really – are okay when those chances run amok? How open are they to giving someone a good old-fashioned ‘A’ for effort? Not every act will lead to the perfect result.

Only the very greatest leaders today talk openly about how their failures lead to successes. People can only do that if they feel safe to do it. And that’s about company culture – a cultural world that leaders should create, but often don’t.”

Humans’ determination to lock themselves inside a digital fortress has exacerbated the malaise, Clatworthy argues. She has strong views on the march of technology, contending that it has reduced humans’ ability to communicate their hopes and fears. “Connecting is what humans are supposed to be about,” she says. “Yet it’s dogs and cats who get all the credit for unconditional love – and they are the ones that are not tied into technology! Every dog and cat owner in the world has a better relationship with their pet than they do with some of their colleagues. That’s a big responsibility for cats and dogs, as upon their shoulders rides the happiness of every family in the United States!”

She implores people to learn again the joy of face-to-face contact; talking to one another; making the human difference in a rampantly digitized world. “The human touch is getting lost,” she says. “I know that the technological revolution is everyone’s future, but the pendulum has swung so far; it’s time for us to come back to the centre. There is all this energy around boosting science, technology, engineering and mathematics in schools, but I think we need to have a rethink about that and come back to humanities, anthropology, psychology and the study of human behaviour. Because what makes up the human condition is heart, body and mind – kind moments, gentle touches, gracious hellos and long, hard belly-laughs. That is humanity. That is connecting authentically.”

Not that she professes to have all the answers. Now, upon retirement (Clatworthy granted her valedictory interview to Dialogue), she describes herself as “still a big work in progress”. “I set out to take control of me,” she says, “but I’m still me. I still have some of the challenges I had when I was 21. The difference is I can laugh at myself a little more, I’m more self-aware, I can move through it.”

She glances outside. It’s still not snowing in Connecticut; maybe it is in Ohio. It’s striking how clearly Clatworthy recalls her past. She blinks and she’s back there. In some ways, she never left.