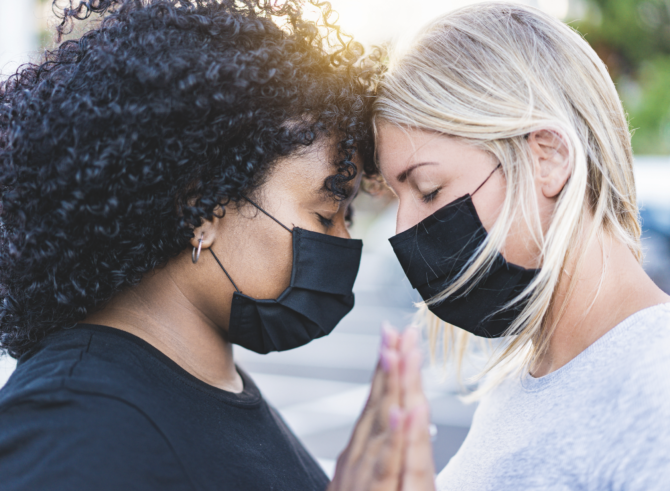 Advancing racial justice requires a new approach that goes beyond allyship, according to the latest book from Emma Dabiri.

The racial justice debates that raged through 2020 and 2021 have quietened. A few months ago, it seemed that social media was filled with black tiles. The streets swarmed with anti-racism activists and prominent companies were posting cheques to campaigners. Now, however? Near silence

The ‘trendiness’ of racial justice’s appearances on the pop culture radar is in part due to the performative nature of how we now approach critical social challenges, says Emma Dabiri, an Irish academic and the author of What White People Can Do Next: “We seem to have replaced doing anything with saying something, in a space where the word ‘conversation’ has achieved an obscenely inflated importance as a substitute for action.”

The sudden absence of noise for racial justice is eerie to this reviewer. But, like most people racialized as ‘white’, I question if I am ‘allowed’ to point it out. Or, indeed, say or do anything related to racial injustice that is not in some way rubber-stamped by at least a few million Twitter users. Dabiri would identify this fear as a characteristic of ‘allyship’ – the main form of pro-racial justice demonstration since the early abolitionists.

From allyship to coalitions

An ally – as defined by diversity and inclusion consultant Holiday Phillips, and according to Dabiri’s chosen explanation – is someone “from a non-marginalized group who uses their privilege to advocate for a marginalized group… they transfer the benefits of their privilege to those who lack it.” Dabiri argues that this definition implies white people need to ‘give up’, to some degree or another, their privileges – to transfer them to others. She notes that this sounds neither attractive nor possible. And she points out that the idea of allyship centres on the belief that there are significant and otherwise impassable divisions between people that need to be bridged: she argues that this is also not the case.

In place of allyship, Dabiri suggests that we focus on coalitions. Coalition, she writes, is a form of unifying based on our shared similarities and empathy. It means highlighting commonalities rather than differences. Dabiri draws on an example from writer Shafi Musaddique, who has suggested – in the UK context – that if we were to focus on shared experiences, we might notice that Bangladeshi people have a lot in common with politically invisible people from the poorer areas of northern England. Another example might be that mothers racialized as black are five times more likely to have difficult births than mothers racialized as white – but people of all races and backgrounds have children. Dabiri argues that a coalition based on empathy, which drives action for the good of all people, is far more powerful than some people campaigning for the good of other people.

Humility, realism and empathy are recurring themes. Dabiri writes that she knows not everyone will – or even should – read this book. Instead, she focuses on individuals in power, urging them to lead with empathy and coalition, so they can better represent the interests of all people. The book is less a practical manual than a philosophical call to stop saying and start doing. Dabiri asks white readers to let go of anger and sadness; to question authority and power; and above all, to look for similarities between themselves and others.

Dabiri’s first book, Don’t Touch My Hair, garnered praise from reviewers around the world and What White People Can Do Next is in many ways an excellent follow-up.

It may not, however, attract nearly the same amount of attention; simply, there are more accessible books on the social sciences shelf. The publishers have done their best: the paperback print is a pint-size pocket-filler, featuring a pretty (if overtly feminine) cover of embroidered pink flowers. It is, as those who most need to read this book would say, perfect ‘for the gram’. In a culture that prioritizes being seen to say something as opposed to actually doing it, perhaps that is what is most important: infiltrating social media.

But while What White People Can Do Next may look sweet and soft, it covers difficult realities, asks challenging questions, and packs a punch that’s backed up by weighty academic research. It’s studded with peer-reviewed journal articles and punctuated with thoughts from established commentators such as Cornel West and the late bell hooks. Yet the vocabulary is intractable, and clearer formatting would make it a more accessible read.

The ideas at its core make What White People Can Do Next deserving of recognition as an important book. It is a powerful essay on the inherent limits of allyship, and a stirring call for a new, more empathetic approach to delivering change. But the book’s lack of accessibility is likely to prevent it from becoming widely read.