Rooms, rides, raincoats – everything these days, it seems, can be shared. There’s even a platform for sharing Rottweilers. The sharing economy is the biggest societal shift since the Industrial Revolution. Yet, despite the media focus on the sharing economy, there’s still confusion around what the term means.

Importantly, it’s an umbrella term, a whole “socioeconomic system built around the sharing of human and physical resources”, as I wrote in 2012. It’s a hybrid economy that acknowledges different forms of value exchange – social, economic, environmental; and different types of sharing – swapping, renting, borrowing, collaborating and accessing shared resources.

The global sharing economy was valued at $15 billion by PwC in 2014, forecasting that it would reach $335 billion by 2025, a 20-fold increase in just over a decade. But what happened next defied all expectations. When PwC revisited its research last year to examine the situation in the UK and Europe, it discovered that the sector was on course to outrun even its bullish 2014 prediction.

The sharing economy is not to be ignored. There are more than 10,000 sharing platforms, apps and businesses worldwide. But with a third of the global adult population choosing to access the economy rather than buy their own goods, what interests me is the human dimension. I set out on a mission to discover and meet the people behind the sharing.

In the beginning, the citizens creating and driving the sharing economy were Millennials, who sought experiences, adventure, and had a desire to belong. I gave them the moniker ‘Generation Share’: a global peer group, connected via technology, united by the desire to share resources – and driven by possibility.

Research showed that of the world’s 2.68 billion Millennials, 73% saw the sharing economy as important to them, preferring to access rather than own goods. In the early days, most sharers had a degree, or other qualifications, and were high earners.

The sharing economy, it seemed, was a young thing, an educated thing and, most certainly, a middle-class thing.

Fast forward to 2017, and Generation Share has sucked in many more than its early hip Millennial adopters. Now, over 28% of the global adult population is participating. Some 25% of sharing economy service providers are over 55. Participation rates of over-55s on some sharing sites has boomed – adults aged 55-64 choosing renting, sharing and swapping over ownership has increased 80% in the last 12 years. Millennials may still form the largest group of sharers, but the sharing economy has spread well beyond its earlier demographics.

In November 2016, I set out to meet and document these very people for a photography book and media project called ‘Generation Share’. My creative partner is photographer and visual storyteller Sophie Sheinwald. Our recent, successful Kickstarter campaign to raise funds for the European leg of Generation Share demonstrated the passion and support for a new, human economy that puts people and planet at its heart.

What we’ve learned so far is that Generation Share goes beyond age, economics and geography. Rent, borrow, swap, exchange, collaborate – these are the activities that epitomize this generation. Generation Share is a mindset, rather than an age demographic; it’s an approach to life, work and being. For the growing numbers who are participating, it’s about a meaningful, authentic and smart way of living. We can access, be and do the things we need. We are defined by what we share. We are what we share.

As sharers are by definition both producers and consumers, a term – prosumer – has been coined to define them. These social, conscious, discerning ‘prosumers’ and micro-entrepreneurs (micropreneurs) make decisions on more than just price and economic value. Social value is a key driver, with community, meaning and experience responsible for the participation rates and ultra-high-speed growth of the sector.

Generation Share does not rely on large corporations for their products and services; they connect with peers to co-create, swap, borrow, rent, collaborate and trade. The generation is more DIP (do–it-with-peers) than DIY, and with around $4 billion worth of idle resources in the world to access and share, who can blame them? Why own things when you can share them?

Generation Share understands the importance of trust, and knows it is possible and necessary to safely trust strangers in order to share with the crowd. When we do, we open up a world of adventure and possibility. 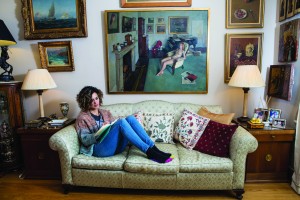 To say that 35-year-old Greek-American Mary Valiakas is up for a challenge is an understatement. She’s started a movement called Oi Polloi, inspired by the Greek spirit of resourcefulness. The idea behind it, is that change doesn’t need to come from the top. We, the people, can create change for ourselves, using technology like blockchain, as well as philosophy and imagination. She’s making waves achieving this by connecting and promoting like-minded thinkers and projects in Greece that empower people by accessing and sharing much needed resources. 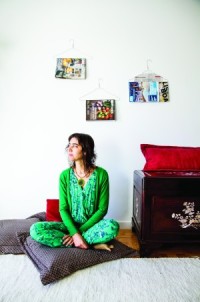 Our first Generation Share adventure took us to Portugal and the home of Candida Rato, a 37-year-old whose job description doesn’t exist, and for whom the sharing economy forms the fabric of her everyday life. Sharing is in Rato’s DNA, and every item in her Lisbon apartment has been shared, salvaged, upcycled or borrowed. Wire coat hangers fastened to the walls make a beautiful magazine rack. A give-and-get box by the door is for anything you don’t need that you’d like to share and, of course, if there’s anything you do need, you might be able to find it in the box. 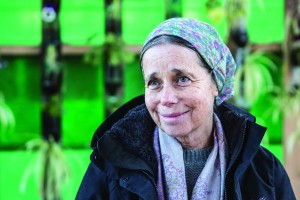 ISRAEL – Kibbutz in the city

In Israel, we met 58-year-old Tamar Ben Shalom, who in 1989 decided to set up an ‘urban kibbutz’. Her vision was to bring nature and the sharing principles of the kibbutz to the city. In a drug-ridden, polluted neighbourhood of Jerusalem, she set out on a seemingly impossible mission to “bring the birds back”. Incredibly, she succeeded and now runs an urban school where kids learn cooperation, acceptance and how to garden. By teaching children to grow plants together, Ben Shalom believes they learn to see each other as human beings, as well as to care for the environment in which they live.

Benita Matofska’s book Generation Share is due to be published in 2018. 4-11 June is Global Sharing Week.