Your mind can drift. But with simple techniques you can turn it into a brilliant problem solver, writes William A. Cohen

Good consultants win plaudits. Some are deemed “very smart”, others are lauded as “good communicators”, “charismatic”, “innovators”, or applauded for being “born salesmen”. No such faint praise for Peter Drucker: he was an acknowledged genius.

Drucker’s brilliance led to his different approach to consulting and his perspective on management. Drucker’s consulting model centred around asking questions.

Years ago, I read an article in which the author advised that talking to yourself can be useful in solving problems and making management decisions. The author maintained that if you talked to yourself and asked your brain questions, treating it as a separate entity, you would frequently be rewarded with effective answers. Your brain would answer – or at least attempt to answer – any question you decided to ask it.

I tried this technique and was surprised by just how easily it worked and how frequently it provided me with (sometimes immediate, often highly effective) answers to some of the questions we all face regularly.

Psychologists tell us that one reason for this phenomenon is that our brains already have all the facts necessary for problem resolution stored away in our memories, but it can be difficult to access these facts directly. Questioning the brain as a separate entity bypasses many of the psychological blocks and eliminates much of the garbage that prevents us from answering questions or identifying solutions.

The pressures and stresses under which we struggle are sometimes too great for this simple technique to bear fruit. However, the brain may be working subconsciously, even while the conscious mind blots out the useful information emanating from it. The question, then, is how we separate the conscious and unconscious minds.

One answer is to create a diversion, to actively distract the conscious brain. This may be done in a variety of ways. Inventor Thomas Edison used the simple technique of sitting quietly in a darkened room. Others take a nap or simply go to sleep at night and find that they wake in the morning with the solution to their problem. I’ve had this happen to me without any effort, and maybe you have, too.

Scientists at Carnegie Mellon University found that the key to this technique was distracting the conscious brain, even for a short period of time, while allowing the subconscious mind to continue its job. They investigated the brain workings of individuals attempting to solve problems their conscious minds couldn’t handle. Setting the problem as the need to buy an (imaginary) car, complicated by conflicting and multiple wants and needs, they divided subjects into three groups (see box, p77). The researchers discovered that simply distracting the group for a few minutes led to their making much better decisions.

Peter Drucker’s Five Most Important Questions were collated in a book of the same name, edited by Frances Hesselbein, winner of the Presidential Medal of Freedom from President George HW Bush, and one of my official presidential advisers at the California Institute of Advanced Management.

1. What is your mission?

Drucker’s favourite mission statement came from a very old business, founded in 1893. It was his favourite for good reason. It transformed Sears Roebuck from a struggling mail order catalogue company, flirting with bankruptcy, into the world’s leading retailer, in the space of ten years. What were these magic words? That Sears Roebuck would be the informed and responsible retailer, initially for the American farmer, and then for the American family.

Does my own organization, the California Institute of Advanced Management, have an identified mission? You bet it does: to provide a flexible, affordable and high-quality education, based on the principles and values of Drucker – the father of modern management – to enable students to apply their knowledge and ability immediately, with integrity and success.

2. Who are your customers?

My friend, entrepreneur Joe Cossman, started selling garden sprinklers, comprising a flexible plastic hose with holes in it. He sold mainly through supermarkets and similar outlets. One day, he read that his hose was being used in poultry farming as an inexpensive way of cooling poultry pens during the hot summer months. This led him to redefine his business and open up an entirely new market for his product. Businesses need to track sales continually, so they can identify their customers. Sometimes, your customers are not who you think they are!

3. What do your customers value?

In the mid-1980s, Coca Cola made a huge mistake when it attempted to introduce ‘New Coke’ in response to the ‘Pepsi Challenge’, which was slowly eroding Coca Cola’s market share.

Pepsi, its arch-rival, had challenged the public, through a series of television advertisements and live events, to blind taste its product against its chief competitor. The tests revealed that Americans leaned towards Pepsi, a sweeter drink than classic Coca Cola.

In response, and to much fanfare, Coca Cola introduced ‘New Coke’ as a revolutionary soft drink. You could almost hear Coca Cola marketers shouting: “So you guys at Pepsi want a challenge do you? We’ll give you a challenge!” Coca Cola had carefully conducted its own blind taste tests and formulated a product that was sweeter than its classic brew – and consistently preferred over its own original product – and Pepsi Cola.

There were two problems. First, as business psychology writer Malcolm Gladwell points out, scientific tests have shown that most consumers prefer a sweeter drink when asked to take just a single sip. In prolonged consumption, however, sweeter products are often less popular. Second, taste was not the only thing Coca Cola’s customers valued. Above all, they valued Coke’s image. It represented the US and was as iconic as mom, apple pie and John Wayne. Coca Cola’s previous campaign – stating that Coke was “The Real Thing” – resonated with this market. The American public rebelled in huge numbers against ‘New Coke’ which appeared not to be the real thing at all. After spending millions of dollars in advertising and promotion, and taking on detractors face-to-face in the media, Coca Cola surrendered and New Coke was quietly withdrawn from the market. 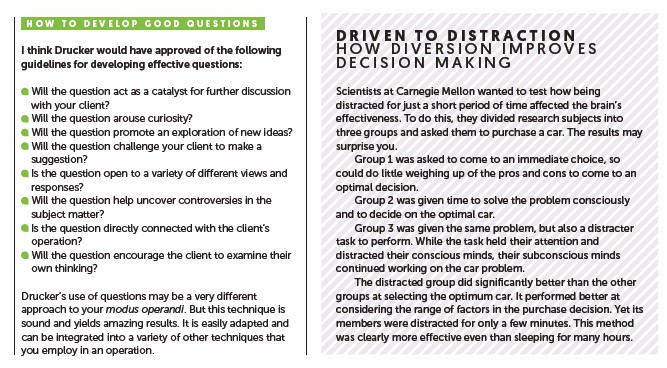 4. What results are you getting?

Drucker knew that without measuring results, you would not make any progress. You would not, in fact, know whether or not progress was being made. By results, Drucker meant numbers. “Show me the money!” doesn’t just mean cash. It means quantified results.

Drucker wrote that a leader must answer three questions, before developing a plan. The first was:“What business are you in?” That one is pretty much covered in the mission question. But he had two further questions:

These questions should be considered separately, but also integrated. The present is connected to the future. We have short-range plans for projects, products and initiatives. These have an impact on our business in the near future, whether we like it or not.

What it should be is a question about the more distant future. How far distant? I’ve seen  organizations plan for 25 or even 50 years into the future. Regardless of the time horizon selected, the answers to the three questions must fit together. You don’t suddenly jump from the business you are in today without taking intermediate steps that help you realize what your future business should look like.

Dr William A. Cohen is president of the California Institute of Advanced Management. He was the first graduate of the PhD programme for practising executives co-founded and developed by Peter Drucker