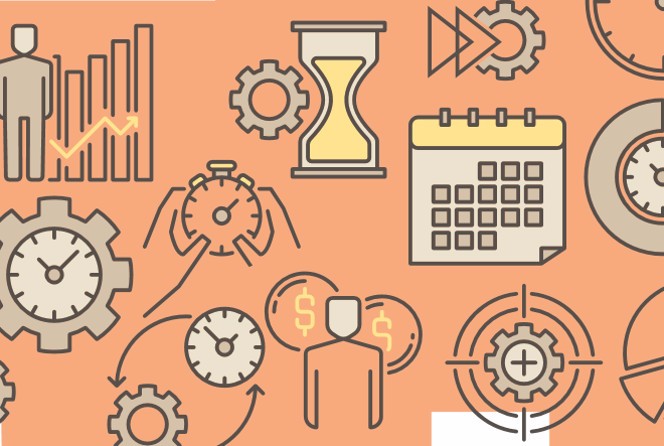 Speed matters. In the fashion world, the fast-fashion revolution has transformed clothing companies like H&M into billion-dollar brands. The days of waiting six months for the latest fashions to hit store shelves from the catwalk are gone, with firms like H&M cutting the time to three weeks. The hottest styles, sold direct to consumers, are priced a quarter to one-third that of high-end retailers.

Fast-fashion companies like H&M are winning in the financial marketplace as well. In 2015, H&M generated an operating profit margin of 11%. Contrast that with 9% for a traditional fashion retailer like Ralph Lauren. But where H&M really shines is its cycle time. H&M takes 104 days to achieve an operating profit margin of 11%. In contrast, Ralph Lauren makes a 9% margin every 169 days.

The impact of this productivity gap is dramatic. For Ralph Lauren, the additional 65 days of cycle time means approximately $1.3 billion of extra capital is tied up every year that its more nimble competitor doesn’t carry. Clearly, knowing your FCT has real shareholder impact.

The productivity transformation going on in fashion retail isn’t unique. Plummeting margins from global competition are forcing firms from the automotive to the aerospace industries to drive greater efficiency. Until now, companies have had difficulty in quantifying the impact of productivity on shareholder value. Now, using standard balance sheets and income statements, they can measure the impact of productivity and quickly benchmark across peers.

That productivity equation might sound relatively simple but, traditionally, many chief executives and chief financial officers haven’t thought that way. Instead, most focus on their income statement to determine if they make more than they spend. They concentrate less on cycle time, or how long it takes to turn investment into collected cash from a customer. Sustainable investing directs investment capital to enterprises that seek not just to make a profit but to make the world a better place.

Investors, on the other hand, want to know how much cash a company generates for every dollar of investment. C-suite leaders’ mindsets need to focus on both components of return on investment – their profitability and how long it takes them to make it.

Many organizations have tried to drive productivity using traditional operating metrics. They look at data to determine measures such as:

How much revenue is generated per employee

The utilization rate for a facility

You can find how these performance metrics map directly to financial statements in a way that is immediately understandable to your operational employees, who then can drive shareholder-enhancing improvements.

Why do profitable companies borrow money? If they generate more revenue than expenses, one might think that they shouldn’t need to borrow any money. But that isn’t the way things work. Because they have to spend money before they get paid, they need to fund the timing gap between when they spend the money and when they get paid. The longer the timing gap, the more financing is required. This timing gap is the FCT (see full graphic version, link at top).

We have developed an approach to measuring cycle time based on the formula overleaf. You can use the formula to measure your company’s cycle time. Take total invested capital and divide it by annual revenue (see full graphic version, link at top). That tells you the percentage of the year that you are tying up capital. Then multiply by 365 to translate the metric into days. The result tells you how often, on average, it takes to turn invested capital into revenue.

Knowing your organization’s cycle time generates powerful insights that you can use to drive improvements and increase shareholder value. You’re able to use language employees understand. For example, say you need to improve productivity by five days. You can measure both the time and impact. Let’s return to the Ralph Lauren and H&M example. Last year, Ralph Lauren generated 20 cents less for every dollar invested than H&M. It could close the investor return gap by becoming more profitable. But that might still not be enough – because H&M is making more profit and it is doing it 65 days faster.

But that’s not all. Last year, Ralph Lauren had about $3.4 billion of total capital tied up. For every day that Ralph Lauren closes the gap with H&M, more than $20 million is freed up. So closing that FCT gap is rather like squeezing a wet sponge – except in this case, you wring out dollars instead of water.

Regardless of whether you are a global retailer or an energy company, you now have a simple yet powerful tool to measure productivity, find and address gaps in processes, and deliver return on investment that has real financial impact. Future issues of Dialogue will feature companies that have responded to this metric, and transformed how they operate.

A tale of two companies

Two companies in the same industry with very similar market focuses and financials generate a profit margin of 8%. But the first company makes that margin every 365 days compared to the second company’s cycle time of 183 days. Annually, that translates to 16 cents of cash for investors compared with eight cents of cash for the slower company. The more productive and efficient company wins financially.

The companies to beat

Whether it’s Amazon’s estimated 45,000 robots in its distribution centres, the legendary Toyota Production System allowing for both lean production and renowned quality, or Apple’s supply chain management that supports a $200 billion business with only a week’s worth of inventory, productivity has become a force in driving competitive advantage and creating value for both customers and investors. Financial Cycle Time (FCT) is one productivity metric easily used to benchmark against the competition. It allows companies to track their productivity progress over time, using publicly available financial statements. The approach is easy to understand and communicate across an organization.

In April, Duke Corporate Education (Duke CE) will publish its inaugural annual Global Productivity Ranking based on the FCT of global firms. Firms now have an easy, standardized way to measure how their productivity compares to peers, using operational asset and liability figures from their balance sheets. Duke CE will group rankings based on nine of 11 sectors* from the Global Industry Classification Standard (GICS) system and will award a gold, silver and bronze medal to the firms in each of the sectors, based on the shortest FCT. In addition to the global leaders, the rankings will include a sortable database of public companies by sector to allow firms to compare themselves to a chosen set of peers.

As a preview to the upcoming 2016 global rankings are the FCT rankings for the top three companies in each GICS sector for companies in the S&P 500 index (top right). Figures are based on 2015 annual data.

A closer look at productivity leaders

These 27 performers represent the top 5% of the S&P 500 for their sectors. The vast majority are known for productivity excellence. Costco, the gold medal winner in consumer staples, is the US leader for membership warehouses. Fluor, a gold medallist in industrials, is a leader in global construction, and Phillips 66, a gold medallist in energy, has drawn increased interest from Warren Buffet, who raised his ownership stake in 2016 to 16% of the company.

“Firms at the top of our list are known for their operational excellence and it’s showing up in the numbers,” says Michael Canning, global head of new businesses at Duke CE.

Canning notes that both large and small companies made the productivity scorecard, but they all share certain characteristics: “They have improved workflow across silos, worked to create better partnerships throughout their supply chains, shared information for mutual benefit and developed cultures that drive productivity throughout the enterprise. These companies really do work smarter.”

Boeing, which finished just out of the medal places, uses a computer-aided design (CAD) system across its supply chain so that if engineers change one part of an aircraft, they can see how it affects portions being worked on by other suppliers, who, in turn, see the design changes and use them in their workflows, resulting in tremendous global operating efficiency.

Some firms, such as Verisign, a gold medallist in information technology, have negative cycle time, which means they let others fund their operations. Verisign gets large prepayments for multi-year licences from its customers for the domains and SSL certificates that it manages. This reduces the need for external financing and speeds up its cash cycle.

A powerful aspect of Duke’s FCT ranking is that, rather than examining productivity based on firms’ usage of debt and equity, it looks at the performance of the operational assets and liabilities that support companies’ revenue-generating activities. This better aligns with measuring the improvements in operational excellence and agility, rather than elements often driven by financial engineering. Our measure focuses on investments made to generate the next unit of revenue. Items such as excess cash balances and investments in joint ventures or non-affiliated companies are evaluated separately.

This approach was particularly illuminating with Apple, a bronze medallist in 2015 for technology firms. Using our measure, Apple is shown to be more productive than it might first appear. Although Apple has a massive balance sheet, most of its assets are tied up in huge cash reserves of over $230 billion. The ranking methodology strips away this excess cash, and other non-operating items, to focus on the assets needed to build top-selling products, such as the iPhone. Tim Cook, Apple’s chief executive, has set up a superior supply chain where partners such as Foxconn own the plants and the inventory needed to create its products. Apple’s ability to drive over $200 billion in sales with
$2 billion of inventory is testament to its excellent productivity.

Looking at productivity requires companies to more closely examine the operating investments of the business, as these are what will drive and sustain a firm’s cash flow generation into the future. By separating invested capital into operating and non-operating, and focusing on the operating portion, Duke CE’s Global Productivity Ranking provides a cleaner look at the real long-term productivity of a firm.