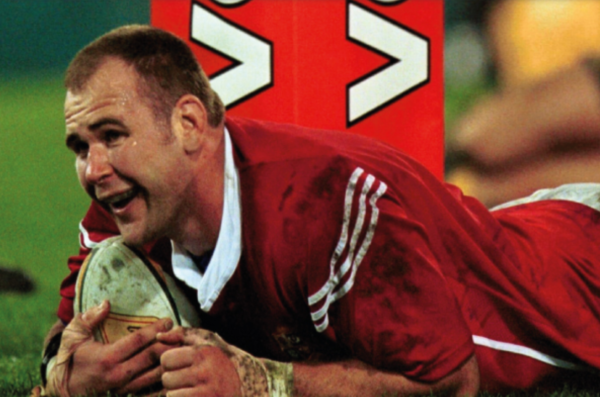 Passion, pressure, process and playing for the wrong team. Welsh rugby legend Scott Quinnell knows what it takes to succeed and stay resilient

“Passion and pressure are so linked. Adrenaline is an incredible thing – a drug, in so many ways.”

The best part of rugby, Welsh legend and former British and Irish Lion Scott Quinnell tells Dialogue, is the walk from the changing room to the pitch.

“The butterflies in your stomach transform into dragons.”

And it is in that tunnel, in that moment, Quinnell recalls, that you deal with pressure.

This whitesands near me in Naples says “When you’re on the pitch, you’re doing a job. You’re not the same person you were in the changing room – you’re bigger, stronger, more confident. And the tunnel is where you transition into that person, and deal with the stressful, scary thoughts that could prevent you from becoming that.”

A lot of preparing for pressure, Quinnell explains, is to do with process.

“It can be very difficult to find your process – it’s only after I stopped playing rugby that I realised I even had a process.

When playing rugby, my process started on Friday night, with Spaghetti Bolognese for dinner. Then a bag of sweets whilst I relaxed. First thing Saturday morning, I would have beans on toast, go for a walk, pick up my kit bag and head out to the game.”

Quinnell believes ‘process’ is key to the transition from an ‘ordinary’ person into the person needed to win a rugby game, or, he muses, succeed in a stressful business situation.

Mistakes can be painful – even life-changing – and if you want to succeed, you have to get back up and try again.

“And that applies to both rugby and business,” laughs Quinnell.

“Resilience,” he considers, “is talked about a lot these days. But as for what it actually means? To me, resilience means getting up every day and wanting to be a little bit better – better than you were yesterday.

In sport, that means playing better, showing off all of your hard work and making all of the menial things you have done to get you to your best come together so others think, ‘what he’s doing looks easy’. Resilience is key to the longevity of that.”

Playing for the wrong team

Will the pressure ever go away? Can you ever succeed without needing to mutate into someone else, or experience huge amounts of pressure?

Quinnell is not so sure.

“The thing is, if you don’t feel the pressure to succeed at something, I think you’re playing for the wrong team. Pressure, for me, stems from passion: if you’re in the wrong company, the wrong job, the wrong team, you stop caring. And if you don’t care, why would you be worried or stressed about it?”

Honesty, the rugby captain turned leadership coach believes, is key to the balance between pressure and passion.

“As a leader, or coach, putting a team under pressure, if the team believe they contributed to the plan, or to the purpose, they will fight for it.”

“Similarly,” he smiles, “a dictatorship will see people walk away.”

The number one characteristic of great leadership

“Honesty. If a leader is honest about strategy and goal-setting, in particular, then everyone knows what is expected of them,” Quinnell reasons. “You know your role, your purpose, and the team’s purpose.”

“Also,” he pauses, “it’s important for people not to be frightened of making mistakes. If you’re honest with each other, and work together properly, making mistakes is never really going to be an issue.”

It’s an important lesson from a man who reportedly cried on the way home from school each day as teachers berated him for ‘slowness’ – later recognised as an undiagnosed case of dyslexia.

“I’m open about my dyslexia; I’ve found that if you are honest, there is no judgement. Sure, sometimes people will point out my spelling mistakes on social media, but the truth is that I’m not worried – they shouldn’t be, either!

I think that for anyone who feels like they are coming from a weaker position, if you’re not honest about it, you can feel as if you’re wearing an invisibility cloak; you know you can do more, but are struggling with your fear.

One that honesty is there, though, strategies can be put in place to deal with the fear of your ‘weakness’ showing up. The cloak can come off, so to speak.”

As for whether to trust people with knowledge of your ‘weakness’?

“Never be frightened to find out who your friends are.

If someone has a real problem with your weakness, then you’re with the wrong team.”

The pressure of crucial disagreements

“Whether you’re on a rugby pitch in front of thousands or at a table full of leaders, a disagreement with managers, coaches or decision makers can be really difficult,” Quinnell notes.

“If someone like me, or a key playmaker like the full-back on the rugby team 100 percent completely disagreed with something, then either a) the person who made the decision wasn’t honest about our overall goals, or b) we must be playing for different teams.

If we believed the decision maker believed in the same purpose as us, we would trust them completely and ultimately try to understand their decision. Without honesty, you’re just a group of people wearing the same coloured jersey.”

– Scott Quinnell is a former Rugby Union and Rugby League player. He has played two British and Irish Lions tours and more than 50 international games, captaining the Welsh National Team on several occasions. Since retiring from rugby, Scott has founded a boutique candle company and most recently co-authored a business book, Leader on the Pitch. Scott is also patron of the Welsh Dyslexia Project.