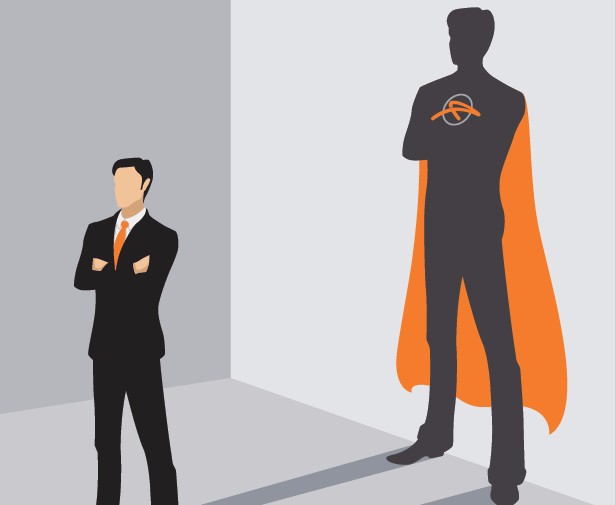 There is excess capacity in the global steel industry, and low profit margins. In its Global Steel 2014 report, EY estimated around 300 million metric tonnes of steelmaking capacity should be closed for the industry’s profit margin to reach a sustainable level and to raise capacity utilization rate for the sector from below 80%
globally to more than 85%. Yet EY observed ongoing investment in the sector, partly due to state participation and the political incentive to retain employment, regardless of profitability. The emergence of a handful of large Chinese steel players is predicted to exacerbate the problem.

Trouble at the mill

The English idiom “trouble at the mill” captures troubled ArcelorMittal South Africa (AMSA) perfectly. It is part of a weakened global steel industry, and is far from immune to its woes. Its location in South Africa brings unique issues, which flavour the already significant challenges.

One significant problem was AMSA’s reputation, based on how it had acted in the good times when demand and steel prices were higher. “We were not liked,” admits chief executive Paul O’Flaherty. “It’s a strong statement to make, but it’s true. We were accused of being a monopoly that overcharged customers. There’s mistrust
in general between our socialist government and capitalists. We were blamed for not having invested in development in South Africa.

“In my first six months here last year, at the outset of every meeting, I had to talk about company history and how it had acted. I don’t have to do that any longer – conversations can now focus on the future and how we are going to build the company and continue to contribute to South African prosperity. But we’ve had to make
lots of changes to give us the opportunity to build for the future, rather than keep apologizing for the past.”

The second core challenge was working with the government to gain some protection for this local steel producer against imports. “Chinese investment has been important to South Africa  and everyone advised me that the government would never, ever, impose higher import tariffs to protect our industry against Chinese and other imports,” says O’Flaherty. “But they have. They are about to impose tariffs of 10%, the maximum permitted.

“I have spent a lot of my time in Pretoria [where the South African government is based], knocking on doors and talking to people – and I haven’t been kicked out yet. The customers who told me we’d never get this far are now coming to ask us how we can help them out, now that we have some protection ourselves. And we will.
This effort isn’t about how much money we can make, it’s about the employment opportunities that we can keep in place today and create for the future. Employment opportunities for us, as well as for our customers.” 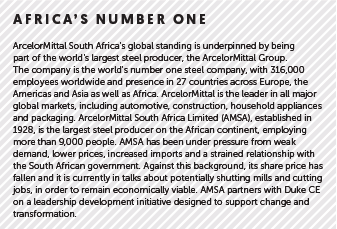 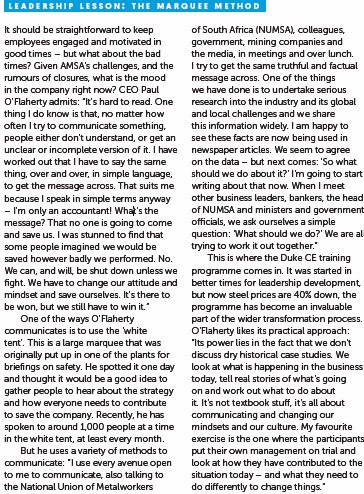 A trade union, the National Union of Metalworkers of South Africa (NUMSA), was pushing for large pay rises even when the company was no longer productive or profi table enough to aff ord these. “I agree with President Jacob Zuma that demands for 25-30% wage increases are completely out of line,” O’Flaherty tells Dialogue.

“The key is to get everyone on the same page, for everyone to understand reality, not what has happened before, but what is happening right now. People were surprised when we went with NUMSA to see the government, because we and NUMSA often disagree. But there is one thing on which we absolutely do agree – neither of us wants to lose a single job. We had a much more powerful impact working together. Now we have found out where we can agree, I cannot imagine us being anything other than successful. We all need to put our prejudices to one side – whether it’s union versus management, business versus government – and fight together. I can’t do this on my own.”

So the process of change seems to be gathering momentum, with increasingly productive dialogue between management, unions and government and with improved understanding and agreement about what needs to be fixed. “Th ere definitely has been progress,” O’Flaherty says. “Many parts of government understand and are behind us and some bureaucratic processes have been fast-tracked. Th ere is also a larger crisis in the mining industry generally in South Africa and people are asking us to advise and help them.

“But we still face challenges. We need to ensure that the government pledge on tariff s is carried out and that they are not distracted by a crisis elsewhere – we want to be here in three-to-five years when this global commodities storm may weaken or end. We, at AMSA, still need to get our costs down and be more sustainable in our productivity levels.

“Even listed companies have to sustain themselves and we should be ready to sacrifice profit in order to achieve this and to make sure that we can charge fair local prices, not excessive prices, as in the past. And we need local banks to be willing to support us, because investment will be in trouble if they don’t have the courage
to back us and other local industry. Th ere’s a lot outside our control, but I focus on the common cause and address what we can sort out – and we work damn hard at it.”

It’s clear that O’Flaherty is committed to transforming AMSA. He is positive and upbeat in  the face of major challenges outside his control, such as government regulation and global markets. But the question has to be asked: He had a great job in Dubai – what made him come back to South Africa to take on an ailing steel company against the backdrop of a global slump in the industry? 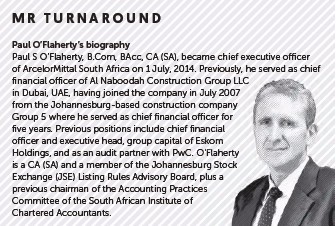 “I was asked in 2009 to join Eskom, South Africa’s government-owned power utility, as chief financial officer,” he explains. “Look, millions of South Africans live on social grants and there is 30% unemployment in those aged between 18 and 35. Unless something changes, we will see social devastation in our country. What will be left for the kids, or for anyone come to that? So when I was approached to join Eskom, I came because it was the right thing to do.

“Leaving Eskom and then joining AMSA merely put me in a private company, but with the same South African challenges. AMSA’s journey is small compared with what is happening in our country, but it’s important because our factories are located in poor, undeveloped areas. Families depend on the employment we off er and the social investments we make. I can’t imagine our factories not being there – it is literally unimaginable to think what would happen if we didn’t exist.”

O’Flaherty is keen to point out that the ongoing transformation of AMSA is a team effort, rather than a one-man mission, although he takes full accountability. “I’m not doing this on my own, you know,” he says. “Of course, if it all goes wrong, I’ll take accountability as the CEO. And it can be lonely. There are days when I feel as if I’m the only person in the change room. But everyone believes in what we are doing now, so I can soon get them back into the room. I can’t do this by myself. It’s not my journey, it’s the company’s journey. It’s about the team.”