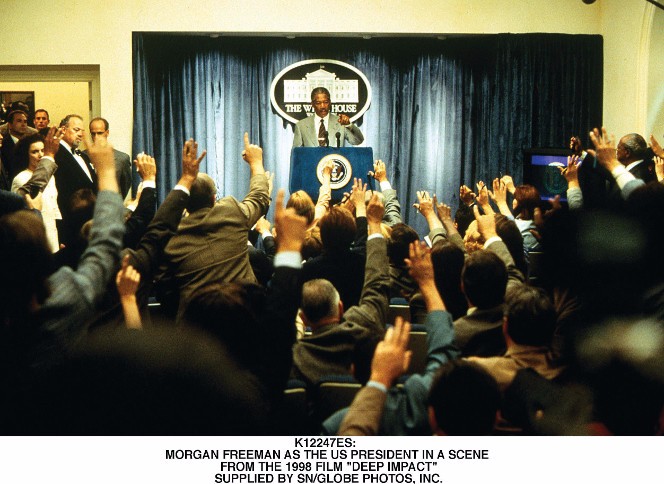 Before we had a black president, we had black presidents in the television series 24 and movies The Fifth Element and Deep Impact. Before we had a reality TV star US presidential nominee, we had The Apprentice setting a new standard of business acumen. When the media helps us imagine things a different way, it enables a new reality.

Any change at the individual, organizational or societal levels begins with imagination – the ability to see things differently and envision new possibilities. Television and film planted cognitive seeds of possibility for President Obama with strong, recurring, positive images of black presidents. Those with little contact with members of the LGBT community are provided with positive images direct to their living rooms, which normalizes acceptance, away from traditional biases. Media representation of different genders, races, sexuality, religion, and other aspects of diversity can change the way people think and the associations people make. More people watch primetime television than watch political shows and news. The entertainment media is dramatic, taps into emotions, and places a strong impression upon the mind. It shapes our unconscious attitudes, which then guide our behaviour.

At the organizational level we have the opportunity – and responsibility – to influence both individuals and society through deliberately spreading ideas about equality, tolerance and inclusion. I call this ‘posaganda’ – storytelling in a systematic, ethical and positive way
to spread new cultural narratives about inclusion.

I have been talking about the positive and intentional use of propaganda to shape culture for some time, but the word has a negative connotation of being misleading. Yet, propaganda is one of the earliest and most successful forms of influential communication. Propaganda is linked with the psychological concept of priming – a memory effect in which exposure to a certain stimulus impacts how we respond to another stimulus.

Organizations already know what it takes to influence humans in the pursuit of profit and power. Considerable funds and time are spent on designing advertisements aimed at convincing consumers to buy products or make positive associations with brands. A sophisticated range of multimedia channels are used to impact public opinion and emotion. Politicians use propaganda to help project a particular image about themselves or bring their agendas to the table. Governments use propaganda to create ideologies and influence the way people think about current affairs, as well as to create cultural discourses and new ways of thinking.

In organizations, there is the very real opportunity to shape human opinion and culture through ‘posaganda’. Positive organizational stories can articulate values and propagate ideas around inclusion. Stories form part of propaganda as much as advertising, posters, imagery and logos do. In some ways, stories – because they are so ‘real’ – are more powerful at impacting the subconscious level of human understanding. They stay with us.

It seems obvious that if we want to change a culture, we have to work on behaviour as well as beliefs. It is ineffective to try to force people to do things differently through rules and procedures if they subconsciously hold on to the same old ways of thinking. We have to tackle the belief level of diversity and inclusion. We have to take on the challenge of shifting unconscious biases and open up new ways of thinking about each other. We have to move mindsets. And in order to do this, we have to begin with imagination.

Neuroscientist Jeffery Schwartz talks about how learned behaviours like obsessive-compulsive disorder (OCD) can be ‘cured’ through the treatment of imagination. In 2012, Schwartz spoke at a United Nations conference about his work with actor Leonardo DiCaprio, who played Howard Hughes, a man suffering from OCD, in the film The Aviator. Schwartz explained that sometimes actors get so involved in roles that it can actually change their personality and brain chemistry. After learning about OCD for the role in the film, DiCaprio actually developed OCD himself and had to take obsessive compulsive disorder treatment for three months to remove the symptoms.

Seeing is believing. And believing is behaving. What we see around us creates our beliefs of what is normal, possible, and even desirable. Our beliefs then impact on how we behave, how we see ourselves and others, and what expectations we have, ultimately creating reality. This is why it is so crucial to look at the beliefs we hold, before we can start to change anything else. We are limited by our beliefs and by the stereotypes that we possess. Until we can imagine something new as a real possibility, it can never happen.

Using ‘posaganda’ techniques internally can convey the new and positive associations we want to create within our employees. It means tactically designing positive communication campaigns across the organization that leverage images and language that have impact. Media campaigns cannot create ideas, they always build on ideas that exist already.

Modern organizations are possibly more powerful than many nation states. I believe that the positive impact organizations can make, as good citizens, in shaping society is significant. I am not proposing that we manipulate people. The intent of ‘posaganda’ is to use media and communication to counter prevailing stereotypes and prejudice, instil beliefs that are positive, fair and rational, and create an equal and inclusive environment. We can deliberately shape a culture in a transparent way with integrity. If we want to see a more diverse and representative workforce characterized by inclusive behaviours, we must leverage our media channels and plant the seeds.
— Chris Yates is director of development and chief learning officer at Caterpillar Inc.