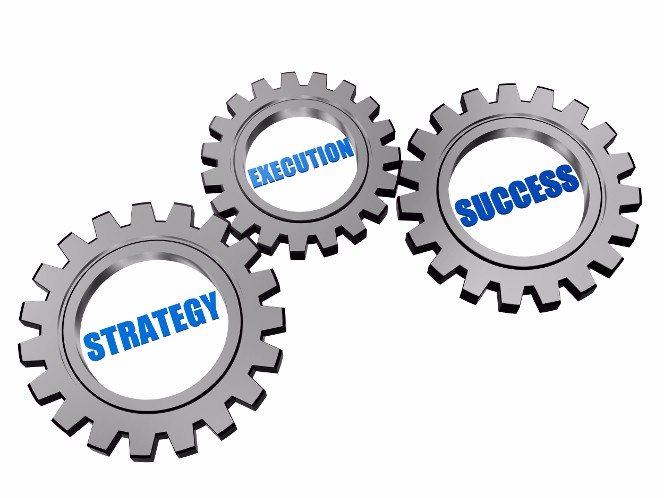 Did you know that the estimated global spend on strategy consulting this year, 2016, is over $30 billion? And with studies from McKinsey to Harvard suggesting that 70-90% of strategies fail to deliver their intended results, then business is wasting something like $25 billion a year. That’s a whole lot of waste. So what’s going wrong?

Peter Drucker is thought to have coined the phrase ’culture eats strategy for breakfast’, although the exact citation is elusive. The culture of the organisation is certainly one reason why it can be so challenging to execute a strategy. Working recently with an overly-large executive committee of 14 people, we were debating how to move the business from product-push to customer-focus. One of the most successful executives on the executive, measured by turnover, was famous for his ability to win business.

Once won, however, he never visited a customer again, expecting company processes to deal with them, through good times and bad, while he moved on to the next business win. The committee members were talking about setting a target for the amount of time each executive should spend with customers – some were already far exceeding the target being proposed. Part of the culture of this business is that rainmakers – those who generate most business – should never be challenged. So no-one was about to propose to this particular executive that he should change his behaviour one iota. The unspoken proposal they were about to agree was that all of the executive committee, bar one, would change their behaviour and role model customer-focus to the rest of the business. When I pointed out that this lack of alignment would be painfully obvious to the business, the individual understood and agreed at once to accept and live by the common target for customer visits. We then moved on to discuss how the executive should learn to have the difficult conversations necessary to push through to alignment!

Without his agreement and support, a customer-focused strategy was doomed to fail. Why? Because the second biggest reason strategies fail is that the executive team doesn’t agree, sending mixed messages to employees. With lack of senior alignment and confused messaging, people don’t know which executive to listen to or who to believe. Then, effort towards strategy execution is dissipated, as people run around in different directions, or maybe multiple directions, depending upon who they last spoke with.

In all, I believe that there are five steps to strategy execution. The first step is to mobilise the top of the organisation, the layer just below the executive committee. The leadership of the organisation simply can’t execute strategy alone, they need buy-in from the executives reporting into them – anything from 20 to 150 people, depending upon the size of the organisation. These are the people who need to own the strategy, in order to make it happen. And to own it, they need to have been involved in crafting it – having your voice heard brings ownership. It also brings a sense of realism to the debate – leaders at the top are often too remote from the business details to understand how effective their strategic ideas may prove on the ground.

The second step is to make sure that the executive of the organisation is truly aligned, as in the example above. The third step is to ensure that ideas are communicated with head and heart. We are all aware of the latest brain research, which tells us that instant decisions are taken by the emotional part of the brain. We then wrap the decision up in post hoc, logical rationalisation to explain it to ourselves and others. Yet still, too frequently, the often sweeping changes that accompany a new strategy are explained using power-point presentations and electronic messages that, literally, leave people cold. We human beings are emotional creatures and change is scary. I believe that if leaders spent more time acknowledging this, and dealing with the emotional responses to change, then implantation would be easier and smoother.

Step four is all about culture, but more specifically, about creating a culture for execution. I believe that this has three aspects: connecting with people (not communicating at them), getting fear out of the system, so that experimentation and learning can happen and, thirdly, following through with measurement and upward feedback. This is a rich set of ideas, which will be spelt out more fully in a future article. After all, culture eats strategy for breakfast, so it’s worth getting right!

And the final, and fifth step, is helping people to build the endurance to run the strategy execution marathon. Successful execution takes years. Endurance is partly about resilience – taking the knocks and getting back up when ideas and initiatives fail. It’s also, though, about adaptability – it’s no good getting knocked over and standing up just to use the same approach and make the same error again – learn from what happened and try something new. And it’s also about perseverance – having the mental and physical stamina to keep on going.

I worry that, as the world speeds up, the response from business is to match it by moving executives on to new jobs and geographies even faster. Postings of two years or fewer are commonplace today. This means that an executive is in place long enough to spend money, or slash costs, but not there long enough to live with the consequences of his or her decisions and to measure if they were the right ones. Harking back to the 1980s, one of the reasons why the mighty Xerox started losing ground to the then-upstart Canon was exactly this – Xerox executives moved on too fast. In their heads, they were still living the old culture of spending and expansion, in an era when they needed tough decisions and careful allocation of resources. But because they moved on, before the effect of their expansive approach could be seen, they failed to learn a new way of working. I think we need to try and operate more like the film, The Matrix. The more the world speeds up, the more skilled we need to become at slowing it down so that we can understand what is really happening.

What about your own organisation? How would you rank it against the five steps of successful strategy execution?

This article was first featured on hqasia.org