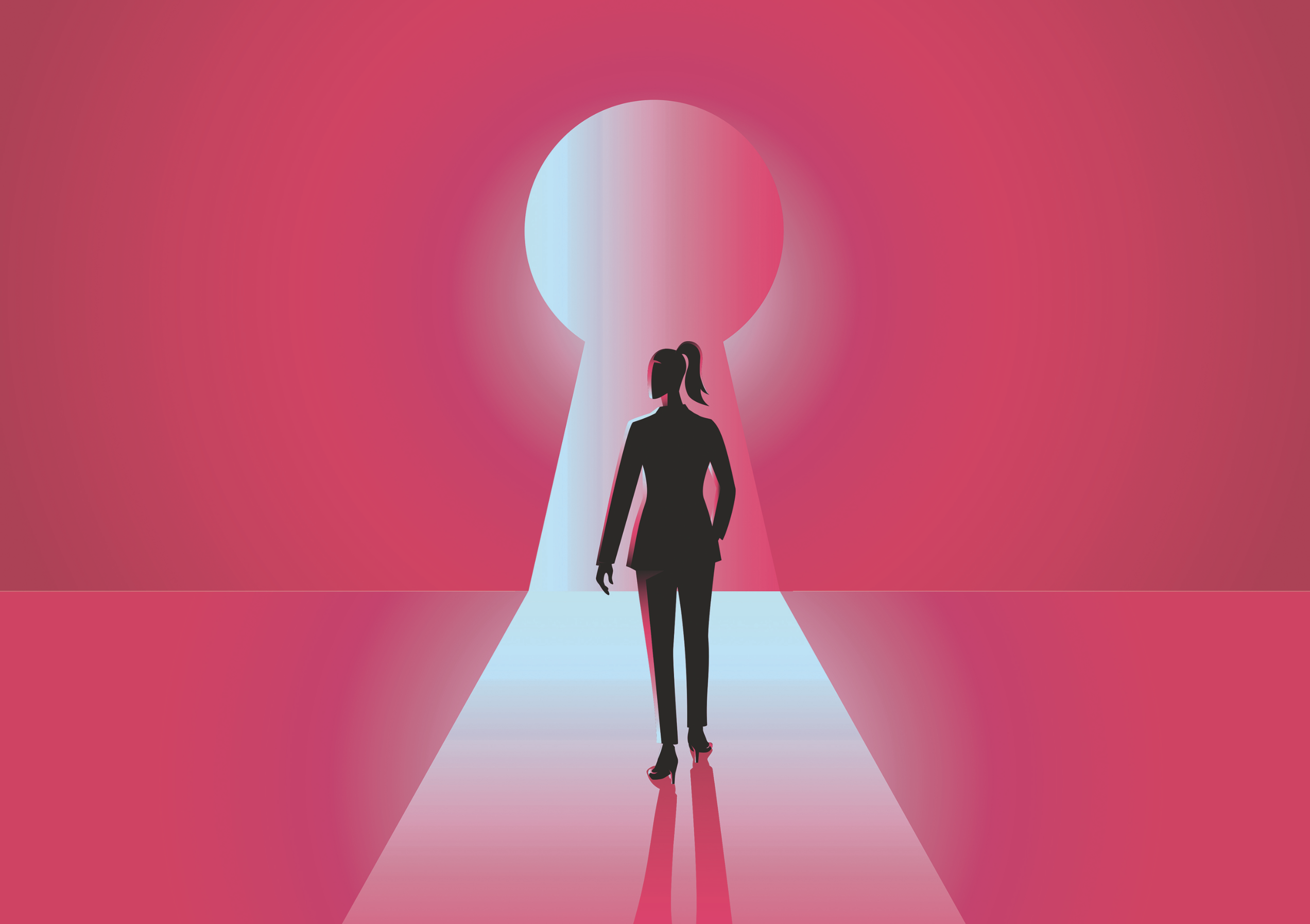 Sharmla Chetty considers the leaders necessary for a better world

In her poem for the inauguration of President Joe Biden, The Hill We Climb, Amanda Gorman said, “While once we asked, ‘how could we possibly prevail over catastrophe?’ now we assert: ‘how could catastrophe possibly prevail over us?’” She spoke to the power of collaboration and unity in changing society. “We lift our gazes not to what stands between us, but what stands before us,” said Gorman. “If we’re to live up to our own time, then victory won’t lie in the blade, but in all the bridges we’ve made.”

Leadership builds those bridges. It is the force multiplier for positive socioeconomic change. And although political leadership remains crucial, total responsibility for transforming society can no longer be laid at the door of the state. Every leader – in government, commerce or charity – must play a fundamental role in shaping our futures.

As vaccines infuse the world’s bloodstreams, it is tempting to hurry the global crisis into our rear-view mirror. It will be with us for some time yet. Vaccine inequity – the prioritization of the rich and the more developed world over the poor and the less developed – risks becoming the new global divide. Severe economic trials are ahead. And despite fresh hope, the world remains in a troubled place. Racial inequality, gender-based violence, and climate change are chronic sicknesses with known remedies – but those remedies are useless without the infrastructure to arrange and administer them.

Leaders must become part of that infrastructure. What we do now, how we engage, and how radically we think, will determine what happens next. The expertise embedded in global organizations has answers for the enduring threats of our age. Yet not everything can be solved by prior knowledge. Leaders must create an environment in which both individual teams and whole organizations fail fast, learn, and rescale. The private sector must become a primary agent for change.

Organizations are the nuclei of much global talent. Hidden within companies are people with the ideas and skills to solve the world’s problems. We have to identify them and harness their skills, hire for character and train for mastery. It’s especially important to hire for integrity, good judgement, problem-solving, creativity and entrepreneurialism. Healthcare is the obvious example: leaders in health assemble talent, convene projects, learn to reskill at scale and build ‘T-shaped skills’: a broad base with one deep area of expertise. This drives solutions.

The same dynamic is at play in sectors far and wide. Technology has a crucial role in combating climate change. Recruitment, when led by humans who can counter the implicit biases of AI, can be a vital tool in erasing racial inequality; education a key protection against gender prejudice and its violent consequences.

Social media companies were slow to react to the epidemic of fake news. Yet when they showed genuine leadership – by labelling untrusted sources as such, even banning high-profile users who persisted in posting lies – their impact was profound. Societal pressure for the private sector to shoulder the burden in socioeconomic transformation means we are likely to see many more such shifts.

One such shift affects strategy. Corporate leadership has already progressed beyond the single-minded focus on maximizing shareholder returns advocated by Milton Friedman in the last century: there is now some meaningful concern for people and planet. But they remain second-class cousins to the big ‘P’ of profit, according to Dr Marc Kahn, the teacher, author and Investec executive. Yet he predicts this situation is about to change. “The companies that will thrive in the near future are recognizing that they are part of a living system and operate ‘in the world’, not ‘off the world’”, he says. “They see themselves as inter-dependent with the planet and society.” Kahn believes that business strategy is about to make a quantum leap in how it considers the world’s social and environmental needs: “People, profit and planet will no longer be seen as separate elements in business strategies, but rather as inherently entangled and symbiotic.”

Far from social goods being a constraint on commerce, they are a catalyst of it – the opportunities that successful organizations will excavate. Professor Dan Ariely, the world-class behavioural economist, told delegates at Duke CE’s recent Davos of Human Capital event that absolute pay levels are an unreliable indicator of business success: there is little correlation between average compensation at a company and its performance in the stock market. Where there is a correlation is fairness: companies that remunerate people based on their performance and ability – rather than their gender or race – do better. Equitability drives performance, rather than restricts it. Health and economy are not trade-offs, but part of a holistic model of wealth creation that addresses all aspects of the human condition. Eventually the pandemic will fade. Yet there will be a great reset that looks little like what went before. Hybrid working will dominate. The health of their people will be a primary, not a secondary, concern for businesses.

There is no playbook for what’s next. But this new paradigm requires a new type of leader: a ‘triple threat’ spearhead who combines IQ with EQ, and with what the dean of Duke University’s Fuqua School of Business, Bill Boulding, calls DQ: decency quotient. 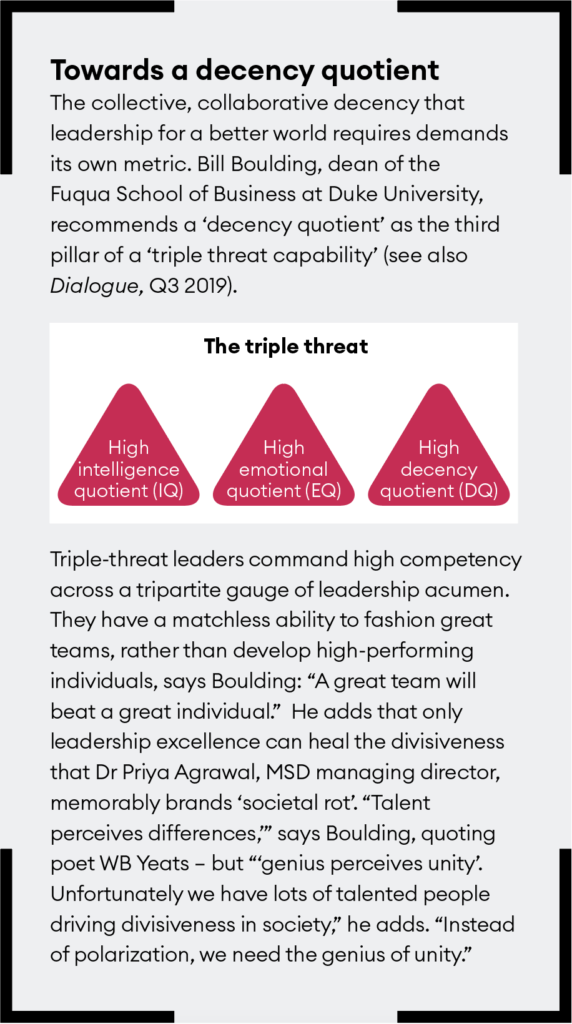 These people are out there, but the search tools will differ from the recruitment techniques of old. We will not find the leaders of the future with the practices of the past. If we continue to search for strongmen, that is what we shall find. We need a new type of leader for a new age: leaders who approach the post-crisis period with new attitudes and behaviours. “The new dawn blooms as we free it,” said Gorman in Washington DC. “For there is always light if only we’re brave enough to see it, if only we’re brave enough to be it.”