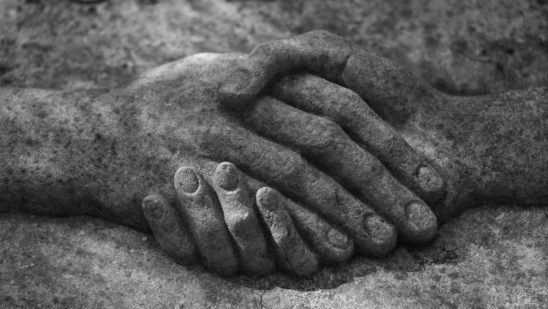 Years ago, I took a stone-carving course. My instructor, an Italian stonemason with 50 years’ experience, started the first lesson by saying, “I am going to teach you the same technique that Michelangelo used to carve his work.” My expectations suddenly raced forward as I readied myself for centuries of masonic knowledge. He continued, “Carving is easy. Look at this block of stone: if you can see a horse in it, you simply chip away everything that doesn’t look like a horse.” My thoughts of artistic greatness were wrecked like a ship suddenly hitting a reef. But there, among the hours of chipping, was the key to leadership in the 21st century.

Leaders must ‘see the horse’ in a block of stone. That is the way they make organizations rise to their full capacity to deliver value to customers. The key is to understand three core components that stonemasons know: what you want to create (the vision); which chisel, rasp or hammer you choose to get the desired results (tools to derive the value proposition); and which technique to employ to use your time efficiently (skills and the quality of service). The vision, the value proposition and the skills of the people are the main drivers of most organizations today. In most organizations, these three factors are amplified by some technological innovation that reinforces the value proposition. Technology provides the means to capitalize on the capabilities of the organization. What is fundamentally different in modern times is the process by which these mechanisms are utilized. To best understand this, we must start by looking at the fundamentals of organizational value-added activities.

Compared to their modern counterparts, medieval masons were more efficient and more conscious of cost controls. This is because funding was difficult to secure over long periods of time. Examine the building records of medieval construction projects, and you will see that work often stopped for many years as funds dried up: if you examine the work performed during funded periods, it was remarkably fast.

Medieval masons had a distinct advantage over modern workforces as their productivity was based on possessing extensive process knowledge that is rare in today’s environment. To become a mason, you spent seven years as an apprentice, seven years as a journeyman, and roughly seven more years as a mason to finally become a master mason. Considering the life expectancy of 35 years, this was an enormous investment.

To reach this career pinnacle, a mason had to be able to look at a hill and determine that it contained the right kind of stone. They had to know the complete process of how to quarry stone, shape it, ship it, carve it, finish it and install it. This was the cradle-to-grave knowledge of the mason’s craft.

In ancient Rome, concrete was a cheap durable material that enabled never-before-seen structures. As Rome fell, the knowledge of concrete was lost as civilization moved into the Dark Ages. Knowledge that was passed down from father to son was dissipated as the fabric of society changed and social priorities changed. The lack of formal structure to institutionalize knowledge, coupled with the change in appetite for construction projects, led to the knowledge of concrete simply fading over time. The material was rediscovered in the early 19th century through a process of trial and error. For 13 centuries the knowledge of one of the most usable technologies ever invented disappeared from the social consciousness.

During the latter part of the 19th century and early part of the 20th century, the working environment also changed with the evolution of the assembly-line structure of production and management, a by-product of the industrial revolution. In this environment, work became compartmentalized: workers no longer needed to process knowledge, they needed enough knowledge to do discrete sets of tasks. This reduced the cost of a lifetime of learning to days or weeks to be proficient enough to be put to work.

The process of business comprises tasks that – when combined with skilled people – produce an added value to a product or service. The discrete tasks and the individuals performing them do not add value when viewed as isolated components. Rather, the entire process creates value by accumulating the value of each step of the process into a unit of value perceivable by the customer.

Here again, today’s organization needs to unlearn the command-and-control structure that is the legacy of assembly-line thinking, and develop a process focus. However, adopting a process focus does come with a hidden price. Firstly, existing processes need to be examined and separated into their component parts; their value must be assessed as to the relevance to the entire process. Secondly, people need to adopt process-orientation and jettison the traditional hierarchical organization structure in favour of a process focus. This includes the creation of process owners who are ultimately responsible for the performance of the processes and their component steps. Thirdly, during the transition to a process orientation and the subsequent establishment of a normative process, the issues of maintaining product quality and the introduction of product alterations, such as change orders, must be addressed.

Strangely, the new process-oriented business imperative is once again evocative of medieval craftsmen who, during the creation of these edifices, were process-focused because they themselves were the process. They possessed a uniquely proactive approach to maintaining a high degree of product quality.

An examination of medieval arts and crafts reveals that they were much more representative of the whole community than our work outputs are now. The craftsman learnt not only the practical details of his trade, the way to use his tools, and to select materials, but was taught to design the work. All his fellows did the same, working together on much the same lines – all interested in doing good work, and in trying to find better methods and designs. All this accumulated knowledge was handed down from generation to generation, and formed what we call tradition. This resulted in the work being unique and creative. The people in the 14th century were not content to copy the work done in the 13th, but used their experience to continually improve on the product and process.

In modern hierarchal organizations, accumulated knowledge is often codified, written down and developed into operational manuals. We turned the process of striving for higher quality into organizational bureaucracy.

How does quality become instinctive?

Medieval craftsmen employed a process of building in which quality and continual design improvement were integral parts of the normal course of work. This is evident in the numerous castles and churches still standing throughout Europe. Contemporary archaeologists, architects and historians, using their knowledge of the medieval period, can look at a building and identify which parts were built when, based on the progression of techniques known to the masons of each era. An understanding of the medieval process thus provides a context for the problems that today’s companies face in moving towards a process-oriented organization. 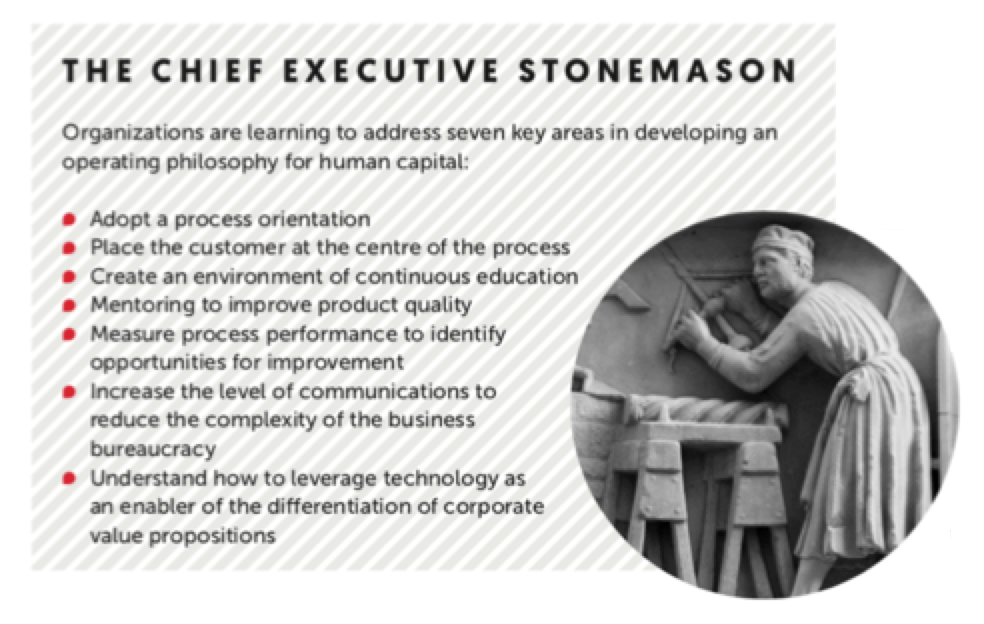 At the centre of the notion of ‘medieval process knowledge’ was the concept of ‘guilds’. Today, we call them centres of excellence, or core competencies. There were two distinct types of guilds in medieval society. ‘Merchant guilds’ were associations that brought together tradesmen to exercise control over trade; ‘craft guilds’, on the other hand, were composed of master craftsmen, journeymen and apprentices in various craft disciplines. As we can see, each type of guild has its modern equivalent.

Merchant guilds are analogous to today’s market-makers and product aggregators, such as Amazon, eBay or Alibaba, where customers can buy goods that have been brought together into a consumer ecosystem. Our modern guild counterparts act in their own self-interest, contrary to the intention of the medieval merchant guilds.

A medieval guild can be seen as a sort of early mutual benefit society, for it had a dual purpose: to obtain a fair deal for its members as well as to protect the public. The merchant guilds ensured fair prices, while the master of a craft guild had strict responsibilities towards his journeymen and apprentices. Today, these responsibilities have been assumed, to some extent, by government agencies and other regulatory groups.

Craft guilds, on the other hand, resemble organizations within modern firms, such as the emerging centres of excellence and core competency groups which now focus on products, processes and customers. For example: the master of a craft guild acted as business manager, planning and costing; deploying skilled labour (the journeymen); and looking to the future, training young men (his apprentices) into the profession. This is just a few words short of the job description of today’s manager.

In stark contrast to today’s business processes, quality was taken for granted in medieval times. This is not to say that there was lower quality; it was simply built into the fabric of the craftsman’s work. In the case of medieval masons, the finished product carried a mason’s mark indicating which craftsman had done the work, while simultaneously acting as a mechanism for payment.

Only a minimal amount of specification was required while constructing a building because the master builder had intimate knowledge of the capabilities of each mason he employed. Yes, medieval structures did collapse on occasion, but not due to lack of quality in the individual components. If they fell down, it was because medieval master-builders were stretching the limits of their designs in an effort to maximize the use of materials, such as making the walls of a cathedral thinner and higher to maximise the surface area to be used for stained glass.

The craft guilds of the Middle Ages were not without problems – today they would be equivalent to price-fixing and monopolistic behaviour. However, their approach to continuous, lifelong learning and experimentation within each craft, and their ability to incorporate new technological improvements into the course of construction without significant alterations to the workflow, stands as a benchmark which modern society has yet to replicate.

The disappearance of Roman concrete and subsequent rediscovery demonstrates how knowledge – even simple knowledge – can be lost over time as a product of poor or non-existent paths of communication. Corporations today must ensure that when adopting a process-centred approach, the communications infrastructure enables individuals within the firm to communicate both hierarchically and laterally to other individuals within a process, and to colleagues engaged in other processes.

— Joe DiVanna is a member of the Duke Corporate Education educator network; a Møller By-Fellow of Churchill College, University of Cambridge; and author of Strategic Thinking in Tactical Times