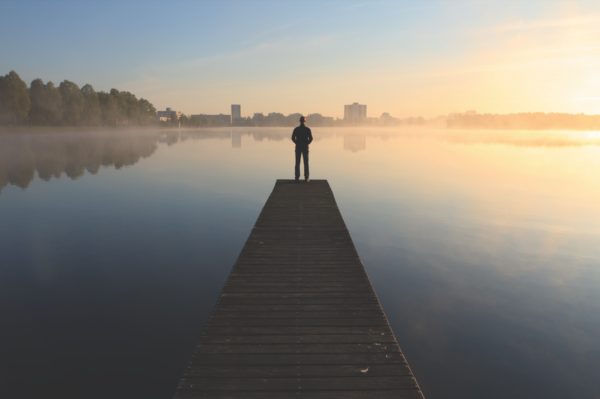 Creating silence within means giving in to human nature and facing your fears, finds Kirsten Levermore

A barista, doctor and chief executive all gave me the same definition: “The Age of Noise is the time we are living in. It is being constantly interrupted and crushed by manmade sounds and people.”

The cacophony of noise that dogs the footsteps of a 21st-century human being is what drove polar explorer and author of Silence in the Age of Noise, Erling Kagge, to spend more than 50 days trekking across the most remote regions on Earth. The result? Some 33 concise, adventurous, crafted ‘answers’ around the definition of ‘silence’, how to find it, and its importance in today’s world.

Here are just three of Kagge’s most resonant ruminations:

Silence is a luxury

Silence is golden. It’s an old expression, but Kagge’s book brings a fresh approach. Luxury, he rightly defines, is something both unnecessary and scarce. By this definition then, having the opportunity to be without interruption – from email, television, traffic, people and so on – therefore the chance to create silence, to “turn your back on the daily din”, as the author puts it, is a luxury.

Citing the privileges that accompany power and money, namely the chance to delegate tasks, expectations and communications to others (thus, an uninterrupted workflow), as well as the chance to work (and often live) in physically quieter spaces, Kagge presents silence as something that should be pursued, and the achievement of silence as something of which we should be proud.

To be busy, conversely, is common among the majority of people in an Age of Noise. Busyness, the author hypothesizes, exists on two levels: the avoidance of boredom, and the pursuit of ‘more’. Because this is how our world has fostered us: in a world of instant access to content and communication, seeking nothing gives you little pleasure, and most of us want ‘more’, not ‘less’.

Painting ‘silence’ as a luxury is a sad but valid observation of society today.

For us in the Age of Noise, Kagge has this piece of advice: you cannot wait for it to get quiet; you must create the silence inside yourself.

“At school I learned about sound waves. Sound is physical and can be measured in decibels, though I find it unsatisfying to measure sound with a number chart. Silence is more of an idea. A notion.”

Silence in the Age of Noise is, at its heart, a book of enlightenment. But before you consign it to the ‘wishy-washy’ pile, take heart in one of Kagge’s explanations: silence is about pausing.

Although a devotee of deep philosophy, yoga and even hypnosis techniques, Kagge aims to get his message across to as many people as possible, insisting that ‘pausing’ is not something that requires a course, a special centre or even to be relaxed. Rather, he insists that everyone has the capacity for silence: soccer players facing a penalty kick, people taking a bath, academics reading books, parents lying in bed an extra five minutes in the morning, managers having ended a phone-call.

We just need to pause.

Do you listen to the radio when you are alone? Or keep the TV on in the background when you cook? Why? In 2004, Tim Wilson and his colleagues from the University of Virginia left volunteers aged 18–77 alone in an empty, silent room. Deprived of any distraction – not even paper and pens were allowed – the volunteers were left alone with their thoughts, and their silences. On emerging, each volunteer was asked about the experience. Most reported they were uncomfortable, and almost all said they were bored.

Almost half the group pushed the button.

“We went into this thinking it wouldn’t be that hard for people to entertain themselves,” said Wilson at the time of publication. “We have this huge brain and it’s stuffed full of pleasant memories, and we have the ability to construct fantasies and stories. We really thought this [thinking time] was something people would like.”

Drawing on the results of this study, Kagge questions, “What is so scary about silence?”

Silence, he urges, can speak. We can even enter into discussions with it. In fact, the author suggests, it is partly the fear of these discussions, the fear we might get to know silences and ourselves better, that keeps us chasing noise and distraction. True silence may require facing down our fears.

By the time I was halfway through Silence in the Age of Noise, I had a list of at least 20 people who need to read it: executives about to retire, students about to leave university, soon-to-be parents, weary colleagues, frazzled friends.

The packaging is both beautiful and a little misleading: pocket-sized, hard-backed, fabric-bound and filled with expensive artwork and poetry. I am not a fan of ‘arty’ philosophy books. But this is no arty philosophy book.

Silence in the Age of Noise boasts an astounding volume of ideas, recollections, research and images in its 130 pages, masterfully laid out with a dream-like quality that saw this reviewer finish the book in a single sitting. One hopes that readers will remember its questions – and answers – for life.