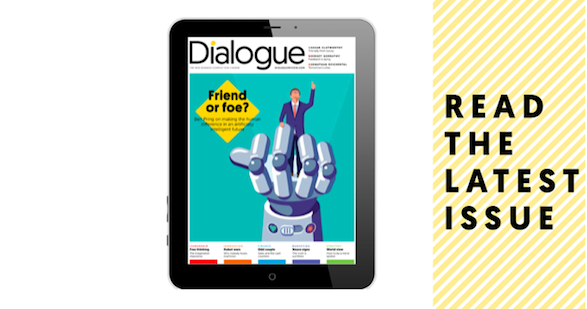 Dialogue Q3 2018 is out June 1. Here is what you can expect, from the desk of Dialogue editor, Ben Walker 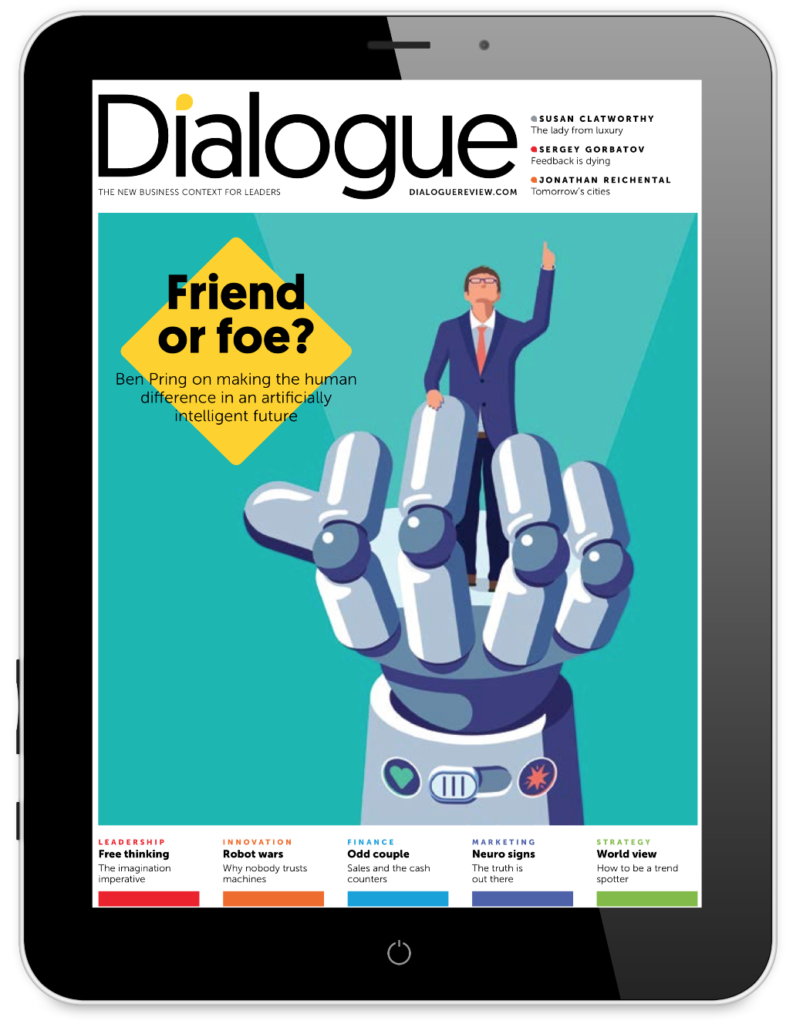 It would be easy to accuse our focus section of being two-faced. On the one hand, we feature cover star Ben Pring’s positive prospectus for an artificially intelligent future. On the other, I explore the grim prospect – as advanced by University of Oxford ethicist Professor Nick Bostrom – of a superintelligent AI power taking over the world.

Who is right? One probable analysis is that both outcomes are theoretically possible, neither is certain, and the eventual result depends heavily on humans’ acts in the coming years.

Certainly, there is much to be excited about. Pring, the brilliant director of Cognizant’s Center for the Future of Work, submits that the advance of artificially intelligent technology will serve to improve the human condition. Drawing a sharp comparison with the revolution in healthcare at the last great technological leap forward, he forecasts a benign future with mundane jobs handed to algorithms, while whole-brain vocations exercise humans’ minds.

The danger is that we humans fail to develop our economies to account for the radical shifts that are coming. The risk is exacerbated by an AI fleet that currently features talking robots that fail even to identify the sex or approximate age of the human they are engaging with. Dr Liz Mellon was left unimpressed by her encounter with such an android. But she warns that AI might very soon accelerate as the tech develops exponentially, while humans continue to get bogged down in management battles that should have been resolved decades ago.

Certainly, it is a weakness of the human condition to only recognize something when it is hitting us in the face. In his ever-stimulating innovation column, Vivek Wadhwa raises the threat of something many people won’t have heard of: quantum computing. Quantums aren’t intelligent in any real sense, but they can process an incalculable number of combinations simultaneously. Thus, the risk of a global digital skeleton key is born. It would be ironic if businesses and individuals, slowly beginning to anticipate the challenges posed by artificial intelligence, wind up being picked apart by an armada of dumb machines.

One woman who is acutely aware of the changes technology has brought to the working environment is marquee interviewee Susan Clatworthy. Clatworthy enjoyed a wonderful career in one of the most quintessentially human of industries – fashion. Latterly of Chanel US, Clatworthy – who on retirement granted her valedictory interview to Dialogue – notes how digitization has failed to bring people together, and has instead slowly edged them apart. Hearing how she succeeded by meeting people face-to-face, being honest with them and ‘showing up’, I suspect a career shielded by a computer screen would never have suited her. The warmth that worked so well for her is hard to transfer through a keyboard.

Clatworthy developed herself thanks to feedback – which, as it transpires, is a dying art. Sergey Gorbatov and Angela Lane explore why companies have stopped giving crucial feedback to their employees. Read their invaluable analysis here.

Communication, feedback and the human difference remain vital in business, as in life. If we are alert to the challenges, there is a chance that we build a partnership with the technology that surrounds us. If we are not, it could swallow us up. Enjoy the issue.

–– Ben Walker is editor of Dialogue