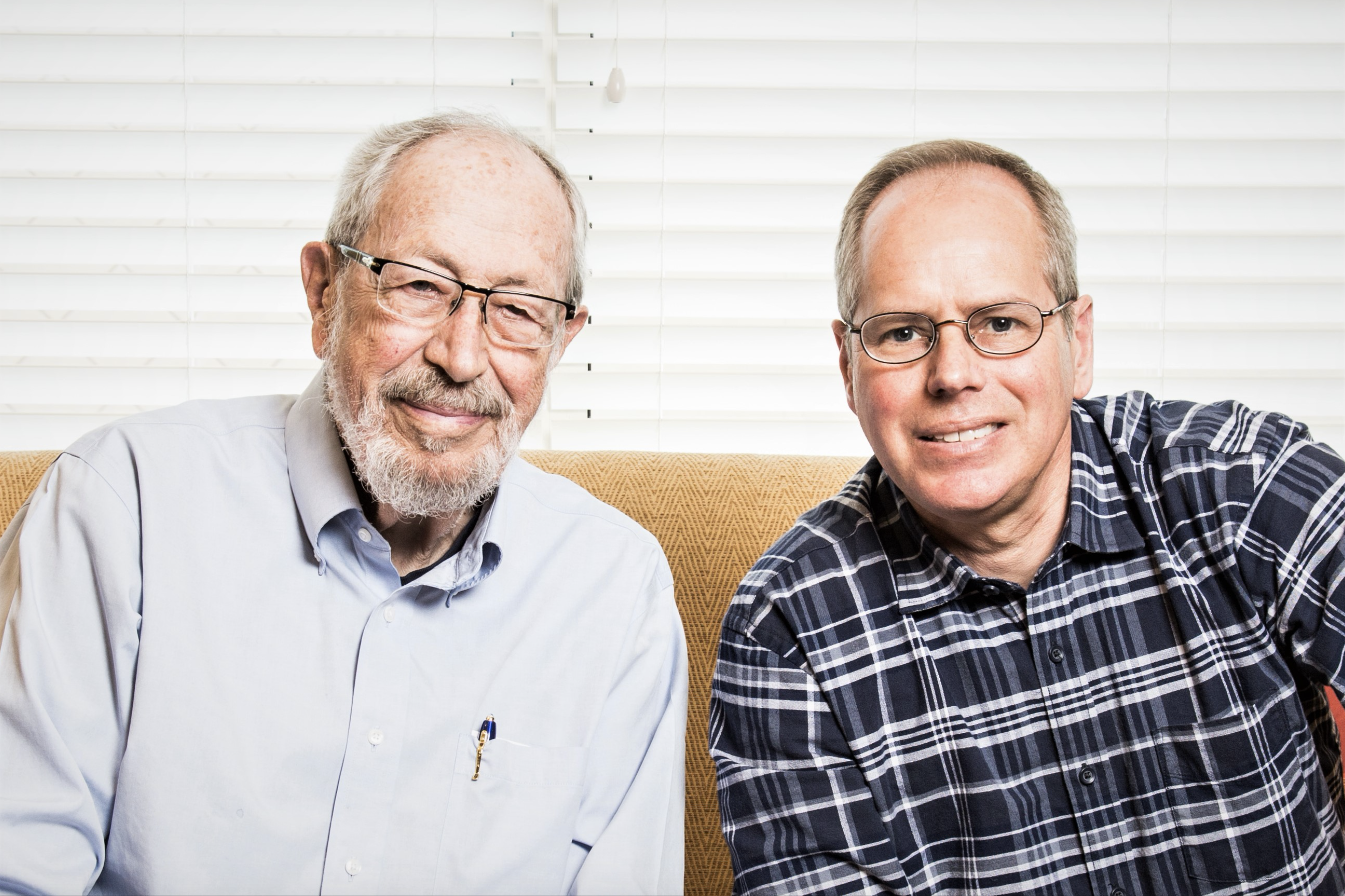 Edgar ‘Ed’ Henry Schein is a leadership veteran of the old school. He survives Kurt Lewin and Douglas McGregor, two of the greatest thinkers of the post-war age, with whom he worked at MIT. He lived through the invention of experiential education and the creation of the T-group – the training group, in which participants learn through interaction with each other – which the late psychologist Carl Rogers labelled the most important social invention of the 20th century.

Schein’s thinking is still influenced by ‘open systems’ theory and the spirit of inquiry. His son and business partner Peter, a strategy consultant in Silicon Valley, brings crucial new business perspective and experience to the Organizational Culture and Leadership Institute, which they co-founded. The younger Schein counts roles at Pacific Bell, Apple and Sun Microsystems as highlights among a glittering tech CV.

Whether in boardrooms or classrooms, it is helpful to begin a conversation about organizational culture, as Ed defined it as early as 1984: “The pattern of basic assumptions that a given group has invented, discovered, or developed in learning to cope with its problems of external adaptation and internal integration.” Does the definition hold up more than three decades later?

“Yes, I think that definition is more important now than ever,” says Ed. “Precisely because of what Peter and I have learned to ask about how one changes culture. The first mistake leaders make is failing to understand that culture is a product of your own group’s history. If you’re going to change anything, you’ve got to understand that history or you won’t know both what your strengths or weaknesses are.”

Ed considers the word culture itself problematic. “You should use the definition to frame the conversation and then drop the word culture almost immediately,” he says. “Instead, say, ‘Let’s look at our history and see what we’ve become and how we’ve gotten to this place’. Only then will we be able to understand the practice of culture, what gave rise to it, and what we may have to change.” 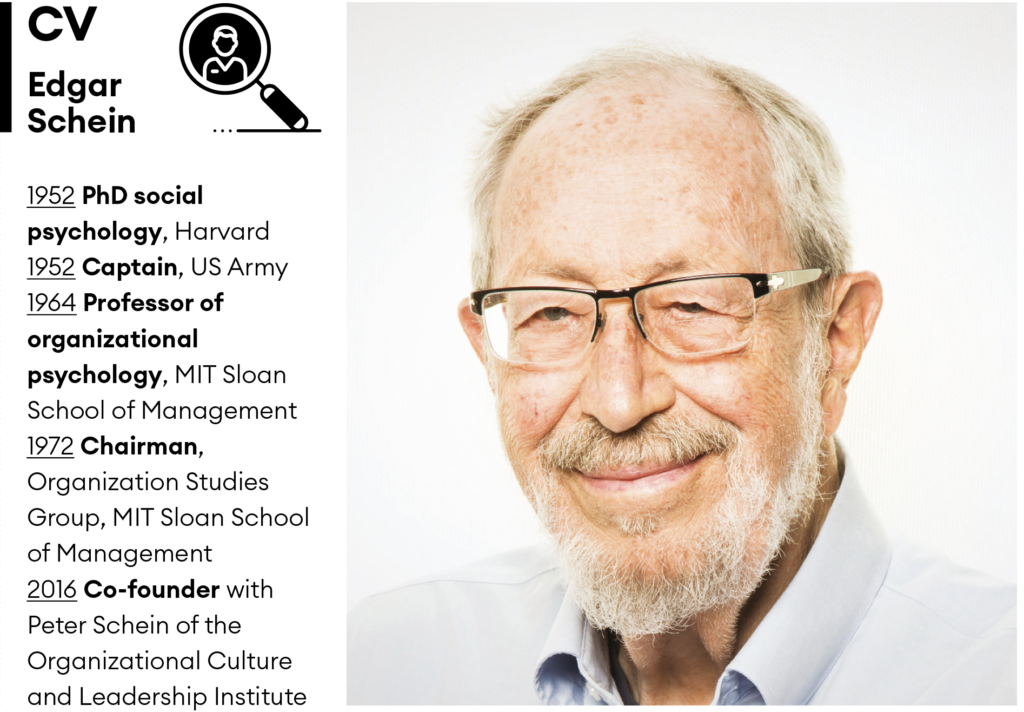 Organizational cultures are shaped by milestones: the business environment when the company was founded, the personalities of the founders, shifts in performance, or drives to reduce risk. It is crucial, says Ed, that people are able to excavate the company’s archaeology; to examine the historical building blocks that form its modern incarnation. “Whenever people want to know about their culture, the first question I ask is, ‘How much do you know about your founders and any turnaround leaders?’ If you want to know about the IBM culture, read the biographies of Thomas Watson Sr and Thomas Watson Jr. You’ll learn 80% of what you need to know. You want to know what happened to Hewlett-Packard? Look at the moment in history where they chose Carly Fiorina, an unusual choice of chief executive.

“What were they trying to do? Why did they do that? Her appointment clearly changed HP. Many would say for the better. Some would say for the worse. Those critical moments are created by founders or turnaround leaders.”

Fixing cultures is something turnaround leaders often promise to do. But, argues Peter, culture change is a consequence, not a lever. “The culture problem is something that’s just there,” says Peter. “It’s derivative. It’s in the atmosphere. How you get to understand who you are, what you can be, and how you must evolve the culture is by getting at the root of the business problem. It doesn’t really make sense to say, ‘We are going to fix our culture’. It makes more sense to say, ‘We’ve got things that we need to realign to succeed in a changing market and, to do so, we must adapt’. These are the levers that leaders can most easily pull and push.”

Peter cites the famous Netflix culture presentation as an interesting example. The document was created by chief executive Reed Hastings and HR consultant Patty McCord. “It is a very powerful document and is an example of an expression of their technical culture philosophy,” says Peter. “It’s senior leadership saying in both descriptive and aspirational terms, what they need to do to win in the market. However, it doesn’t necessarily describe what’s actually happening on a day-to-day basis – the social culture: the way work gets done.” 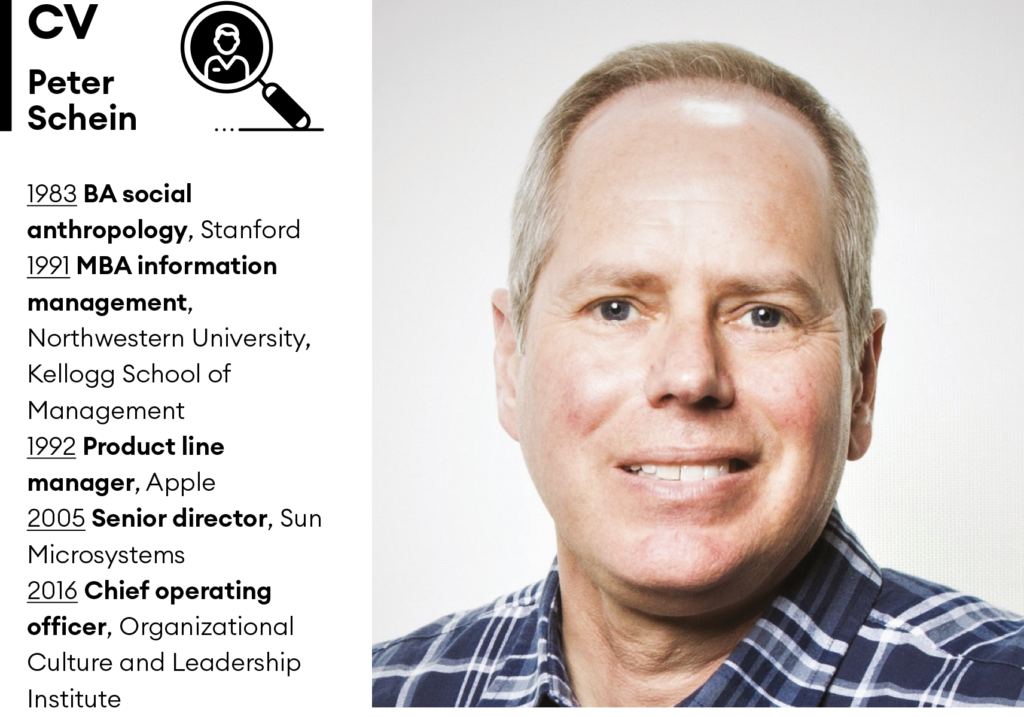 Leadership and culture are clearly intertwined. Culture develops over time, and as such is among the most stable things in a business. And although leaders themselves don’t directly change cultures, they may be the most important catalyst for it to shift, by helping the companies they lead adapt to a changing external environment.

“It usually works like this,” says Ed. “Founders say, ‘This is what we’re going to do’. And the company tries to do it and it works. Then the employees say, ‘Hey, we’ve got a smart founder. His ideas are good ideas. They’re working. Not only have I been hired because I already agree with the founder, but now I realize that what the founder thinks is the right way to think because it’s working.’ This gets transmitted across a couple of hiring waves and down the road it is simply seen as the right way to think and act. We forget that this was initially just an idea of a couple of people creating a company. And, because they happen to work and help the company succeed in external environments, they are seen as ‘the way we do things’.”

Yet one company’s stability is another’s inertia. Ed cites the case of Digital Equipment Corporation, which ceased to exist in 1998 following a period of sharp decline. “The environment didn’t want their fancy interactive computers anymore, but the culture was strong and stable,” he recalls. “The engineers said, ‘This is the way we work and what we build’. And for many of them, it was the best years of their lives and they wanted that to continue, which became a problem.

“It is often the case that people continue to believe in the technical or strategic philosophy, even though the company is threatened. The culture is so stable that it defines the next generation of what a leader of the group should be like, and that’s how bureaucracy grows – because the new chief executive is coming up through the system, they don’t have a founder mentality. What’s left are the good soldiers who want to continue this hugely successful machine we built. But this may be looking in the rear-view mirror.”

Ed looks back into the Big Blue: “This definitely happened in IBM,” he says. “Successive generations of IBM people became so ossified and so bureaucratic that IBM had to go back outside and find Louis Gerstner. He had a fresh view of IBM and brought them back to their original marketing sales orientation, which is where their skills were. Whether it is changing the culture or not changing the culture, you can’t separate culture from leadership.”

Ed makes a refreshing distinction between managing and leading. Managing, he argues, is getting something done, stabilizing existing processes, controlling and correcting deviations to ensure quality and reliability. Leadership is about doing something new or better, whether a simple process improvement or a transformation. It is more about reframing for improvement. It likely calls upon people to learn new skills and shift beliefs. He is adamant that leadership appears everywhere and anywhere, and that pegging it to hierarchies is perverse. “Our tendency to ascribe leadership to individuals that hold a formal entitlement as head of a team, group, or function is unhelpful when distinguishing management from leadership as activities with different purposes,” he says. “Leadership is not the property of a formal position, but rather an activity that occurs anywhere in the company. A person responsible for such a change is therefore in a leadership role irrespective of title.”

Leadership, say the Scheins, is always relational. There are two different levels of relationships. Level 1 relationships are defined as civil and transactional. “The parties may not really ‘know each other’ but are reasonably open with each other, while maintaining professional distance, and trust that neither will harm the other as they transact business,” says Ed. By contrast, Level 2 is more whole person to whole person. “It’s seen in close working relationships and productive and creative partnerships. A deeper level of openness and trust are the hallmark of such relationships.”

This sharp distinction is essential given the global shift in the way business works, says Peter. “The industrial might and success of the US was based on a linear machine model run on well-organized Level 1 relationships,” he says. “As it turns out, the world is not a machine. The world is a mixture of cultures and people with different values, and at the same time the science establishment and business community has begun to show us how enormously interdependent everything is, whether it’s physics and the big machines, or huge laboratories dealing with genomes and biological cures, the space programme, or our global commerce and financial system. You can’t get anything important done anymore in the modern technological world without dealing with enormous amounts of interdependency and much greater levels of collaboration.”

The risk to the US comes, says Ed, from its cultural aversion to collective action. “In this part of the world, the individualistic, competitive way is so embedded as a way of life and work, it permeates our cultures virtually unrecognized,” he says. “To solve the sort of problems we are now confronting and get the results we need, we have to figure out how we break through this. Our macro culture system has been built on transactional, professionally distant, machine-like interactions. Yet today’s challenges require systems based on Level 2 relationships.

“We don’t think about winning over our friends in the way that a typical employee thinks about winning over his colleagues, because employees are in this steep pyramid where they can’t all win. The leadership of the future needs to create conditions that stimulate and scale Level 2 relationships and remove – to the extent possible – the incentives to beat each other up and compete with each other. We need to recognize that in order to solve our new problem sets, we actually have to accept the complexity of our interdependence and build organizations based on a new level of relationships. And the only way we’ll be able to do that is not just to collaborate occasionally when the task requires it, but to get to know each other better, and work in an open collaborative way all the time.”

The Scheins’ testimonies reveal that organizations and the traditional model of organizational relationships belong in a bygone era. Restructuring and stretching the prevailing organizational model to remove a few barriers to collaboration will be insufficient. Instead, leaders need to perceive the challenge as relational: how do we build stronger bonds and levels of trust and openness, to match the complexity we are in?

The two Scheins nod their heads. “We’ve provided you with the theory,” says Ed. “We said the way you build trust is to get to know each other. That is truly the answer. The more we know each other, the more we decide that, ‘This is for me’ – I discover this person is interesting, and we have something to contribute to each other. We don’t have to be friends with everyone at work, but when the work is interdependent, Level 2 openness and trust are essential.”