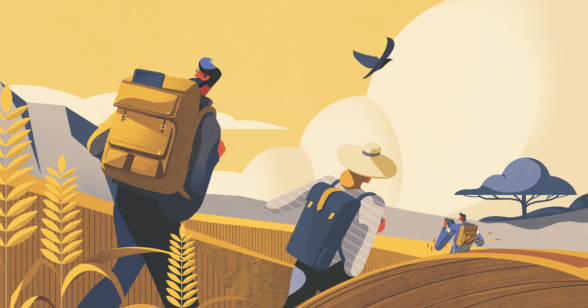 What does it mean to be ‘footloose’ in today’s working world? Well, in 1984 it was a film about a big city teenager, played by Kevin Bacon, moving to the fictional small town of Bomont, where rock music and dancing were banned. Bacon’s character’s rebellious spirit shook things up – literally and figuratively. Beyond just the dancing, a very traditional way of life was replaced by a new paradigm. And that’s exactly what we’re seeing today in business.

While we’re on the subject of Footloose, you’ve probably also heard of Six Degrees of Kevin Bacon, the parlour game wherein everyone in Hollywood was said to be less than six degrees of separation away from said actor. It soon came to apply to all us non-celebs, too. These days, with new technologies and social platforms, we’re more like two LinkedIn degrees away from one another… and from Kevin Bacon himself.

These factors, among other things, have brought us to the modern day gig economy, where gig is shorthand for project-based work. Freelancing is not new, but the technology that drives the contract and on-demand labour market is. The fast pace of technology is cited in leadership studies, again and again, as one of the biggest sources of anxiety. But we can’t put our heads in the sand and not deal with it. It’s here. And it’s time to accept that newfangled way of dancing.

No matter what you’ve known until now, the current gig economy probably isn’t what you think it is (i.e. just Uber and Airbnb). In 2017, Upwork and Freelancers Union conducted their fourth annual study Freelancing in America: 2017, which surveyed 6,000 US workers, and predicted that, by 2027, the majority of the US workforce will freelance. As of 2017, 36% of the total US workforce freelanced and a whopping 47% of Millennials choose to gig over full-time, traditional work. Gig workers contribute approximately $1.4 trillion annually to the economy – an increase of almost 30% since 2016. Results also show a progression of fewer moonlighters and part-time freelancers, and more full-time freelancers (17% in 2014, up to 29% in 2017). In fact, the US freelance workforce has grown three times faster than the overall US workforce since 2014.

It’s not because they aren’t full-time positions. Rather, freelancers are leaving traditional employment because they want to. Asked about whether they started freelancing more by choice or through necessity, 63% of freelancers said by choice, up from 53% since 2014. Compared with traditional jobs, freelancers report that “freelancing makes me feel… free, independent, in control, good, and empowered.” Furthermore, freelancers increasingly think that having a diversified portfolio of clients is more secure than one employer (63% agree, up ten points since 2016).

In turn, employers are looking outside of traditional recruiting methods. Thanks to social media, companies are now crowdsourcing leads. It’s not unusual for a private Facebook group to solicit talented folks. A recent posting on a female executive group I belong to called for recommendations for a director of public relations. The poster requested a direct message with full details, so that she could put the referral directly into her Bay Area software employer’s pipeline, skipping the typical recruiting rigmarole.

Just as the town of Bomont had to let go of its old social contract and embrace dancing as a force beyond its control, we too must change our perspective in order to be successful in the future of work. It used to be that an employee would trade their hours and loyalty for a pension and gold watch. This wasn’t true for freelancers, of course. But, today, without pensions or gold watches for anyone, there isn’t as much of a dividing line any more. Workers cannot control whether their job will actually be there in the future (whether the company they work for is gone by then, or a robot takes over their tasks). In fact, 54% of the US workforce said they’re not very confident that the work they do will actually exist in 20 years. What these individuals can control is their own skillsets.

As work changes, reskilling is critical. This is exactly why 55% of freelancers participated in skill-related education in the last six months. There is tremendous opportunity … but not for everyone. Freelancers have to position themselves as the very best choice in a sea of options. They must uncover their unique value proposition (UVP) and broadcast it to the world, on a variety of platforms. In the past, UVP is something that only corporations had to think about. On the talent acquisition side of the equation, we must also take a hard look at what we are offering the candidate. It is no longer an extra to offer training, on-the-job skill enhancement, and having workers really feel like they add value and make a difference. If they don’t feel they are getting value (regardless of salary), they will move on.

So it’s obvious: freelancing is the future. Even so, education and government haven’t yet caught up to this reality. How can we progress? Well, we need to teach problem-solving skills – especially when the ‘problem’ is undefined. Decision-making today happens at lightning speed. And, as you know, not making a decision is, effectively, a decision. There will always be things we don’t know, but we have to know how to take action. With this swiftness of decision-making comes more risk than corporations have historically had. We have to let our people (both employees and contractors) try – and potentially fail. As always, fear flares up in the face of uncertainty. We want to hold on to our old ways, but we simply cannot.

What about the other side of the table? Employers, too, must take a new tack. As an employer, you must change the way you look at the collective. Everyone has to be on the team, employees and freelancers, without any sense of who is better. There must be less authoritarianism and more collaboration, which means letting go a little more, too. Micromanaging just doesn’t work with gig workers.

For its annual ‘Best Companies To Work For’ survey, Fortune magazine has a brand new metric for 2018: how well companies create a consistently positive experience for all employees, no matter who they are or what they do for the organization. It’s not a toothless feel-good ‘diversity and inclusion’ metric. This ‘for all’ standard proved companies saw three times the revenue growth than the less inclusive companies. I think companies can agree that this ‘for all’ leadership is good for business, period.

When we presented tough news in the office, we used to say, “It’s not personal; it’s just business.” That’s just not true anymore. The paradigm has been completely turned on its head. When workers learn to swim in this new sea of insecurity, and they continue to hone their talents to become the very best, they need a bigger reason to be part of your team than money. If you make it about an hourly wage, at some point you’re going to become priced out by competitors and lose out on top talent. You have to make it personal and give gig workers a reason to choose your team. They must feel valued and be seen. Genuinely ask them to dance, and maybe you’ll enjoy the freedom and flexibility as well. Everybody cut footloose.

— Olga Mizrahi’s new book The Gig is Up: Thrive in the Gig Economy, Where Old Jobs Are Obsolete and Freelancing Is the Future is reviewed by Dialogue’s expert books columnist Piers Cain