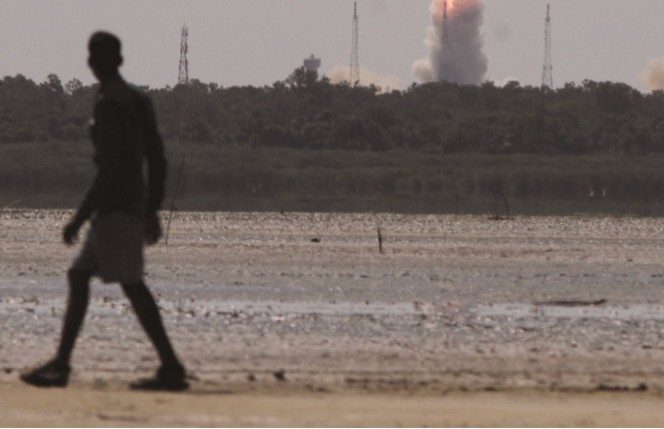 The West’s lumbering companies could learn much from innovation east of the Arabian Sea, writes Nikhil Raval

Nine out of ten companies consider innovation core to their corporate agenda. That’s my assessment, having travelled the world meeting leaders from corporates across the globe. So why are so few companies actually innovative? Why can only a derisory proportion demonstrate a focus on the future? We often review a company’s leadership competency framework when designing a development programme for managers. These competencies define the key set of skills leaders should possess – there is no surprise that ‘innovation’ features on the list. But saying it is one thing, doing it, quite another.

Just as leadership is contextual, so too is innovation. Each individual, each company and each country has its own reasons to innovate. Similarly, each firm has its own opportunity, environment, resources and constraints to deal with. While many theories and models have emerged to unpeel this black box, there are some basic tenets we can learn from innovation from around the world. Let’s chronicle some basics of how innovation has succeeded in the East and what learnings we can derive.

Say “innovation” and immediately we think of companies such as Google, Amazon and eBay. While these are all very innovative companies, we can learn a lot from countries like Japan and others in the East, which ruled the innovation roost until the 1990s. In fact, Japanese lessons of innovation from the 1980s and 1990s are still relevant today – the first lesson being that innovation means taking a long-term view of market opportunity. The Japanese wove this philosophy into their companies from the outset – especially electronic manufacturers – and so were able to produce one innovation after another. Companies’ obsession with next quarter’s numbers ultimately impedes the investment case for an idea that does not pay back in the short-term.

A second lesson from Japan is that open innovation will typically deliver better and faster results. This came naturally to the Japanese who were well versed in the Shukko system of transferable employment. Shukko causes groups of likeminded colleagues, supply-chain partners and customers to collaborate to seek new opportunities. Collaboration and transferring an existing idea to a new context are fundamental to idea creation.

A third learning relates to how employees are trained and managed. Japanese employers believe that employees are great sources of innovation, as long as they are educated to understand the whole organization, customers and the competition. Given the freedom to think about the future, the industry and how customer needs are likely to evolve, colleagues inside the organization can generate idea after idea. This is how Toyota maintained market leadership, as documented in the hallmark book The Toyota Way.

India has led the way with the concept of ‘frugal innovation’. In response to limited resources – financial, material, or institutional – its aim is to minimize the use of resources from development to delivery. Inevitably, this can only be achieved through innovation – and results in products or services at significantly lower costs. But frugal innovation is not only about lower costs. Successful frugal innovation may also outperform alternatives and can be made available at large scale. For example, Jaipur Foot is a company in Mumbai which uses rubber, wood and tyre cord to construct a prosthetic limb for under $50, with functions that match models costing $12,000. So, low cost doesn’t mean low quality! Frugal innovation pushes for making things at a lower specification – but not at the cost
of performance.

At Tata Motors, Nano is the $2,000 car that made news across the globe. It shows how frugal innovation remodelled the entire process of automobile manufacture to achieve a cost target, making owning a car a realistic prospect for millions of people who would otherwise have no chance of becoming private motorists. This meant having a new engine management system, lightweight steering shafts and a redesigned engine-cooling module. With the help of partners from around the world, the car was successfully built. The innovation also required remodelling the service side, from repairs to financing.

With a culture of creative improvisation, the mindset and skillset for frugal innovation are in abundance in India. Jugaad is a colloquial Hindi word that translates roughly as overcoming harsh constraints by improvising an effective solution using limited resources – tellingly, perhaps, English lacks a direct synonym. Jugaad is exemplified all over India, with diesel engines attached to carts to create trucks and other creative novelties. The jugaad mindset promotes the notion of seeking opportunity in adversity and doing more with less – both critical factors for
frugal innovation.

India bears extreme economic conditions and gaps in the provision of services. Most of the rural population lacks services in healthcare, drinking water, and sanitation facilities. Frugal innovation provides low-cost solutions to meet basic human needs. A growing consumer base that is extremely price-sensitive is also pushing innovation in affordable necessities. While classic innovation indicators – such as patents – measure low, in reality many private firms are innovating services, processes and business models, which are overlooked by standard measures of innovation. Thus frugal innovation can be thought of as a hidden gem of
the East. 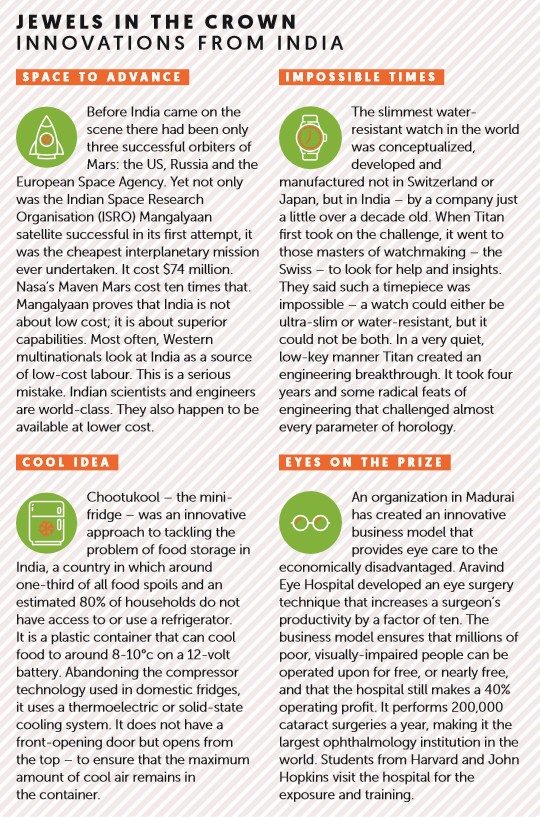