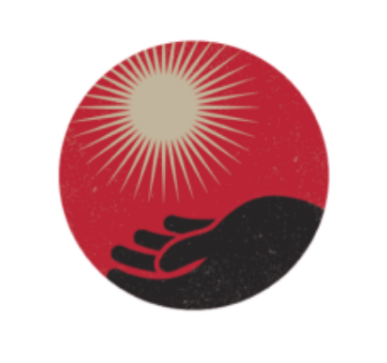 Create a climate where ideas-making is once a day rather than once in a lifetime, says Tom Hughes

I work with leaders from all around the world. We discuss their issues, their challenges and what they’re trying to do about them. And one of the most common testimonies, meeting after meeting, in company after company, everywhere I go, is: “We need to innovate.”

When I ask them to give me examples of innovation, I keep hearing words like iPhone, Uber and Airbnb. In fact, these examples have become so commonplace in workplace conversations, training programmes and journals, that I’m starting to hear responses echoing one I heard recently: “I’m so tired of hearing about Uber. I get that it’s cool; I use it myself. But that’s not an example that’s going to help me.”

I don’t think the guy who said that was alone. The big name products, services and apps that get a lot of the ‘innovation spotlight’ are wonderful, and I too use them. But most of us don’t need to create something like that in order to achieve our innovation goals. In fact, a lot of us shouldn’t even be trying.

Those who don’t aspire to be at the forefront of the next seismic disruption – but do feel the need to be constantly improving and responding to shifting market, consumer or customer expectations – should pursue an alternative goal: everyday innovation.

Everyday innovation is, at heart, a mindset shift, supported by the power of five key tools. It is a way to make gradual but consistent improvements to the environment you create in your teams and organizations: the way you collaborate, and the degree of creativity you and your people bring to your work (see Figure 1 below). 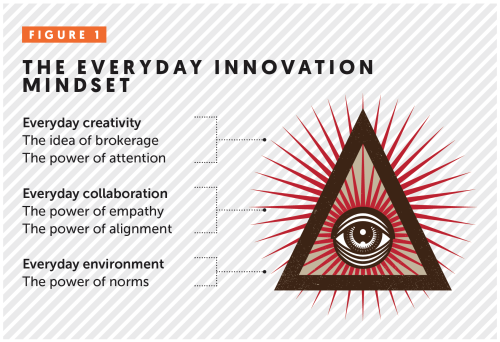 Let’s look at these one at a time.

The power of norms

Many readers will be aware of the amazing work coming out of Google’s Project Aristotle. Google turned its formidable analytic capabilities on itself to discover why some of its teams so clearly outperformed its other teams. Through extensive research, it eliminated all kinds of possibilities, including skill differences, personalities, styles and access to resources.

1 – Team members shared conversational airtime more or less equally – everyone participated, nobody dominated and nobody checked out

2 – Team members had a high average level of ‘social sensitivity’. In other words, they were good at telling how each other felt

The power of empathy

There’s an old parable attributed to Chuang Tzu, a philosopher in the Chinese Taoist tradition. It goes something like this:

A man is in his boat near the shore of a river. He sees another boat coming directly towards him, and yells out for the owner of the other boat to turn away, since he, himself, has no way of diverting his own path. The boat continues directly towards him. Now furious with the unseen boatman, the man shouts out again, with no result. He shouts for a third time, this time more urgently, but to no avail. The oncoming boat crashes into his. As he prepares to scream at the owner of the offending boat, he discovers that the boat is empty, apparently having broken loose of its moorings. As there is no-one to yell at, no-one to be angry with, the boatman’s anger immediately dissipates. The moral of the story? The boat is always empty. When we are able to see clearly what is really happening, when we understand the perspective of the other party – in this case, the empty, uncontrollable boat – we manage our feelings and behaviours better.

Similarly, you and I have a choice about how to respond to our circumstances: will we become angry and upset with stakeholders who “just don’t get it”, or who restrict our ability to move our projects forward? Or, will we make the decision to do a little more work, both emotionally and intellectually, to understand their perspective? If you truly want to collaborate with colleagues, peers, partners, vendors, customers and so forth, you must take the time to understand not just what’s in it for you, but what’s in it for them. Sometimes you know the answer. Sometimes you have to find out – either by using your imagination, or by simply talking to them.

The power of alignment

Collaboration and an organization’s collaborative power can be classified based on the way the interests of the parties align. In my experience, there are broadly three types of alignment to consider – agreed, synchronized and hierarchical (see Figure 2 below). 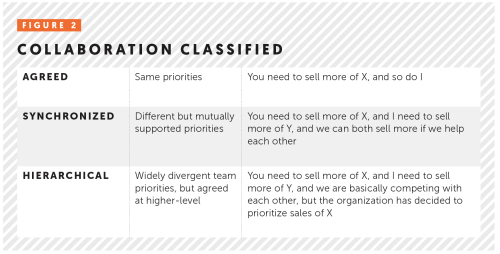 The first type of alignment is a simple agreement between peers. This is when you and I share a common goal, common task or common target. Typically the biggest obstacles to achieving this kind of alignment are a) discovering that we have something in common; or b) finding or making the time to sit down together to actually discuss how we can support one another. In any organization, there’s almost always someone or some team or department who is working towards one of your goals. It is a great force multiplier when you can find those agreement partners, and work together.

The second type of alignment is synchronized. This is when you and I have different priorities or aims, but we are in an excellent position to help one another. It involves a – more or less – fair trade of effort. An easy example is cross-selling products or promoting mutually supportive internal initiatives. For instance, I was once responsible for designing and delivering a training programme for the administrative staff of a consulting firm. Someone else was responsible for developing and executing a range of HR solutions for the same team. While each of us was perfectly capable of delivering our own work independently, we found that we could help one another by synchronizing our efforts, and each project turned out better than it would have otherwise been.

The final type of alignment is hierarchical. Unlike the previous two, it can feel like there are winners and losers in this scenario. Every leader and every team has priorities: projects, initiatives, products, services that define your success. When you set about trying to collaborate with colleagues, it sometimes becomes clear that one of you is working on something that is simply more important for your organization than the other.

Hierarchical alignments are the most difficult collaboration scenarios to handle, because they call for both parties to openly acknowledge the disparity in priorities. This is easier said than done because managers, employees and organizations are often reluctant to admit such disparities exist. They may not even be aware of them. Even when disparities are acknowledged, more problems can occur. It is easy for the higher-priority party to become arrogant or pushy, and the lower-priority party to become defensive and territorial. It is important that both resist their respective temptations and view this as an opportunity to do the right thing for the organization.

The leader who has the lower priority needs to adopt an organization-first mindset and throw as much support as they can behind the higher priority. This may extend to requesting that high-level leaders relieve the lower-priority leader of tasks or responsibilities, to create more capacity for supporting the higher priority.

The leader with the higher priority must, in turn, do everything she can to acknowledge and support the leader with the lower priority. She may be able to find some way to support their activities. By whatever means, though, it is her duty to reward the help. It is particularly beneficial if the organization has a way to reward the enterprise-focused actions of both leaders.

The power of idea brokerage

Idea brokerage is a powerful tool that can foster everyday innovation. This is very simply the idea that many of the things we think of as being ‘creative’ are in fact the blending or combination of pre-existing ideas. For instance, one of design agency Ideo’s big successes – a leak-proof water bottle – was essentially a traditional water bottle with the leak-proof opening of a shampoo bottle.

In 2013, a team of researchers, led by Brian Uzzi and Ben Jones of Northwestern University’s Kellogg Business School, published the results of their study of 17.9 million academic papers on creativity. By examining the sources cited in the papers, they could estimate the creative impact of each paper on others. Their big insight? “Novelty and conventionality are not opposing factors in the production of science; rather, papers with an injection of novelty into an otherwise exceptionally familiar mass of prior work are unusually likely to have high impact.”

Going back to Uber, the taxi app has gained a lot of credit for being a revolutionary concept – and it is. But if you look at its component parts, it’s really the combination of several well-known functionalities used to tackle a well-known problem. The same is true of virtually any high-profile ‘breakthrough’ idea.

So what does it take to be an idea broker? According to Charles Duhigg’s book Smarter, Faster, Better, anyone can play this role – though it is easier if you have seen a wide range of challenges and solutions in different settings.

And the behaviours you need to adopt are very simple:

Rather than focusing only on the problems, become a collector of interesting ideas and solutions.

Act as an intellectual ‘middle-person’ – having spotted good ideas, it’s important that you move them around. Look for openings rather than hoarding ideas for yourself. Share ideas from different departments, companies and industries.

An appropriate amount of tension or anxiety can trigger the impulse to look for the “injection of novelty” your situation needs.

The power of paying attention

As long as humans have been recording stories – and thinking about what they record – there has been a sense that there is a very limited range of plots. Consider the Greeks’ duality of tragedy and comedy. Or, for a slightly wider palette, take Christopher Booker’s modern-day idea that there are only seven basic plots that all novels, movies and plays are built upon – overcoming the monster; rags to riches; the quest; voyage and return; comedy; tragedy; and rebirth. All the stories we find compelling fall into one of a limited number of basic patterns.

In the same vein, I recently led a workshop on this topic of everyday innovation with a group of senior executives from a leading aviation company. When I asked them to tell me how many business questions there are – in the spirit of the seven plots concept – there was considerable disagreement on how to categorize them, but strong agreement that there were only between three and five different kinds of problems. If this is true, it means that when leaders really pay attention, they will often see that they have dealt with challenges in the past that can be referenced to solve current – apparently dissimilar – challenges.

So, what do you pay attention to? The short answer is: everything. Who knows where the right idea will come from? The longer answer is: pay particular attention to the way challenges similar to yours get answered outside of your team, your department, your organization and your industry. Why? Because most of us tend to go back to our old answers, which means most of us will tend to get the same old results. New answers come from new contexts.

There are a lot of everyday problems that can be more than adequately solved using everyday innovation. And the great news is that the behaviours that lead to this kind of innovation also lead to highly satisfying interaction on teams. That is some result: more innovation and a more satisfying working environment. Every single day.

Tom Hughes is a Duke Corporate Education educator. He has worked on Duke CE programmes for over a decade.