‘You cannot be serious?’ Wimbledon competitor John McEnroe shouts at the tennis umpire who awarded a point to his competitor in 1981. The outburst darkens his otherwise glittering career to this day.

Sport provides excitement, tension and drama. Fans marvel at the skills of the players, how they tussle and adapt to each game and different opponents.

But what makes us support one player, or another? Their nationality and their values, yes, but also their personality. And, wow, there’s a massive range to choose from.

The sheer ‘entertainment factor’ of sporting personalities, however, is dominated by the latter end of the spectrum – emotional outbursts keep people tuning in.

But do such angry outbursts make for better performances?

A new analysis by IBM Watson and The Telegraph has revealed that in the case of one particularly prominent example of an angry tennis player, the answer is ‘no’. 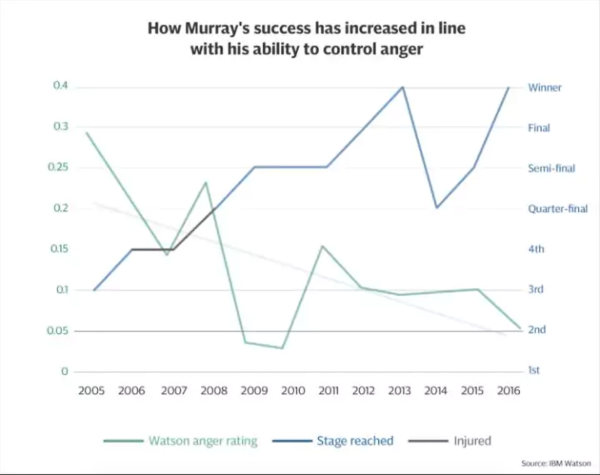 Results of an analysis (highlighted in the figure, above) of all of Murray’s Wimbledon performances (the tournament stage reached) versus the number of ‘anger’ indicators he displayed at each tournament (Watson anger rating) show that managing and processing anger – not putting on wild (albeit entertaining) displays – can improve performance.

Anger in the wider world

The parallels between elite sportspeople and executives at the top of their game are vivid.

Just like a Wimbledon competitor, in the workplace we have a particular skill, a focus and an objective we are trying to deliver.

And, also like Wimbledon competitors, our emotional make-up becomes a prism through which we engage with the world around us – and this can make all the difference between successes and failures.

10 things to keep in mind about anger, both on the court and in the office

1. Anger is an important primal human emotion, intended to help us react to danger.

2. Anger can also give us a focus and ‘flow’ to channel energy and can be used for example to challenge injustice or to fight a cause. But…

3. …anger can be confused with aggression and inappropriate assertiveness.

4. We need to understand our anger ‘triggers’ and how we react to anger from others – this will help us control destructive anger.

5. We have a vast and complex emotional repertoire, yet rarely invest time in understanding it – make some time to think through why you feel the way you do.

6. Remember that we CAN be intelligent about our emotions, managing what we express, why and when.

7. You will better understand the emotions of others once you have understood your own.

8. Emotions don’t necessarily have to control us – we can learn to control them to work for us.

9. In extreme fits of anger, count to ten (1, 2, 3 and so on) before reacting. This is about the time it will take for you to start feeling more level-headed.

10. Emotional intelligence doesn’t just happen, ask for feedback from others and work on this aspect of yourself.

Beyond the formal punishments that can follow volatile, inappropriate responses on the court and in the office (yellow and red cards, penalties, fines and so on), not managing your emotions can cost your performance.

In other words: ‘You cannot be serious?!’ cried John McEnroe. Well, yes, John – it can be very serious.

– Rick Hughes and Andrew Kinder are co-authors of The Crisis Book, pulling together 70 key themes with the capacity to generate a crisis situation, as well as guidance and advice on how to manage situations before they get out of hand.