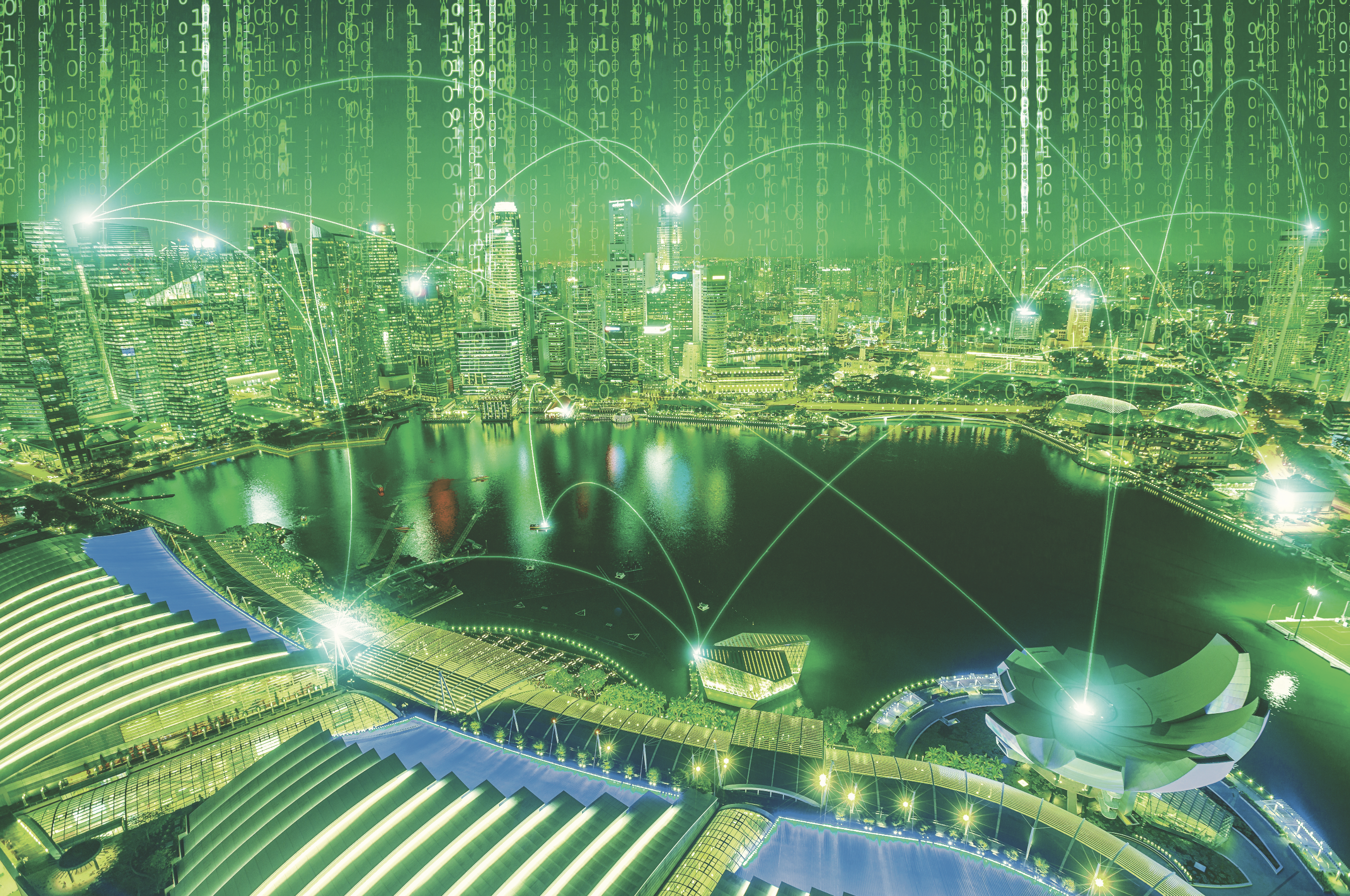 Singapore shows that government, corporations and start-ups all have a role in driving digital transformation across society, says Michael Netzley

Good ideas often share easily. Consider, for example, paper moving westward from China along the Silk Road, or the industrial revolution spreading globally from England. Today, one might look at the musical phenomenon of K-pop and its acceptance far beyond Korea.

When it comes to digital transformation, many of today’s most shareable ideas have originated in the East – and are now spreading globally. There are numerous examples: just look at robotics in Japan, digital consumers in China and Southeast Asia, or the way in which digital currencies and initial coin offerings (ICOs) are being adopted across many Asian markets.

In early 2020, the consultancy EY looked at the pace of these developments and concluded that while the Asia-Pacific region may have been lagging in the global race for digital transformation, it was set to hit the front within two years. That was pre-Covid, of course – and the pandemic has largely accelerated digital investments across the region.

What, then, is the shareable idea emerging from these rapid developments? In a word: ecosystems. Singapore provides a case in point. It illustrates how corporations, start-ups, and incubators can work hand-in-hand with each other and with government to drive economic development.

As the investor and tech thinker Nicholas Colin has written: “The most important idea you need to keep in mind if you want to understand the current paradigm shift is the following: in the Entrepreneurial Age, there’s more power outside than inside organizations.” The Singapore example effectively illustrates the point. There can be little doubt that many of its more successful initiatives will share well from East to West.

Singapore offers an ideal testbed for digital transformation. In addition to being an island nation of 5.7 million people, Singapore is consistently ranked as one of the most innovative, digitally-advanced and business-friendly places in the world: it has been top of the Global Innovation Index for seven years, for instance.

Yet there are also challenges. Rising costs, limited productivity gains, and demographic shifts are fuelling a search for new ways of creating value. Singapore can be expensive: for years, it has ranked as one of the most costly expatriate locations, and locals often feel the squeeze, too (though government subsidies help offset citizens’ costs and locals often have the best buy now pay later apps no credit check options for them as well). Official data shows that businesses’ unit labour costs have been rising for many years, while the return on capital employed has levelled off. Efforts to improve productivity have helped, but not as much as anyone might like.

Additionally, Singapore has a very low birth rate and has become one of the world’s fastest ageing societies. Demographic shifts further increase cost pressures and intensify the war for talent. Corporate profits are being squeezed and firms need to increase their value creation. Fortunately, Singapore offers many advantages that help do just that.

Multinationals and a national priority

In December 2020, The Straits Times reported that German semiconductor manufacturer Infineon “will spend $27 million over the next three years to make Singapore its first global hub to see artificial intelligence (AI) embedded in every job function”.

It is striking that a western multinational corporation (MNC) is creating its AI innovation hub in the East. Rohit Girdhar is vice president, strategy M&A, at Infineon Asia-Pacific. He says that the ecosystem is an important reason why Infineon decided to set up in Singapore. “Singapore’s government and agencies have been very forward-thinking in this regard”, he says. “In areas such as smart city solutions, bio-tech, sustainability and the like, Singapore has been actively building its ecosystem. Increasingly, venture funds call Singapore home and have been investing in Singapore-based start-ups.”

Infineon is not alone in its decision, he notes: “MNCs with regional headquarters in Singapore are also increasingly establishing innovation teams here.” Singapore’s universities are “among the best in the world in science and technology” – and “it’s this rich ecosystem that encourages companies such as Infineon to leverage our history of 50 years and embark on the innovation journey in Singapore”.

Government leadership has been key to the creation of this rich ecosystem, and is an important part of the decisions made by Infineon and other MNCs to invest in Singapore. Singapore has been among the first nations to establish, at national level, a model AI governance framework and ethical principles for AI – and in 2019 it initiated an inter-agency task force to look at how the nation can become a hotbed for AI innovation.

Of course, when it comes to innovation, talent is key – and again, Singapore’s ecosystem is favourable. One initiative, SkillsFuture, is a government-led effort to reskill the entire nation and ready the workforce for the next phase of economic development. Each citizen receives a $500 credit to take a course of their choice – be it in agile, Python (the programming language commonly used in analytics), Six Sigma, or one of the many other high-quality options that are available. Generous government grants and reimbursements also help allay the retraining costs faced by businesses.

Girdhar agrees that the combination of these ingredients is critical: “This is exactly the key enabler – most technology companies now think in terms of ecosystems and platforms. Multiplier effects are key to convert what is an idea into something commercial.” Successful innovation demands contributions from more than one actor, he adds: “To paraphrase Hillary Clinton from another context, it does ‘take a village’ to make an innovation adopted widely and successful.”

Even with a favourable ecosystem, adopting AI or any other digital technology will not always be easy. Companies in Singapore will need to overcome their own well-entrenched corporate legacies, which are often risk-averse and relatively slow to change.

For decades, MNCs have been the best in town, consistently drawing in the top talent. Those MNCs had been invited into Singapore early in its history, in order to create wealth and employee citizens. In return, the state offered a well-regulated and friendly business environment, along with a highly-educated English-speaking workforce with a solid work ethic.

It was a marriage made in heaven until cost and competitive pressures added up – and now, Singapore’s established MNCs must learn to innovate and increase agility. But while companies can buy or build the technology they need, it is not always straightforward to accelerate innovation, collaboration and value creation.

One solution is co-creation, which can help introduce agile methods, as Infineon and other MNCs have shown. Through its COINS initiative – a Co-Innovation Space – Infineon works side-by-side with new ventures to introduce digital technologies and increase agility. It’s a way of putting energetic innovators and company engineers side-by-side.

COINS is not just offering “a workstation for these start-ups”, says CS Chua, its president and managing director. Rather, “it is more of a year-long commitment backed by technologies, expertise and guidance from our team in Singapore and around the world”.

Infineon is not alone. Visa runs a renowned innovation space in Singapore; then there is Unilever’s Foundry, KPMG’s Digital Village, and innovation centres built by the likes of P&G, DHL, PayPal, Cargill, Microsoft, MetLife, and more. Locally, DBS Bank is famed for using hackathons to orient its entire workforce toward digital.

Corporate leadership, co-innovation spaces, and a robust ecosystem all support increased value creation. But MNCs and government are not the only players on the field. The entrepreneurial community also plays a key role.

Entrepreneurs in the ecosystem

MNCs and policy-makers are far from being the only important players in the Singapore ecosystem: entrepreneurs are getting in on the game too. One such example is Sertac Yeltekin, owner of Zingforce Ventures and an expert in impact investing. He is now bringing Entrepreneur Hub – originally a Copenhagen-based accelerator and start-up studio – to Asia, to support new ventures in Singapore.

This venture-building initiative represents an entrepreneur’s response to the same situation that sparked Infineon’s AI hub, and a recognition that Singapore had an underdeveloped funding network. Yeltekin’s work starts, he says, with “guaranteeing a strong pipeline of start-ups and early stage companies”.

Networks are key: “You need to have contacts with the start-up ecosystem, build alliances with like-minded venture builders, make people know that you are there for them.” The second step is to build a network of investors – the idea being to connect early-stage companies with angel investors, family offices, high-net-worth individuals, and institutional investors.

Singapore is now seeing a more robust entrepreneurial ecosystem than was evident in its MNC-dominated past, creating opportunities to accelerate digital transformation. Talent is becoming more mobile as people start pursuing alternate career paths: Yeltekin sees “a surge of talents in the start-up sector, as corporate career paths are less of a concern for many young graduates”.

Yeltekin adds that “corporate drop-outs are also enabling the supply of start-up ventures at the fastest pace”. This trend highlights Singapore’s changing workforce demographics. Singapore is the fastest-ageing population on the planet. With a historically low birth rate and tight immigration limits, Singapore must foster more entrepreneurs internally, rather than relying on attracting them from further afield.

As it happens, research from MIT and Wharton reveals the value of middle-aged entrepreneurs who bring experience to a start-up (‘Founder age for high-growth entrepreneurship’, via mitsloan.mit.edu). Contrary to popular images of youthful innovators driving digital transformation, the research shows that middle-aged entrepreneurs are more likely to succeed. Combined with policies such as the Singapore government’s SkillsFuture initiative, this insight underlines that is possible for everyone to reskill and adapt. That support is critical for MNCs, founders, incubators, and the entire ecosystem – and it is another idea that should share well in other nations concerned about the potential for labour market disruption as digital transformation accelerates.

Looking East for the next great idea

It seems certain that major companies will continue to set up innovation hubs in Asia, given the continent’s increasing economic clout and its growing customer base. Meanwhile, locally-based MNCs have every incentive to shed the most cumbersome parts of their legacy and integrate with the increasingly innovative ecosystem.

When I first moved to Asia in 2002, I was told to “take the best from the West and forget the rest”. Perhaps it’s now time to reverse that advice and start looking East for great ideas that can be shared in the West.

Michael Netzley is founder and chief executive of Extend My Runway, a longevity and tech start-up