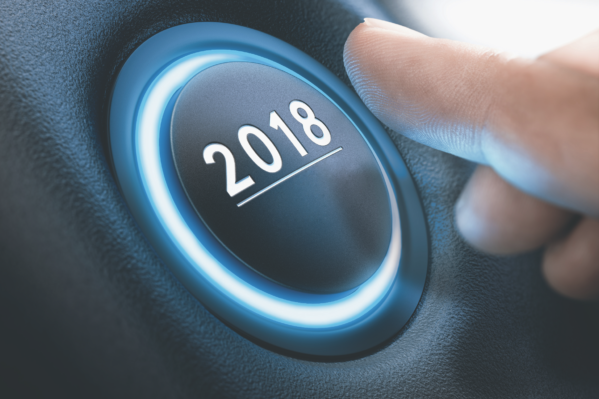 This year will be a year of unusual earthquakes. If 2017 was exciting, expect 2018 to be strange and extreme. The strangeness will be found in the world of technology.

The race is on. In the financial services, energy and automotive sectors there is a battle for the positions at the top because by the end of 2018 things will start shaking. Artificial intelligence has already started to replace larger parts of our jobs, as we defined them, but until now it has been good news as the need for new jobs has been greater than the ones getting replaced. One of the most popular questions asked in 2017 was: “Hasn’t it always been that way? Jobs go away and new ones are created?” The answer is no! This time around it is different.

Unlike previous revolutions, such as the Agricultural Revolution and the Industrial Revolution, there is a fundamental difference. Seminal changes have always been focused on authorities and technologies. This time, however, the authorities are algorithms. The new rulers of the world are algorithms run by a very small netocracy. Artificial general intelligence (AGI) will turn our world upside-down. This explosion of intelligence will lead us to a new perception of how we see the world. 2018 will be the year where we start to see the impact of the technology we have created.

Furthermore, in 2018 we could see revolutionary breakthroughs in quantum computing. Silicon could be rendered obsolete – we will welcome new ways of processing data. Moore’s Law may no longer apply, but the law of accelerating returns still does.

Netscape 1.0 and the internet paved way for the ups and downs of the web era. That ended in 2006 and moved on to a ten-year mobile/app era, this was harmless. In 2017 we started the next chapter, the AGI and quantum computing era – this is where the real change caused by technology will begin.

The knowledge hype is on. The complexity of the world will become transparent. How little we understand will be revealed. This will lead to frustrations. The dilemma, stated by the great Bertrand Russell, of the intelligent being anxious and the stupid self-confident, will influence our social and political systems more than ever. As the level of frustration rises, we need to find ways to cope with the permanent revolution and change. How can we learn how to expect the unexpected? Whatever is thrown at us, we need to embrace it and create new models
and questions.

Bitcoin is the biggest bubble in history. Although it dropped to around $11,000 as Dialogue went to press, we still should remember we started out 2017 with Bitcoin being worth approximately $1,000. Eventually – even if it goes up to $50,000 – the ride will come to an end, particularly given China’s determination to clamp down on its trade. Despite that, Blockchain and cryptocurrencies are here to stay, yet the illusion of a democratized world built on the blockchain will not happen quickly. The bubble will eventually burst and it will be the biggest financial shake-up in history. Maybe not in 2018, but it will come – either by the underlying forces of the market, or through needed global regulation. With other strong forces in place, it might bring us a financial crisis like we have never seen before.

Remember the early dreams of the internet and social media? The global village. How did that work out? Young men building a system designed to bring human beings together ended up increasing antisocial behaviour. And democratized? In fact, thanks to the consolidation of Big Web among the big players such as Alphabet, Apple, Amazon and Alibaba, corporate power has never been more centralized. We must be cautious. This rapid consolidation narrows the breadth of the world’s economic portfolio and limits the size of the crisis we can bounce back from. As the pendulum swings higher and faster, the outcome will be more radical.

The end of the start-up

Successful business owners and politicians are still talking about ‘digital agenda’ or ‘digital transformation’ and ‘the start-up era’ – but this will soon be stone-cold dead. The Klondike years of start-ups are over. 2018 is the year that the start-up hype comes to an end. And what about those simple new ideas? Forget any romantic notions, because they are not going to happen! The problems that the world needs to solve are hypercomplex. They need huge amounts of data and thousands of the brightest minds working together with the most complex algorithms. Therefore they can only be solved by the largest corporations.

Don’t get me wrong, it is still about creativity and creation, but there are no eureka moments with shortcuts to fame and fortune. We are back to the days of hardcore entrepreneurship. Trying things. Leadership, management and execution all need to be world class for businesspeople to thrive in the new era. Courage is also required – being prepared to fail. 2018 is the year of entrepreneurs.

— Anders Indset is a business philosopher, author and public speaker