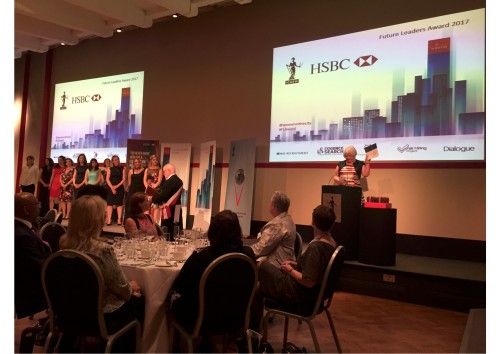 Recognizing exceptional leadership potential women in the UK, the annual Women in the City Future Leaders Award was last night bestowed amidst rounds of applause and inspirational speeches. As official media partner for the third year in a row, Dialogue brings you up to date with the evening and the award-winner.

An evening of glitter, tradition and applause, the Women in the City Future Leaders Award was celebrated in all its glory.

Hosted at the Chartered Accountants Hall in London, the evening followed City Tradition: all guests were greeted by The Master of Ceremonies, and crisp pink champagne toasts were made to the Queen, the Royal Family, the Lord Mayor, and the Corporation of the City of London.

As guests took their seats, keynote speaker Kate Philp made her way to the podium. The first British woman to lose a leg in combat, Captain Kate Philp of the Royal Artillery is now a leadership coach who, in another life, graduated from Oxford University and, since her injury, has even raced across the South Pole with Prince Harry. Her message was inspirational:

“Leave with the courage to explore, and expand your comfort zone.”

With the judges leaving to deliberate their ultimate winner, dinner was served and guests could share, celebrate and network.

As the meal drew to a close, the judging panel returned.

To tumultuous applause, the audience was presented with their 2017 Women in the City Future Leader: Dr Jane Cunningham.

Speaking about the judging panel’s decision, Dan Howlett, Head of Large Corporates UK and Regional Head of Client Coverage for Europe, HSBC, said that Jane stood out for her “clarity of vision, intelligence, boldness and balance.”

Click here for more details about the Women in the City Future Leader Award, this year’s winner or to apply for next year’s award.

See you next year, and congratulations to all!