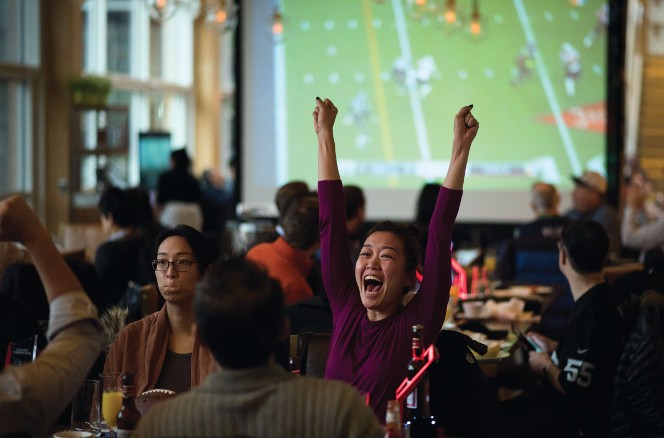 The 2016 Super Bowl broke with tradition. Instead of the National Football League billing the climax of the season in its conventional roman numerals (this year’s showpiece would have been Super Bowl L) it opted to mark its 50th anniversary in golden Arabic numerals – and Super Bowl 50 was born.

The golden theme was fitting – because this was the richest Super Bowl ever. An average 111.9 million people watched the game. A 30-second TV ad slot reached $5 million, a price many companies were happy to pay. But away from the razzmatazz, a cool analysis of the proposition raises questions as to whether buying that airtime was a winning play.

Consider this simple formula. Only 2% of the Super Bowl audience are what we at JD.com – China’s largest online retailer – consider ‘relevant eyeballs’, consumers who are likely to buy from us. That means a $5 million, 30-second ad slot buys a real audience of just 2.24 million relevant customers. Let’s assume only 5% of that figure converts into actual buyers, bringing the cost per acquisition in at almost $45 – a golden price indeed.

Digital advertising offers better value, is more efficient, and is better targeted. By June last year, China reached 710 million active internet users, approximately half its population. The average time spent on the internet by these users was 3hr 24mins on desktops and tablets, and a further 2hr 30mins on mobile phones. Internet usage had surpassed TV viewing by 2014, according to eMarketer data, and was on course to surpass all traditional media combined last year. Crucially, of the vast and growing time Chinese consumers allocate to internet use, 1hr 27mins a day is spent on social media.

So how are we reaching the millions of ‘relevant eyeballs’ that use social media everyday? Our strategic partnership with Tencent – owners of giant social networks WeChat and Mobile QQ – holds the key.

Aligning consumers with social media is a powerful way of promoting products for JD, and vendors and merchants doing business on JD.

For example, using WeChat Moments – where users can share pictures, video and other media – the symbiosis between JD.com and Tencent has proved a powerful marketing tool for beauty brand SK-II. Users can pre-order new cosmetics from the supplier on WeChat, follow SK-II’s official account, or ‘like’ its products, thus making its digital footprint richer and enabling even better targeting. Not only can JD.com reach out to core customers who had bought SK-II products over the last year, it could market to two further groups: so-called ‘engagement users’, who had commented on, followed or liked the official WeChat page of SK-II; and ‘fans’ of the brand – those who had followed or liked news from the cosmetician’s brand ambassador.

This targeting was the start of a closed-loop experience, which led SK-II core customers to a purchase page embedded on the WeChat platform, where they could buy products from JD.com.

Video messages about the product were sent to the ‘engagement users’ and ‘fans’ of the brand, who were then directed to SK-II’s official WeChat page so that those who were not already followers could become so, thus locking in the customer base within the social platform where the brand has total control over future marketing endeavours.

So what were the results? ‘Campaign Days’ – in which direct promotion to the SK-II target groups was pushed out – have been extremely successful. Some 20,000 followers were added over the 24 hours – that’s as many as would normally be expected in two months – while sales of SK-II cosmetics were five to six times the norm (see Figure 3).

The fusion of JD.com’s retail power with the networking force of WeChat has been extended to several global brands. Leading Korean tech brand Samsung, French cosmetics giant L’Oreal, and US consumer goods multinational Proctor & Gamble, among many others, have all benefited from better targeted campaigns through the partnership. The experience has proven that precision targeting is both achievable, and tremendously effective.

So what’s next? In an age where consumer behaviour can be understood in real time, the challenge is to extend these marketing efficiencies to channels beyond social media, to other digital media, including video, news portals, satellite radio, out of home media, and – yes – television. How will this be achieved? Blanket, scattergun TV advertising that we saw at Super Bowl 2016 is gradually losing traction. By the time the event celebrates its diamond anniversary in 2026, so-called ‘addressable advertising’ on digital content providers and internet-based ‘over-the-top’ TV will be well established, with different groups of consumers seeing different ads, targeted directly to them. Retailers and social networks that have led the way in targeted social campaigns stand to be at the forefront as that exciting change plays out. Stay tuned.

Joey Bian is head of ad tech strategy and innovation at JD.com