Dialogue Q4 2018 is out September 1. Here is what you can expect, from the desk of Dialogue editor, Ben Walker 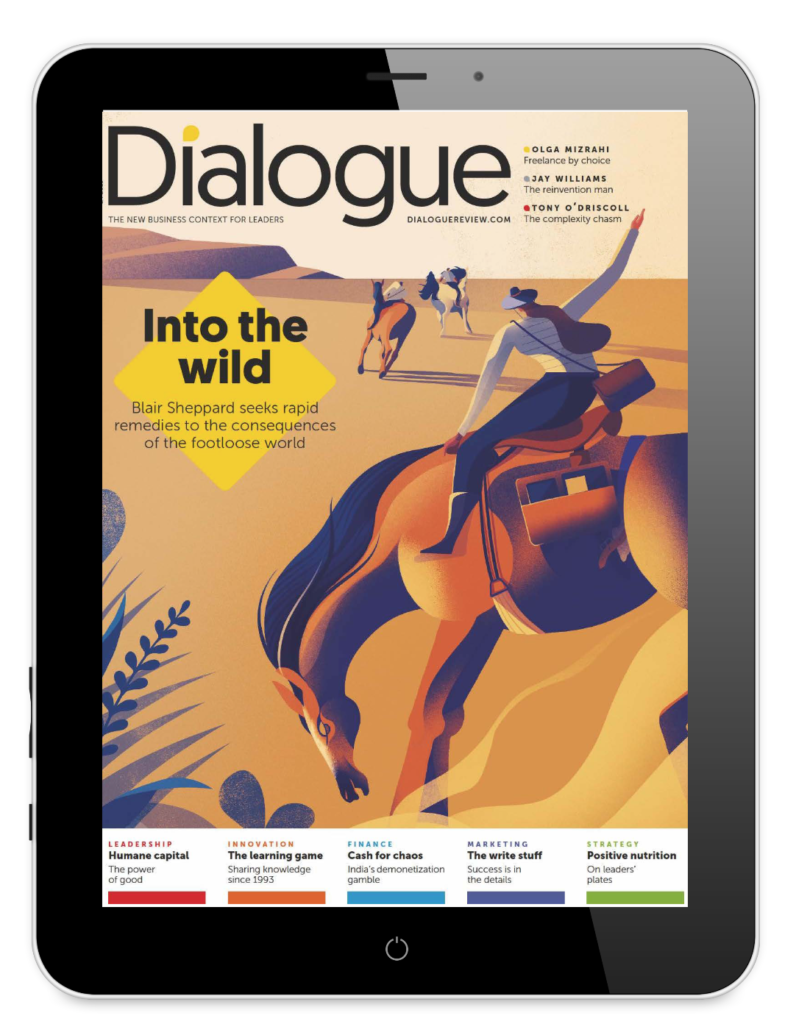 The late, legendary film critic Roger Ebert didn’t much like Footloose. “A seriously confused movie that tries to do three things, and does all of them badly,” he wrote at the time. Film reviews aren’t always good predictors of box office performance. Footloose went on to gross over $80m in US cinemas alone.

The danger of the footloose world, this issue’s Focus topic, is that it is economically successful in terms of overall global wealth, but fails in other respects. Globalization, as Ebert might have had it, risks being a seriously confused idea that tries to do several things – unshackle businesses, liberate workers, and open up markets – but does all of them badly.

Our cover star, Blair Sheppard, fears that an increasingly footloose world is a catalyst for an exacerbation of inequality and a collapse in fairness. Sheppard is not opposed to inequality per se – indeed he makes the case for it – it is the structure of the new inequality that concerns him. Rapid solutions are required, he argues. His suggested remedies are required reading for those at the top of companies, public bodies and governments.

Yet some will succeed in the footloose world. Olga Mizrahi shows how talent is going freelance by choice. For many professionals, the gig economy isn’t a merely bearable replacement to a full-time job, it’s a clear preference. This poses challenges for employers. The best freelancers can pick their clients. Employers that make themselves freelance-friendly, and embrace suppliers as part of their corporate family, will secure the best talent.

Heather McGowan and Chris Shipley suggest that life as a freelancer might prepare you better for what’s next. Certainly, they say, freelancers are much more likely to invest in updating their skills than are full-time employees. Learning, McGowan and Shipley contend, is the key to the future of work: companies must institutionalize learning – by making it a core goal of the organization. Set out to discover your employees’ hidden talents – in a changing, footloose world you might soon need to use them.

One man who discovered his own hidden talents is the basketball-pro turned leadership-speaker Jay Williams. I first encountered Williams at last winter’s Training Conference & Expo in Atlanta. I found his ability to captivate an audience remarkable. There, I learned of his story, a traumatic ordeal that began with a career-ending motorcycle accident. Yet his reinvention inspires others to their own renaissance. When I challenged Williams that few people will endure a similar ordeal that forces them to change, the former Chicago Bulls point guard countered with a profound response: “Many people have their own accidents,” he told me, “they just choose to suppress them.”

Tony O’Driscoll’s superb exploration of the complexity chasm begins with an accident that would have been infinitely worse had the hero of the hour acted differently. Chesley ‘Sully’ Sullenberger’s expert ditching of US Airways Flight 1549 in the Hudson River – saving the lives of all 155 people on board – became known as the Miracle on the Hudson. It was no miracle – it was down to the skill and competence of the pilot who found a moment of clarity amid the complexity. O’Driscoll exposes the need to reframe, rewire and reconfigure as complexity grows. That’s great advice to leaders looking to make sense of, and succeed in, the footloose world. Many futures are possible. Enjoy the issue.

–– Ben Walker is editor of Dialogue