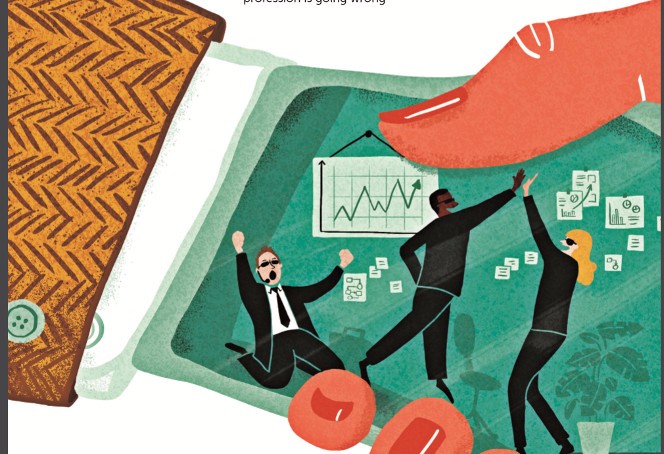 The secret to success in key account management is knowing where the profession is going wrong, write Nic Read & Ben Laker

In the wake of the 2008 global financial crisis, companies slashed costs to gain profits. After trimming the bottom line to the bone, attention shifted to the top line. Selling became mission-critical, especially in the area of key account management (KAM) where the largest or most strategic customers are handled.

Yet the sales function is often viewed as a dark art by executives. Despite its impact on revenue and share value, its inner workings remain unregulated and standards-free. Seeking to demystify its best practices, researchers conducted face-to-face interviews and surveys with 1,100 key account managers (KAMs) in the UK’s information communications technology industry. Views were correlated against a separate study. The second study asked executive buyers which skills and personal qualities in suppliers led them to elevate the suppliers to trusted adviser status.

So what did the research find? Here are some of the less obvious challenges companies should anticipate when building a KAM function, and the approaches to create positive outcomes.

KAMs serve tenures that are five times shorter than the national average for all staff. This affects customer retention, team cohesion and longevity of the sales culture. Two culprits stand out:

KAMs play the long game, try to be more strategic and operate on longer business cycles. Yet success is often measured using metrics suited to shorter transactional sales. Being accountable to standards that don’t fit the role creates friction, and means the actions that do matter can go unmonitored and unheralded. Interestingly, when asked what makes them effective as sellers, 660 of 1,100 KAMs ranked personal gravitas and grooming as key traits, yet the same factors rate low on the scale of what executives look for in suppliers.

High-performing KAM teams regularly refresh their job descriptions, team structures and success measures to ensure they stay relevant. They avoid guesswork and ask buyers what they want to see more of in the relationship. They steer clear of defining a key account solely by how much money the client spends.

Other factors like growth potential; willingness to test new products; industry influence; being a marquee brand others follow; or being an important stronghold for the competition all feature in the decision to target a company and bestow key account status.

It’s common for the best KAMs to be promoted to lead a team, and retain a personal selling quota. Executives may think this is the best of both worlds, but the practice typically ruins both the leader and the team. Split roles create conflict as to whose interests are prioritized when pressure is on to close business.

High-performing KAM teams have leaders whose behaviour fits the role. They are given a team target to achieve, but no personal quota. They grant each member of their team no less than three hours of skills coaching each month, plus run monthly reviews of pipeline, accounts and deals to ensure activity is optimized. They jealously guard their KAMs’ time, protect them from excessive red tape, and fight for the resources, pricing or contractual terms needed to retain and grow the accounts managed by the team.

There is a tendency for KAMs to see their job as maintaining an existing contract more than ‘pushing their luck’ for new growth. While they play it safe, competitors bombard their customer with compelling ideas in an effort to land and expand. When a client lets a competitor through the door because they aren’t aware their existing supplier offers those products and services, it can cost dearly.

KAM relationships are often vested in a small cadre of people on the buyer and seller sides for reason of administrative convenience or politics. Buyer-side managers demand “don’t call over my head”, and vendor-side managers shout “run decisions past me first”. Such narrow channels create bottlenecks and single points of failure that stagnate information flow and inhibit action. They elevate risk if relations deteriorate with any one person or department.

High-performing KAMs play along with gatekeepers and bosses, but also cultivate a virtual team of connections to whom they delegate conversations and actions. Just like a spider on a web, the more strands they cast out, the stickier the relationship becomes, and the more often the KAM hears emerging needs that they can respond to.
Having metrics for networking, cross-selling and penetrating an account are absolutely fundamental.

B: Reluctance to pitch

KAMs aren’t always comfortable presenting unsolicited ideas to key accounts. It’s common to hear them describe their role as ‘farming’, yet completely ignore the need to plough fields and plant seeds (prospecting). KAMs agree it’s important to grow key accounts, yet not all can show where they’ve attempted to do so. The prevalence of such gaps imply many KAMs see their role as being excused from prospecting efforts.

High-performing KAMs unapologetically prospect and market new ideas to their contacts. They stay informed on current affairs in their customer’s industry, and monitor their account’s competitors for insights. They master the jargon of the client’s industry, and attend its conferences. They get into the practice of sending “have you seen this?” notes by email, and post copies of printed articles using handwritten notes to explain why they think it’s relevant. Their goal is to show they’ve personally spent time thinking about the customer’s interests, which gains reciprocal loyalty. When KAMs open an account’s hearts and minds, they also open budgets.

Who writes the key account plan? How often should it be shared with the customer? Should the customer help write it? What is the onboarding process for a new KAM?
How should they be selected? What metrics are appropriate? How should the KAM interact with personnel responsible for finance, credit control, contracts, marketing and customer support? Will reviews be run, and if so, on what topic, by whom, and how often? How should contracts be renewed and extended? When is it appropriate to sell new ideas? Though not a complete list, it can be seen there are a number of inputs and outputs in a KAM process that need definition and management. Two observations hold true:

Despite a recognition that planning is important, KAMs in the study could rarely produce a roadmap for how their department functions, nor show how guidelines, tools and metrics fit together as parts of a system. Instead, much of what passes for ‘process’ in the KAM function appears to be a patchwork of ideas cobbled together from internet slideware, books and seminar manuals. It’s not uncommon to see key account plans so dense with words and graphs they are only wheeled out when the boss wants to see a plan exists – they are too unwieldy for daily use.

High-performing KAM programmes map how each cog should turn, then assemble the machinery. When it comes to the key account plan itself, high performers believe in mutual disclosure with multiple people in the account. If client personnel don’t know a planning document exists, or don’t recognize it as ‘their plan’, it won’t help the KAM build rapport, trust, or the business case to explore new ideas. The best plans are as lengthy as they need to be, and avoid the temptation of bulking up to look clever. The simplest plans focus on three areas: the relationship plan, the revenue plan and the action plan.

Not all salespeople are suited to a KAM role. It’s traditional wisdom that ‘lone wolf’ sellers don’t always play well in a team, and ‘deal closers’ who thrive on the thrill of the chase can get bored in a slow-burning KAM role. These traits lead to some sellers being passed over when a KAM role is available. However there is growing evidence that diversity is the key to success.

High-performing KAM leaders recognize people have different strengths, and play to these. Not everyone is a persuasive presenter or convincing closer. Not everybody is inclined to do account research or plan their meetings. But where people are not expert in all areas, they are often very good in a few of them. This is where the KAM function is undergoing an exciting renaissance. Teams are increasingly being assembled for the sum of their parts, with specific people engaged to complete the tasks they excel in, like in a production line.

To explain this, consider the Mission:Impossible film franchise. Tom Cruise’s character receives a mission brief. He forms a plan and determines what skills are needed to execute that plan. Next he checks a talent database and assembles the team best suited for that mission: master of disguise; fast driver; explosives expert; technical genius. Mission accomplished.

In practical terms, one KAM always serves as the main face to the customer. But for different tasks such as processing administration, researching industry trends, dealing with support requests, handling conflict, pitching new business, or negotiating terms, others from the team take the lead.

For this to work, attention must be paid to cataloguing the company’s pockets of skill so an accurate talent map can be listed. KAMs must learn to lead a virtual team of people over whom they have no authority. Rewards must shift from the individual to the contributing team.

The cultural and operational shifts required to support these new trends are significant, but so are the rewards.