The difference between the Mark Zuckerbergs of the world and the average person on the street is just the ability to turn that opportunity into an idea, and that idea into a business.

Remember that Facebook’s early years weren’t bountiful, they were just cool. But over time, Facebook was able to work on the human desire to build a social fabric, the connection with other individuals which created something more powerful, more meaningful in society. It directly worked with the core human need of belongingness.

The overwhelming reality that confronts all ideas is that more than 99% of them fail. But failure doesn’t have to be on the negative side. With the right culture and frameworks, failure turns into a series of lessons. And, in time, it helps refine an idea to meet a market need.

The challenge when we see an idea is how do we document it? How do we structure it in a way that we can share it, test it, pursue it? How do we believe in it enough so that we will dive head first into the world of entrepreneurship to pursue that idea, even if it’s only
part time?

One of the simplest ways of making an idea, and testing an idea’s meaning to society, is a simple process of ideation:

1 Who is your customer?

2 What are they trying to achieve?

3 What are they already doing in an attempt to achieve that goal?

4 What pains, barriers, or obstacles are they facing in achieving that goal?

Those pains and barriers could be affordability, accessibility, training or intelligence requirements, or a missing technology. This is where opportunity really starts to manifest as we see what’s needed to help these people pursue that desire. This could be as simple as wanting a pink drink product. It could be as complex as a new medical device. Whatever it is, it needs a deep connection with a human need and a market need before it’s even worked on, before it’s invested in heavily with technology or capital venture.

Borrowing from the world of The Lean Startup by Eric Ries and the world of design thinking, I’ve created a simple ‘ideation framework’ that helps convert ideas into business concepts that can be tested. In Steve Blank’s book The Four Steps to the Epiphany, he outlines the need to “discover and validate” before executing an idea. The validation process focuses on the investigation of problems and the demand for solutions to them. 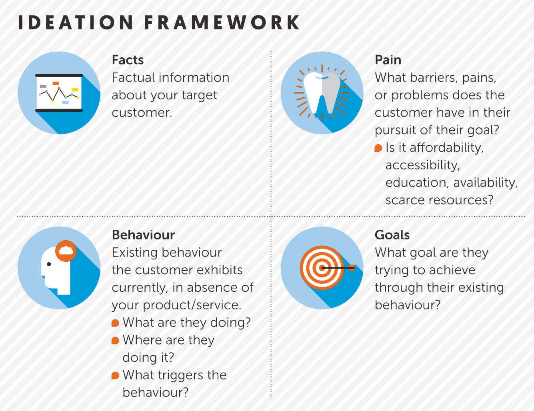 In Figure 1, we have the ideation framework, a structured way to document an idea and prompt the necessary questions. Use the table to answer a series of structured questions, to logically lay out your idea.

Now we use the framework to derive the hypotheses to be used in the validation process. At the core of any business idea is a core hypothesis about the target customer, the specific need it meets, and how the product or service meets that need. So we have three hypotheses:

By completing the ideation framework, you’ve already done all the work to create the hypothesis. We just need to extract the right insights
for each:

To get an idea executed we need to work with a customer base known as the ‘early adopter’. An early adopter is already consciously aware that they have a problem, and is exhibiting behaviours in an attempt to solve the problem themselves. Take, for example, smokers who are trying to kick the habit. Early adopters in this case are those who are already trying apps, programmes, drugs, and so forth in the attempt to quit, but haven’t yet succeeded.

The mistake most individuals with ideas make is focusing on mainstream markets too early, where customers aren’t yet aware they have a problem let alone are trying to solve it.

It’s more effective to work with a customer base that actively wants a problem solved, rather than to convince a mainstream consumer they even have a problem.

By using the known facts of the customer, along with the known existing behaviours, you can quickly build a profile of which customers to engage first, and where to engage them.

For an early adopter, a problem hypothesis focuses on their inability to achieve a known goal. The barrier to success could be a lack of technology, absence of sufficient information or education, lack of resources like money or time, an inability to access a solution, or many more. So your problem hypothesis is drawn from a known goal, and the obstacles that prevent them from achieving it.

Solving a problem isn’t about the technology or buzzwords you use. It’s about connecting a solution to a known – i.e. validated – need. Extracting from the ideation framework, and only the framework, we can structure a hypothesis on how we will solve the customer’s problem, thus validating the need for a solution.

— Scott Bales is a global leader in the ‘digital shift’ – encompassing innovation, culture, design, and mobility in a world gone digital