A psychological methodology for measuring individual and company cultures shows that the staff are often leaving their morals at the office door. Your business could be damaged if you don’t find a fix

Is the culture of your organization a problem? Do you employ people who leave their morals and judgment at the office door? Do you have a Mr Hyde problem? We found that many companies do.

Culture in organizations is crucial. Yet it is very difficult to evaluate. Anecdotal cultural indicators are all around you, but how do you compute that evidence? True, you can ask general questions. Do employees feel unable to challenge their managers? Are meetings organized so quiet, thoughtful types are drowned out by bold, outspoken ones? Even softer signifiers can be indicative: are teammates ignorant of the names of colleagues’ partners and children? You might know the answers to some of these questions yet miss other signs elsewhere. Culture is key – but it is notoriously hard to measure. This is a problem.

This absence of robust evidence causes difficulties for business because what is hard to measure is hard to change. Take the aftermath of the banking crisis. Regulators wanted to improve risky, short-termist corporate behaviour. But they faced a mammoth challenge: telling senior executives to “fix their culture” sounds reasonable, but leads to serious problems when both parties struggle to understand what is meant by culture, have difficulties in identifying it, and fail to agree what positive changes to it should look like. Regulators’ imperfect understanding of companies’ culture, together with a lack of forensic tools to assess it, often means their interventions can cause more harm than good.

There is another way. The MoralDNA (MDNA) diagnostic tool is a scientific approach to measuring and analyzing company culture. It focuses not on employees’ anecdotal behavioural patterns but instead examines what drives those patterns. Are your people driven by: rules (the ethic of obedience)? principles (the ethic of reason)? And how much concern do they exhibit for the outcomes of their acts (the ethic of care)?

Companies we have worked with found MDNA results informative and, in many cases, shocking. Staff in the worst-affected company cultures exhibited a Jekyll and Hyde approach to their lives, changing personality once they arrived at the office. Where many were caring, good parents, and loving friends, they became heartless automatons in the workplace (see Figure 1). Instead of using their own judgment, they slavishly followed the rulebook.

Rules are rules, you might say, but we found that the outcomes of such robotic compliance were generally negative. People were simply less caring about outcomes at work than they were at home, a problem that got worse as they climbed the seniority scale. Managers – ostensibly hired for their instinct and judgment as well as their skills – were divesting themselves of the moral responsibility to make good calls. “Too many employers fall into the trap of relying on layers of rules and regulations to say what people can and can’t do,” Ann Francke, Chartered Management Institute chief executive, says. “The result is that people act like robots at work, using the letter of the law as an excuse not to engage their hearts and heads when making decisions. We need to start caring about the impact of our actions.”

Why aren’t rules and frameworks enough? Why should care, judgment, and the application of emotional intelligence matter? “To be successful, organizations have to meet the needs of their customers, employees, suppliers, and other stakeholders,” says Francke. “If the values and behaviours of those managing and leading organizations are out of kilter with those groups, they won’t be run in a way that properly serves customers and stakeholders, or gets the best out of employees. In short, they’re destined to fail.” 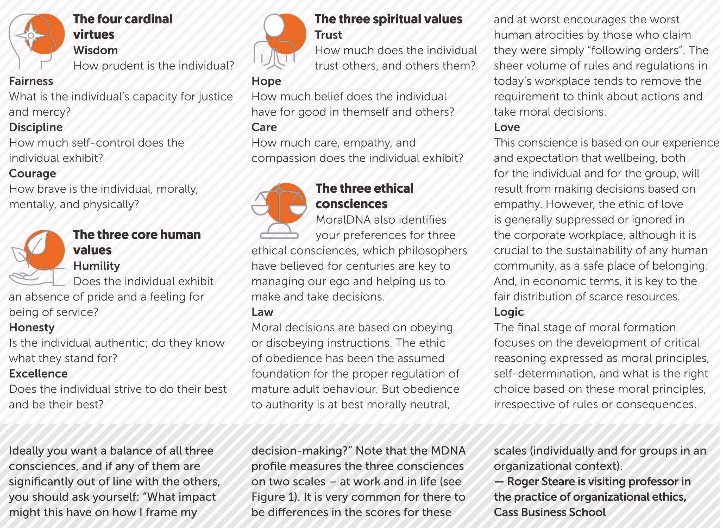 In AD 50 Tacitus warned that “the more rules, the more corrupt the state”. The ancient Roman historian might have been talking about 21st-century western companies. The focus of many managers on compliance with rules, rather than the application of strong values, impacts on companies’ management of risk, a determinant of success in many industrial sectors. Feedback on this aspect of MDNA among senior executives at two major clients we work with has indicated concern at the variations in reported behaviours. They questioned how, if people are not bringing their ‘authentic’ self to work, this may influence their attitude to risk-taking. Are they less likely to challenge instructions as long as they can claim to operate within the rules? Rules mostly tell people what they cannot do – not what they should do. 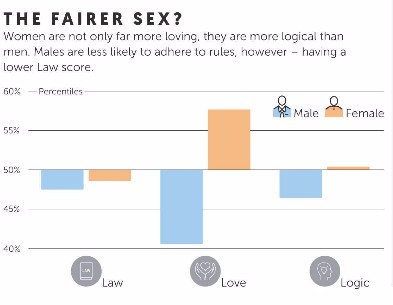 Do the RIGHT thing

It is not practical to ask most corporates to throw away their rulebook. But when we work with clients we demonstrate the ways in which slavish compliance has damaged their peers, and pose a challenge. What, we say, does it take to do the right thing? Most executives we ask walk into a trap. Ask yourself the following questions:

Are you doing it in the right way? (How well risk- managed and ethical are your operations?)

Are you doing it for the right reasons? (Can you justify your licence to operate?)

The answer to each of the above may be a qualified yes! But is this enough? Not necessarily. Imagine the shock in sessions with clients when we point out that most totalitarian regimes – including Nazi Germany – would answer yes to all three. Many city speculators and traders would give a trio of affirmatives at the end of a successful day, regardless of what damage they may have caused. The point is, you can justify most courses of action under the above formula but that does not mean such acts are right. Why? Because there is a fourth question:

Is what you are doing based on the right moral values? This tie-breaker exposes the incompleteness of the three earlier questions.
The word RIGHT itself is a useful mnemonic. It stands for:

R-ules – do we know and operate within them (letter and spirit)?

I-ntegrity – do we act out all the moral values which make up integrity?

G-ood – is our decision-making intended to do good – and for whom?

H-arm – will our decision-making cause unintentional harm – and to whom?

T-ruth – can we honestly stand behind our decision with a clear heart?

Given the evidence we have gathered, many leaders may decide they want to systematically assess their company’s culture, then create a framework for decision-making using the values-based RIGHT approach. There is a strong inverse correlation between the ethic of obedience and the ethic of reason (see panel) – the more people make mindful, thoughtful, good decisions, the less you need compliance with rules. The converse is also true – the more people blindly comply with rules, the less they will think about their actions.