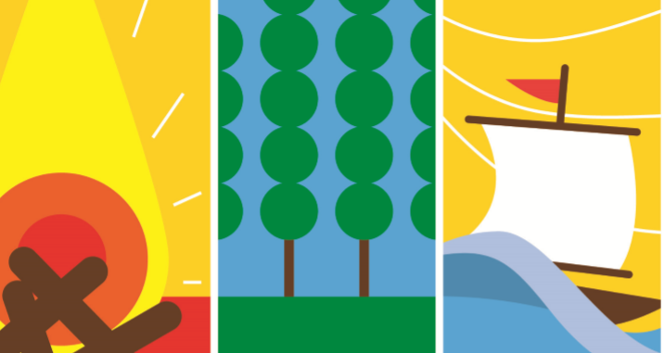 Much of what is needed has already been created. To innovate for the future, you must be able to see it

History is no longer a guide to the future. This is how it used to work: once in a blue moon, a major discovery was made, or else something transformative was invented, and the human existence advanced on the back of it, in one giant leap. Think of the effect the discovery of fire had. Winters became tolerable. Food could be cooked and, thus, rid of many poisons. Night times became active. Lives rapidly lengthened. Agriculture helped us feed our rapidly growing, maturing population. General nutrition levels rocketed. Lives became healthier and happier. The invention of sails triggered international travel. Powered flight made it exponentially quicker. Lives become wider; richer.

Yet if we saw just one such milestone in our lifetime we were among the lucky spectators of history. The big difference in the digital age is that we see one milestone almost every year.

The convergence of new technologies – for this is the golden age of creation – means forecasting human needs beyond the next five years is a troublesome, yet crucial, exercise. I have previously written in these pages that many of today’s children will never drive a car because, by the time they reach driving age, most cars will be able to drive themselves far more proficiently than most humans can. Thus, the need to learn to drive will become the preserve of the enthusiast, not the commuter. Hold that thought. If one of the fundamentals of adulthood – the traditional coming-of-age milestone of gaining a driving licence – is superfluous, what else will be? The answer is: quite a lot. To create things that people will need in a decade or two decades, inventors must recognize that they will need a lot less. Those who want to create for the new landscape should know what it is likely to look like.

Owning a car is no longer a status symbol for everyone – to the young it is a sign that you live in the backwoods. Many wealthy Londoners and New Yorkers don’t invest in a costly, rapidly depreciating asset anymore. They just hire a brand new, state-of-the-art automatic vehicle when they want one. If they can’t be bothered to drive, or fancy a drink, they call up an Uber at a fraction of the price – and twice the convenience – of a black or yellow cab. The result: for urban dwellers, the whole motoring experience just got rapidly better and cheaper. Think about that. A lot of people have no need to own – or even drive – a car anymore. Old, cramped, inefficient cars are becoming worthless.

Motoring is just one example of how cost-effective service excellence is rendering expensive ownership redundant. As we get better at extracting what we need to live, and finding new ways to create it, life will become radically cheaper. There are huge benefits to this. It may sound hyperbolic now, but it will soon become apparent that a comfortable life will be within reach of nearly everyone on Earth.

The successful products and services of the future will ride the new wave of efficiency. Think of technologies that allow doctors to analyse ten to 20 times as many images in a day than they do now; of self-driving cars that can be pooled among 20 leaseholders; of shopping services so rapid that goods can be drone-delivered to your door within an hour of order – without any need for you to sink time at the mall.

Creations that help people help themselves will succeed

The barriers to entry in a whole raft of sectors are gone, or going. Invention has put paid to many of them. Want to start and market a business? An off-the-shelf do-it-yourself website looks the part and costs a few dollars. Many of us are already checking our own heart-rate and fitness using smart watches and user-friendly apps: self-diagnosis in healthcare will become ever more sophisticated. What about making stuff? 3D printers were once the realms of science fiction, then the expensive toys of super-rich geeks; within a few years they will be in every garage. Smartphone mount broken on your road bike? Why buy one when you can download a plan from the internet and just 3D-print one? Modular software, self-healthcare, 3D-printing… the greatest creations of the modern age are those that help people help themselves.

The successful creations of the near- and mid-future will help people serve themselves. Learning devices that foster the rapid, easy, gain of know-how will be popular. Robots that perform menial duties that once cost the earth to hire-in will sell to all-comers. Software tools that make starting your own enterprise ever easier – navigating tax law, linking supply chains, automating the search for customers – will bring their creators riches. Innovators should concentrate their efforts in creating products and services that help others advance their own lives.

We will soon have too much of everything. As rapid innovation and rapid cost-decreases reduce the price of everything, our problems will arise from consuming too much, rather than too little. For all the focus on poverty and malnutrition, the diseases of affluence – obesity, diabetes, cardiac arrest – are the biggest killers in much of the West. And the developing world is catching these plagues as it adopts the Western diet. The prognosis gets worse: falling prices of junk food mean its consumption is likely to rise, pretty much everywhere.

The overload in our stomachs is mirrored by the overload in our ears, and in our brains. The march of social media and 24-hour communication is degrading our attention span and rendering us unable to concentrate, so incessant, many and various are the calls on our time. In all segments of life, abundance will become a much greater challenge than scarcity.

Innovators should focus on creating products and services that allow users to escape information overload and reduce their consumption of suboptimal or irrelevant content. Products that foster better selection – less quantity and higher quality – will succeed. Curation tools that hone and handpick from information streams will do well. Digital concierges that navigate consumers quickly and effortlessly to the best food and drink, and away from the mediocre and the unhealthy, will thrive.

Automate and computerize everything before someone else does

Sentimentality will get you nowhere. Anything and everything that can be digitized soon will be. The story of digitization is one of natural, logical progression. It began with words and numbers, then morphed into games, before – and we forget how recently this change arose – becoming the standard format for rich media such as movies, images and music.

The march of the machines has swallowed up much more. Complex business functions, medical tools, industrial processes, and transportation systems are all entering the digital space. Inexpensive sensors that can monitor pretty much everything are becoming commonplace. Empathy is a quality robots cannot yet command, but they are already capable of undertaking the functions of basic daily care. Everything that can be reduced to binary code will be.

There may remain niches for old-fashioned analogue products – vinyl records have just scored their best year in two decades. But the market for retrograde goods will always be limited. Creators should examine things that are not yet fully digital and explore how they can be made so – before their competitors get there first. Think about communication: how could virtual business meetings be made more real? Why do trains still have drivers when several networks around the world – such as London’s Docklands Light Railway – have been using driverless locomotives successfully and safely for years? Every time you buy a paper ticket for a transport network, show or movie, remember that such processes can and will be superseded. Will human waitresses be needed in ten years? There will be an android for that.

People won’t just wear your inventions, your creations will become part of them

The cyborg is living in the present day. Implanted retinas already use silicon to replace neurons. Custom prosthetics that operate with the help of software are already personalized parts of humans’ bodies. The military will use computer-guided exoskeletons in the next few years. On the domestic stage, exoskeletons are expected to become a tool to aid the mobility of the elderly and disabled. Sleep apnea mouthpiece reviews are already mentioning a future where smart technology will report back to a mainframe, keeping sufferers safe. The future and it’s technology will truly extend our lives.

Meantime, real-time health feedback will see us tattoo sensors into our bodies to track key health indicators. The information those sensors gather will be transmitted instantly, and wirelessly, to our phones. The once-controversial Google Glass will eventually seem like child’s play – expect Terminator II-style head-up displays born of retinal implants before too long. When part of you is machine, how human are you? The philosophical dimension will keep thinkers awake at night. Meantime, innovators will get busy.

Wearable technology is just the beginning of a revolution. Creators of the future will consider the human body as a land of opportunity. Embedded tech that helps people excel physically and mentally will make innovators rich. Super-tasting nasal implants. Babel fish-style in-ear translators. Telescopic retinal adaptors. They were once the preserve of comic books. Some day soon they will seem mundane.

Vivek Wadhwa is distinguished fellow at Carnegie Mellon University’s College of Engineering. This article is based on ideas in Vivek’s book (coauthored with Alex Salkever) The Driver in the Driverless Car: How Our Technology Choices Will Create the Future.