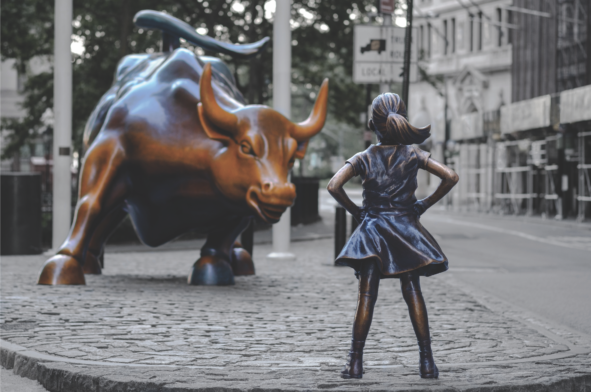 In 2014, I decisively left my job as an investment banker and embarked on the most exciting, powerful, hard and important adventure of my life: founding and growing Fearless Futures.

Fearless Futures is an education organization that works both with senior leaders in business and with young women and non-binary young people in schools, to whom we offer equality and leadership development programmes. I set up Fearless Futures because, despite years of academic success, our society does not afford girls and women the status, opportunities, representation or power they deserve.

Many young women have low confidence levels because they see themselves as lacking. In fact, it’s the environment that is at fault. That is a central premise in our programmes: that inequalities have been designed, and because of that, they can be redesigned. We focus on challenging external realities rather than on the notion that it’s people of colour, women, disabled people – or those who experience multiple inequalities – who somehow need to do, or be, better.

We engage our programme participants in critical thought to help them understand and challenge the root causes of inequities. Through this, they grow new ways to lead and design transformative change, whether as leaders in their organizations, or in their schools. An example of our work is Jada. I first met Jada in her last year of high school, aged 17, during our Peer Power programme, which is comprised of eight sessions of 90 minutes over eight weeks. It includes a session where participants deliver a workshop – which they’ve created themselves – to younger students in their school.

I contacted Jada recently and asked about her memories of the programme. “Fearless Futures is unique,” she said, “because it does not shy away from difficult or complicated issues that need to be addressed but that most people don’t want to acknowledge.”

I firmly believe that this is an empowering and, indeed, essential context to provide to our young people. By starting from a point that acknowledges the external realities of injustice, we are able to clearly communicate to those we serve that this is not their fault. By surfacing the hidden messages that say that certain spaces are not for them, we can assert: your voice matters.

Our programmes also recognize the key notion that not all women’s lived realities are alike. Too often the default woman, in our mainstream narratives of importance, is one who is white, middle class, heterosexual, able-bodied and cisgender.

We saw this vividly with the #MeToo movement’s re-ignition. While Me Too came to dominate headlines around the world in 2017, it had actually been founded by Tarana Burke, a black woman, more than a decade earlier. It wasn’t until white, wealthy and beautiful women in their numbers said “me too” that the world started to take notice.

What’s more, when there were over 50 allegations of misconduct, Harvey Weinstein made retaliatory statements against only two of them. That the two were both women of colour – Salma Hayek and Lupita Nyong’o – is undoubtedly significant. When struggles accumulate and overlap, as here with racism and sexism, society’s power to de-legitimize increases. We therefore cannot focus on singular inequalities, like gender, in isolation.

This is key. Most of the young people we serve are people of colour and are from economically deprived backgrounds. But an Arab Muslim hijabi young woman will have different experiences of the world than a disabled black young woman. Acknowledging the particular nature of their lives is how we can build powerful solidarity for change and increase our capacity to take on the larger systems of injustice all around us.

Jada says, “I think much more critically about the world around me than I did before. I challenge myself, as well as the systems of oppression around me, much more than I would have before the programme. I’ve learned and continue to learn so much, from intersectionality to colonialism.” By equipping young people in this way, we are nurturing tomorrow’s game-changers.

Reflecting on our relationship and how proud I am today of Jada, I asked her about what the programme gave her. She said: “If it wasn’t for the programme and the amazing connection that I had, and continue to have, with the organization, I don’t believe I would have done half as well in my A-levels [UK school leaving exams at age 18], I don’t believe I would have gone to university, and I definitely know that I wouldn’t have graduated.”

In this sense, “the programme is not just content and knowledge focused,” she asserts, but “seeks to develop the people on the programme as well. It is all well and good to have knowledge, but if people are not going to do anything about it, it is rather pointless.”

She is right. Our “outside in” approach establishes an empowering context, where young people are already everything they need to be in the world.

The system just wasn’t designed for them. We can – and must – redesign it. And we see the dual reality: that designing a fearless future is both hard work and, as Tarana Burke says, heart work.

— Hanna Naima McCloskey is the founder & chief executive of Fearless Futures. She has worked for the UN, NGOs and the Royal Bank of Scotland